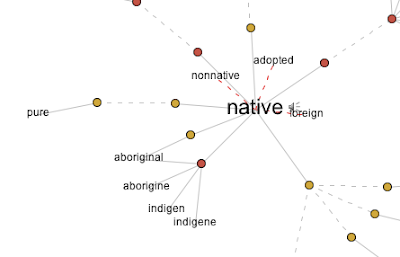 Palfrey and Gasser are not being negative. Their entire book is about promise: “And Digital Natives have every chance of propelling society further forward in myriad ways—if we let them.”[10] And yet they choose to describe “Digital Natives” as unitary, born differently, and completely outside “our” experience. They begin by describing an entire complex generation as outside of society-as-we-know-it. “Native” – as a word - carries significant connotations in American culture and American literature. The Visual Thesaurus[11] links it to words like “aboriginal” and “indigenous.” Wikipedia says, “However, in the context of colonialism - in particular, British colonialism - the term "natives", as applied to the inhabitants of colonies, assumed a disparaging and patronising sense, implying that the people concerned were incapable of taking care of themselves and in need of Europeans to administer their lives; therefore, these people resent the use of the term and consider it insulting, and at present Europeans usually avoid using it.”[12]  It should be fair to assume that two Harvard University law professors[13] did not choose this term out of naiveté.
These “natives” use odd and simplistic communication structures. They do not speak in grammatically (for English) correct sentences. Rather they “text” and “IM” and “tweet.” They lack sophisticated language and rely instead on ideograms, whether “lmao” or ;-) or even J. They lack the intellectual focus necessary for sustained straight line study. And, they are “born” to all this. In other words, they are exactly like the Native Americans and enslaved Africans white Europeans encountered in eighteenth and nineteenth century North America. Exotic, strange, and while interesting, dangerous. Surely no complex culture could be lying among those painted buffalo blankets or recursive stories told on the plains. Surely, if Africans are to display any possible intellectual heft they must learn to dress and speak like an Englishman.
Let’s go back to Carol Jago of the National Council of Teachers of English. Does she actually believe that, “Nobody has taught a single kid to text message”? Her statement seems to imply that she believes these children are indeed, “born digital,” and that these actions are genetically determined instincts, and not a skill set. This is a surprising view of Darwinist Theory indeed, but perhaps not unexpected in an educational system in which it is often accepted that “success in mathematics depends on some innate ability” (New Jersey Mathematics Coalition 1996)[14] Whether this “genetic origin” notion is used as praise (‘Asian students do so well in math.’) or slur (‘Black students will never go to college.’) the goal is to eliminate performance incentive for the teachers by creating a “nothing I can do” paradigm.
Carol Jago does not want to teach text-messaging, or she is incapable of teaching text-messaging, but her assertion that the teaching of how best to use a communication tool is unnecessary is absurd. We “teach” many things, from how to throw a ball more accurately to how to read specific genres to how to write more clearly. We teach them even if students arrive at school having learned about these things in other contexts.
“Ultimately, like other forms of marketing rhetoric, the discourse of the “digital generation” is precisely an attempt to construct the object of which it purports to speak,” says David Buckingham in a paper written for the Macarthur Foundation. “It represents not a description of what children or young people actually are, but a set of imperatives about what they should be or what they need to become.” [15]
Those who speak of the “digital generation” and of “being born digital” and of “digital natives” are not choosing a unique path. Much literature has been created defining “generation gaps” throughout US history, and the process of “othering” children (Howe and Strauss 1992). Surely the communications battle between the “Missionary” and “Lost” Generations, between those raised with books and newspapers and those raised on film and radio, between the earnest intentions of Upton Sinclair and the creative freedom of Fitzgerald and Dos Passos,[16] parallels the arguments we see today. But the lack of uniqueness can not be equated with a lack of destructiveness.
In an educational system that has consistently struggled with “the other” (Lareau 2000, Tatum 1997, Macleod 1987, 1995), embracing a notion which makes all students “alien” carries with it the likelihood of a complete classroom communications breakdown. And there is no faster way to create that sense of alienation than by othering the language of any group not holding power.