On a hill on the north side of the Monongahela River in Pittsburgh sits a remarkable public library. Actually not just a library, this incredible building, opened in 1898, includes a massive "Music Hall" and a full community athletic center, including a pool. It is a remarkable bequest to the "Steel Valley" community of western Pennsylvania from United States Steel pre-genitor Andrew Carnegie. But it was not just a good deed, it was a deep attempt at an apology.

The Library overlooks the waterfront site once occupied by the Homestead Steel Works, site of the nightmare Homestead Steel Strike of 1892, one of the low points of American industrial "democracy" - a moment when U.S. capitalists demonstrated exactly how little they thought of the society which had made them rich, and the U.S. government demonstrated that it belonged to wealth, and not the people. 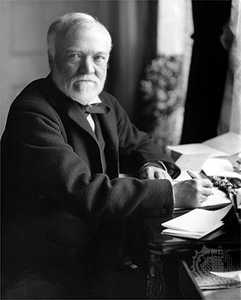 Andrew Carnegie wanted to get into heaven, and unlike today's Christian capitalists, he did not believe his ruthless pursuit of profit and failure to support his society via taxes would get him there.

So once he sold the world's largest steel-making corporation to J.P. Morgan, he devoted much of his life to making amends for his commercial life by giving his money away. Much of this effort was directed toward education in the United States and the United Kingdom. He endowed universities and, of course, public libraries, and he created a foundation which came to dominate educational research in the 20th Century.

The Carnegie Corporation - and the Carnegie Foundation for the Advancement of Teaching - funded, supported, and advocated for many commissions and reports which structured 20th Century education. Everything from the curricular structure of high school - in which Carnegie helped spread the Committee of Ten division and order of secondary subject matter - to the notion of high school credits and seat time ("Carnegie Units"), to the idea of generous retirement plans for teachers, were generated by these organizations carrying out the wishes of their benefactor.


Carnegie had massive wealth, and he used it to do the things which were important to him. Some seem like undeniable good works - those free libraries we all use. Others, the promotion of educational industrial standardization for example, now seem like disasters (and seemed disastrous at the time to educators such as Maria Montessori). This kind of agenda-setting power of the wealthy always seems a double-edged sword, but equally, it is always counter to the idea of democracy. Grand societal decisions occur via personal grants from an aristocracy, not through community decision-making or community effort. 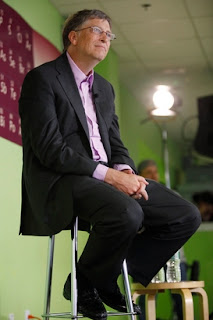 Fast forward 100 years, and now data management is to American capitalism what steel-making once was. Not the non-contributory wealth-making of financiers like Jay Gould (then) or a Lloyd Blankfein (now), but massive engines of production, jobs, and great fortunes. And today's Andrew Carnegie - in some ways - is Bill Gates Jr. No, he wasn't born poor like Carnegie (he followed a more conventional 20th Century path to massive wealth, leveraging the advantages of being born wealthy). And I don't think he is motivated much be the fear of going to hell. But he does imagine himself as the great capitalist benefactor of today.

And while we all might find his efforts on global health to be laudable - like Carnegie's global peace initiatives - Gates' work in his home nation, on education, seem worse than Carnegie's mixed results. Perhaps that's because he isn't motivated by that fear of hell, perhaps it is because he is still motivated by egotism and greed. He believes - in Horatio Alger form - that he is not just an expert, but a morally good man, because he is very rich. Of course if his policies preserve his family's generational wealth advantage, that is all good too.


"The struggle for control of American education continues to evolve at a dizzying pace. I read that Bill Gates advised the Council of Chief State School Officers to eliminate seniority and tenure and recommended that schools stop spending to reduce class size and stop giving teachers extra money for master's degrees. He wants teachers to get paid based on "performance" (i.e., their test scores). I guess we are now seeing a full-court effort to impose the corporate model of school reform, and Gates is the leading spokesman.

"No, wait, I take that back, Secretary of Education Arne Duncan said something very similar in a speech a day or two earlier, where he seemed almost happy to say that the days of wine and roses are over and schools must learn to do more with less. They seem to be sharing scripts. I don't know who is the leading spokesman.

"I can imagine some of Secretary Duncan's predecessors, such as Secretary Shirley Hufstedler or Secretary Richard Riley or commissioners of education such as Frank Keppel or Harold Howe saying something very different. I can imagine them going to the public and urging them to support more resources where they are needed and more equitable funding. I can hear them saying that we need to thank our hard-working teachers, and we need a stronger profession. But Secretary Duncan likes to win plaudits from the people who love to cut education budgets. Go figure. The eerie similarity between Secretary Duncan and Bill Gates makes me wonder who is running the Department of Education.

"Funny, about the same time I read Gates' demand to eliminate tenure (that is, the right to due process), I got a letter from a young teacher, expressing his concern about what was happening in his district. When I asked if I could post his letter on my website, he asked me not to use his name because he is untenured. This is not unusual. I have received hundreds of letters from teachers who have asked for anonymity, because they fear reprisals. Some are tenured, some are untenured.

"Since Gates is a multibillionaire, he can't possibly understand what it means to work in an environment where you might be fired for disagreeing with your boss. Nor can he possibly understand that schools are collaborative cultures that need senior teachers who are ready and willing to help newcomers. He can't imagine that school is different from Microsoft or other big corporations. Let's be honest. CCSSO and The New York Times pay attention to what Gates says because he is so rich. If he didn't run the biggest foundation in the world, if he wasn't one of the richest men in the world, would anyone care about his opinion of education? Really, who would care what he said if he were the chairman of the Whatzit Corporation and sold widgets?"

(you may want to read all of "Ravitch answers Gates")

It is not to overstate Gates' personal wealth or what that wealth can buy to suggest that he has become the engine driving the current corporate-based "reform" effort in education on two continents. His money lies behind a constant stream of misinformation spread from Seattle to Westminster. His ability to speak to any newspaper, any network, even almost any school - an ability based solely on his wealth, not any inherent capabilities or knowledge - make him a powerful voice no matter how misinformed he might be.

Today, we still live with many of Carnegie's mistakes: Our kids take Biology before Chemistry and Chemistry before Physics because Carnegie pushed a Committee of Ten curriculum based on alphabetical order, not logic or an understanding of learning. Algebra is an essential course rather than Logic because Carnegie needed to beef up secondary math. We equate "seat time" with knowledge because of a Carnegie report. But at least we have the libraries.

What damaging nonsense is Gates inflicting on the next hundred years? We can only guess right now. But whatever it is, it will not be a community's mistakes, decided through research and democracy. Rather it will be the blatherings of one rich guy - a guy who is incredibly wealthy mostly because he bought someone else's work and passed it off as his own.

He's calling the shots on our future. If we let him.