In 2008 I wrote a post with a title similar to this about the construction of disability. Consider this "part two."

On Wednesday night I was at the Comparative and International Education Society Annual Conference at The Palmer House Hilton in Chicago. I was exhausted from a day of rolling a wheelchair over vast distances on very thick carpet. My leg hurt like a m..., well, it hurt in ways that pain meds weren't touching. And my arms, shoulders, and hands were burning from the "work out" of the day - which had begun with an 8.00 am presentation.

But I really did not want to hide in my room. The real reason anyone goes to a conference like this is to get to meet, and talk to, the brilliant, fascinating people who are there - people from everywhere on the planet. So I pushed through my room door, wheeled through the long corridors, rode down in the tiny elevator which barely fit my chair, and went down to the grand lobby where two big receptions for conference attendees were being held, one sponsored by my university, the other by Teachers College of Columbia University.

I rolled through the lobby and met a friend near the base of the stairway below, which led to one of the receptions: 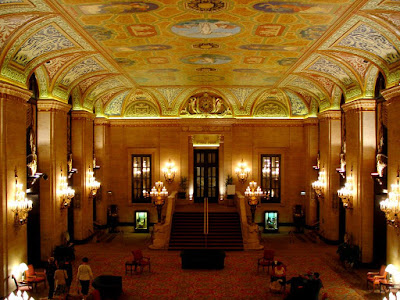 Entrance to the Empire Room at The Palmer House
"Are you going in..." my friend asked, voice trailing off as he turned to look. "Oh." "Yeah," I said. Now - I'm sure there is another route. I've ridden in my share of kitchen elevators, etc. But as I looked, realizing there was no indication of a disability route, no statement at all of accessibility, I decided I didn't want to be carried in through the back door to this event.

So I said goodbye to my friend and moved toward the Teachers College reception in the hotel's Honore Ballroom. There, I met another staircase only entrance, also without disability signage. Worse, Teachers College - one of the foremost and forward-thinking education schools in the nation, had placed their "check in" table on a landing in the middle of the stairs. Again - I'm certain that there is a way in - but why should I, unlike everyone else, have to beg for admission.

Blocked from the free food, and hungry, I turned into the hotel bar. But service was either unavailable to those unable to climb the six stairs to the bar itself, or I was invisible, because I sat at a table for 20 minutes, attempting to corral a wait staff member, quite unsuccessfully.

So I went back up to my room, crawled into bed, and spent a small fortune on room service. As I ate, I realized that the Thursday night dinner, the "big event" of the conference for which I had purchased a $65 ticket, was being held in the Empire Room - that first place with the big, beautiful stairs. I called downstairs, cancelled my stay Thursday night stay, and arranged to leave early Thursday afternoon.

Now, let me pause to say that I have no complaints about The Palmer House. In fact, I have never been treated so well in any hotel anywhere. Except for the bar staff, every employee was not just helpful and kind, but positively wonderful, and - and this matters - was clearly perfectly trained in disability etiquette, offering help without pity, treating me as fully human at every turn. The service was so good I thought I was on the Titanic - without the whole unfortunate iceberg thing. 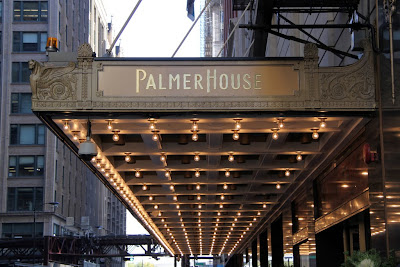 Monroe Street Entrance
And it is not the fault of The Palmer House that they are trying to fit modern function into a landmark 1871 hotel. I believe in aesthetics - I don't want them hacking through 130-year-old marble to install an elevator next to the Empire Room stairs. I could ask for better signage, sure, but historic facilities are historic facilities, and people choose their conference facilities either considering access, or not.

So, Michigan State University, as conference host, chose a facility without wifi (blocking many free accessible technologies), with poor 3G reception (blocking others), with long, deeply carpeted corridors that made mobility really difficult, with major reception rooms with stair-only main entrances, with many tiny meeting rooms which wheelchairs could barely - or simply not - fit into. This was not a "single oversight." Those checking people in to the conference sat behind a tall desk I could not see over. No conference signs referred to accessibility, either for mobility, or hearing, or vision.

There has been only a very few times in my "mobility-challenged" experience when I've been told more consistently, or more repeatedly, that I was not "fully human."

It is not malice. No one organizing this event set out to make anyone's life miserable. But that does not make it better. I can fight malice. Instead, my disability was constructed by educators I know through complete indifference, through complete lack of empathy. That is much harder to fight, If any of these people read this they will likely be horrified. They will be apologetic. They may be even resentful that (a) I didn't help with the organization, and (b) that I didn't ask them repeatedly for help, rather than launching this "public attack." They may, even, in regard to those latter two issues, be partially justified. I did not help. I did not ask.

But should I have to? Back in 1998, when I was at Grand Valley State University, I was explaining to the Academic Computing staff why we were going to put accessible computers in to every computing environment on all of our campuses, and why we were not requiring "disabled" students to show some kind of ID card to use these workstations. One of my co-workers there got it immediately. "We don't ask anyone else to go somewhere special to use a computer," he said, "we don't ask anyone to show an ID to use a monitor or a keyboard."

That was 12 years ago. I don't know if the term "Universal Design" had entered education yet - surely I had never heard of it - and yet, people knew what was right. Today the expectations should be much higher.

There were many fabulous things about this conference. Great people. Great sessions. Great ideas. Great conversations. I would say that I would love to go to CIES2011 in Montreal, but at this grand international event, my fellow educators, grad students, and researchers were willing build my disability into something so big I felt not just like a Second-Class Citizen, but as someone less than fully human. If they'll do that here, to me, what are they doing to the students in their classrooms?

I hope the person I gave my dinner ticket to enjoyed... I hope they had no problem with the stairs.