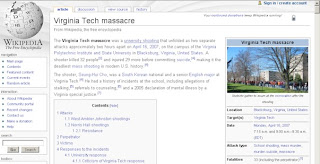 For all those in control in schools and universities who love to attack Wikipedia, allow me to present the article entitled Virginia Tech Massacre. The New York Times noted: "From the contributions of 2,074 editors, at last count, the site created a polished, detailed article on the massacre, with more than 140 separate footnotes, as well as sidebars that profiled the shooter, Seung-Hui Cho, and gave a timeline of the attacks."

What is dazzling about this creation of a volunteer army of researchers, is its continuously updated accuracy, the pureness of its presentation, and its complete documentation - all far different from anything available on the news sites of major media sources.

But what is incredible is how something like this comes into being, when all those academics who used to make vacation money from writing Britannica and World Book articles insist that the very process is impossible. “As the popular joke goes, ‘The problem with Wikipedia is that it only works in practice. In theory, it can never work.’ ” the Times quotes Miikka Ryokas, a 22-year-old computer science student from Turku, Finland whose Wikipedia user name is Kizor.

That is true because information theory and educational theory remain grounded in the concept of elites-managed-information. Be sure here, nothing on the Wikipedia VT page is original research, and much of it is pulled from elites-managed-sources (newspapers, TV networks), but Wikipedia proves that the chaos of the masses can often do a better job of parsing and re-distributing information than the elites can. "Chaos theory confirms," a university maths major told me last year, "that the more people who view, and thus edit, and article, the more accurate that article will become." And, in fact, when actual studies have been done on Wikipedia the general reliability has proven to be essentially as good as Britannica (despite Britannica's unsupported assertions that this is not true), and to have the most mistakes in the most obscure articles. Even then, "mistakes" cited by non-experts often turned out not to be mistakes according to experts in that particular field. And, obviously, Britannica does not have full resources on this event or other current events, and in print, does not yet even know about a European nation, The Republic of Crna Gora.

The key here for educators, though, is the power of community cognition. When diverse people collaborate, great things happen. Differing viewpoints do not add up to a chaotic result, they build to a balanced solution.

These days this kind of collaboration is easier and easier for educators who make the choice. Not just through the highest tech of Wikis or the lowest tech of conversation, but through email, Google docs, blogs, students can collaborate across cognitive levels, across experience levels, across grade levels, and between classrooms, schools, states, and nations. It can be a stunning learning process if students are allowed to play the process out.

Not technology... but a link to a different key issue for students who are different...

Just a few new Firefox Extensions and Add-Ons you might want in your classroom, or at home...

backword... is a nifty little software widget that lets a mouse hover translate a word, a great tool for English-language learners.

Converter... a right-click measurement conversion system. What's the temperature in New York in Celsius? How much does that sack of potatoes weigh in kilos? How far is it from DeGaulle Airport to the Sorbonne in miles?

Pronounce... instant pronunciation of English-language (US) words via double-clicking.