Teaching remains one of the most isolating professions I can think of, especially since lighthouse keepers have largely disappeared, and this isolation not only has profound effects on the individuals who teach, but on all of their students as well.

Even in large urban schools most teachers spend the day essentially locked within their own classrooms. Contact with their fellow professionals is limited to short lunch moments, conversations in the parking lot, and poorly designed professional development sessions. There is none of the "just-in-time" consultation which the other "professions" - doctors, lawyers, architects, engineers - have, almost none of the collaboration which routinely define those professions. There are not even "post-mortems" to challenge and advise when things go wrong.

Of course in much of the world the isolation is near total. Rural teachers may be one of two or three, or even the only teacher in a village. They may be hours from other teachers, and completely removed from any possible physical connection to teacher training institutions.

In addition to this lack of collaboration and internal support, these teachers also lack real visions of change, real alternate solutions. Teachers don't see examples of the best schools. They don't see what a real universal design school looks like. They don't see schools-without-walls. They don't see multiage or great mobile learning, unless it is right in their building.

Finally, teachers' "sight" and "reach" are constantly being restrained by national and local hegemonic power systems. Those who fund education, those who make "the rules," are politicians imposing their own vision of social reproduction on teachers. These rules - or the design of teacher education itself - constrict the sense of possibility in education. It might be the time schedule - what you can do with students in a 50 minute period is so different than what you can do in a flexible schedule. It might be how teachers are trained - in the US Teach for America workers have just six weeks of training, often devoid of alternative ideas or ideas for differing students, while in Northern Ireland, a single-year program, "just does not give us enough time [to really transform new teachers regarding inclusion]," a University of Ulster professor told us on Tuesday, and in many education programs Special Educational Needs are, at best, a tiny sidebar and Universal Design is not demonstrated at all. It might be barriers erected to learning - teachers given laptops which block certain content and certain social networking sites, or which prevent teachers from installing and discovering new learning technologies. It might be national laws - which prevent invention and experimentation. It might be locally instilled fear - many of us have seen or heard the "be scared of the internet" presentation given by poorly educated educators, politicians, and law enforcement personnel.

The result of this isolation is teachers who get stuck, who get frustrated, who are left alone to problem-solve without support - and students who too often sit through unimaginative, unchanging pedagogy. 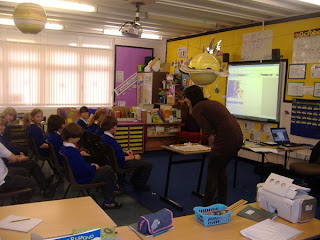 I combine concepts from two philosophers to explain what I think happens when social networking tools such as Twitter and blogs enter the lives of teachers. From Michel Foucault I bring the idea that we best observe human action by watching what they actually do in a conceptual transaction space. That "space" - the "playing field" on which we operate, is shaped  by the limitations we have constructed through our own cultural experiences. And from Antonio Gramsci I bring the slightly advanced Marxist Philosophy view of power - that all humans have power in some way - that there are ways in which people resist and attempt to subvert structures imposed from above (the colonial imposition of hegemony), and it is important to watch those flows of power to understand.

Teachers seem to begin using these tools tentatively. First blog posts are often a basic question, or a happy report on something in their classroom. First tweets are typically a "hello," followed by a period of lurking. Many teachers go no further. Many of those who go no further describe the experience as "boring" or "confusing."

But for those who stick with it, those who are active enough to allow themselves to be drawn into conversations, start to see their transaction spaces change. New ideas flow into them which begin to widen horizons - they meet a classroom team running an inclusive classroom, they meet a latin teacher working without paper, they meet an American special education teacher challenging convention - or an Australian one. they see classrooms unimaginable to them, they meet new professors with different ideas - and the walls which have surrounded their perceptions - and which have appeared to limit their possible actions - begin to fall.

They collaborate on pedagogy, often linking classrooms together - sharing book groups, blogs, skype calls - across their nations and around the globe. And they collaborate on power, asking for assistance in changing policies and structures, and getting it. These power collaborations range from technical advice on blocked internet applications to support for tenure.

And, once this happens, students begin to see the benefits, both indirect - teachers willing and able to attempt change, and direct, actual classroom involvement in the world.