A "universal" VoiceThread? Not quite. And, Google and Prezi

I love VoiceThread. I do think of it as a universal design tool - that is - students can comment with text, with voice, with video, by drawing. Those are good choices which bring many students in, but not quite all.

Because for all of its charms, VoiceThread has failed to work with any kind of screen reader, leaving those with sight issues, and reading issues, disconnected... from totally to partially.

Now VoiceThread has begun working to solve this. In a trial centered at Pennsylvania State University, VoiceThread is introducing VoiceThread Universal and is soliciting comment on this beta software. 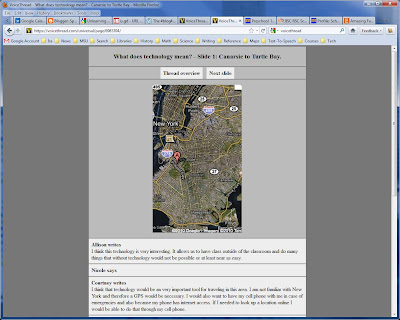 Here's my quick review. VoiceThread Universal lets full-scale screen readers, software like JAWS and ORCA, read the text comments left on a VoiceThread and allow navigation. The navigation allows you to add comments as well, and that's great. But as the developers point out, the current system won't help you with, "creating and adding content to VoiceThreads," won't allow searches, doesn't allow phone integration, though they say all these things are being "worked on." Which is good and bad. Bad because its not ready, but good because it is coming. A bigger issue for me is that neither VoiceThread nor VoiceThread Universal works with the kind of "light" screen readers used by those with dyslexia. The readers in Firefox (FoxVox, Speaking Fox) and Opera cannot read the text. The text cannot be copied to Microsoft Word and used with WordTalk, or copied to Balabolka, or higher end Text-To-Speech systems like WYNN.

That's a problem, and its a problem I'm hoping the developers at VoiceThread take seriously.

Yet, I want to thank those developers for trying. And I'll note that last week the National Federation for the Blind sued Northwestern University over ongoing accessibility issues in Google Apps. The details of the complaint are complex, but here's my Google Apps complaint.

Those same "light" screen readers, the ones which make browsers accessible? they don't work with Google Docs. Actually, they did with earlier html Google Docs, but the spring 2010 upgrade eliminated that functionality.

This causes deep conflicts for me. VoiceThread, Google Apps, and - to bring in another issue - Prezi, all contribute to universal design in significant ways. They help a wide range of students I work with. But all three, because accessibility has been an afterthought to their programmers, fail many students as well. I, for example, much prefer Prezi to PowerPoint, but I can make Microsoft's PowerPoint accessible with PowerTalk. There's nothing I can do to make Prezi accessible.

So, is it OK for us to use these tools in schools? I am conflicted. I tend to think "yes" assuming that we always - automatically - provide alternative access capability which is, essentially, equal. After all, we still use those inaccessible books in our rooms, we still let teachers write, in handwriting no less, on the "board." But I'm bothered by it because use may tend to remove the pressure on these organizations to move toward accessibility. These companies want access to our students, should we offer that if they don't really want access to all of our kids?