Let me begin simply, if you are actually "middle class" in America - if you have a decent salary, a decent place to live, vacation time, sick time, a break for lunch, you were either born to America's aristocracy or you owe all that to unions. 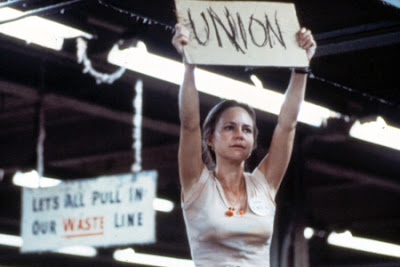 You may or may not belong to a union. Your union might have a strange name like, American Medical Association, or American Bar Association. You might be a freeloader, like U.S. employees of Toyota or Kia or Nissan who receive union type benefits because the company wants to keep the unions at bay. You might even consider yourself an "independent businessman" who pays dues to, and/or takes advantage of, the combined lobbying power and purchasing power of something like a "Chamber of Commerce." Whatever. You owe your advantages to unions. Unions created livable wages, vacation time, sick time, lunch breaks, minimum wages, working hour rules... yes, unions created the American middle class.

Why does this matter? Because the ability of citizens to organize themselves is essential to democracy. It is essential to human rights. The United States even said so when it ratified the United Nations Declaration of Human Rights. And that right is under attack in America today.

No, no state legislators are trying to break up Chambers of Commerce. None are insisting that Ace Hardware stores stop collective purchasing and advertising. And surely, I have yet to see the Republican governor push a bill to stop capitalists from joining together in an organization designed solely to limit their liabilities for debts and wrongdoing to customers and investors (we call this "a corporation"). But for people like you and me? The goal is no labor rights.

I have written a lot on the value of teachers, the need for tenure, the importance of unions, and, yes, even how I would change teacher training. But, there's a story I will add for EduSolidarity Tuesday 2011.

My mother was first hired as a teacher when I was seven-years-old. She had struggled to go back to school, with four kids in the house, to get one of the few good jobs open to women at the time. Among jobs in America, then as now, teaching was in the top level of required education/training. Plenty of nurses back then had two-year degrees. Most jobs had no educational requirements. Teaching required a four-year degree including apprenticeship time, and continuing education once on the job.

In exchange for that she was paid a little better than $3.00 an hour for time in school, around $4,500 a year, about 2/3 of the median full-time head-of-household worker pay at the time, just below average, and about 45% of what lawyers averaged. She was on duty outside the school before and after the school day, and most days had "lunch duty" and "playground duty" as well. There were no planning hours or professional development days. She would be up late into the night creating plans for the next day, or, three times a year, writing out report cards in her magnificent "third grade teacher" handwriting. I haven't thought about the combination of her fountain pen and the carbon paper she used for that task until just now... could you press hard enough with a fountain pen?

Of course, she found jobs every summer to get the family through those unpaid months. A lot like all the non-union teachers today (from Christian schools and for-profit charters in my area) who I see working in stores in the evening and on weekends to make ends meet. Yet every August she'd spend a fortune on materials for her classroom which the school did not supply.

Early in her career she joined the movement to organize her school district with the American Federation of Teachers. This was incredibly controversial. Why would teachers need a union? Especially an AFL-CIO union?

You already know the union did not bring miracles. If you are a teacher today your job only looks a little different, but in the hyper-inflation of the 1960s and 1970s, the union kept teachers near that "average" wage. It created real tenure and job rights. It allowed lunch time and planning time. It created professional development days. It broke up the fourteen hour days which came when parent conferences occurred. It gave teachers a voice in curriculum development, in district policy. In her district it led directly to highly successful educational innovations - open classroom elementary schools, aggressive desegregation policies, inventive high school solutions. More than anything, the union protected the cutting edge teachers - the ones who challenged the system on behalf of their students. I witnessed numerous situations in my secondary school experience where the best teachers in a building would have been fired as "troublemakers" were it not for the New Rochelle Federation of Teachers.

In other words, the union lifted my mother from an abused female worker into a middle class professional. It gave her decent working conditions, time to use the toilet, time to eat, a survivable salary, the ability to retire (eventually), and a voice.

Those politicians today, from Scott Walker to Rick Snyder, to Andrew Cuomo, to Chris Christie, to Rush Limbaugh, and John Boehner? Their goal is to rollback all of that progress. To a time when teachers were fired because they riled their superintendents. To when cops had to take "tips" to earn enough to live. To when jobs in government were given out in return for campaign contributions.

Today on EduSolidarity Tuesday we must stand as one. We must understand that globally, for the past 150 years, unions have been the guarantor of human rights, of labor rights, of professional rights - from Homestead, Pennsylvania to Gdansk, Poland. From Memphis, Tennessee to today in Wisconsin, Idaho, Ohio, and New Jersey.

Do not let a bunch of villains straight out of Dickens destroy America. Join and fight.

Great piece, Ira. I started teaching in 1974, and knew many women like your mom who became genuine professionals through the union, letting the men who worked at the high school (and had a conference period and duty-free lunch) know that what was good for the goose...

Thanks. A terrific read.

Admittedly, teacher unions deserve credit for improving the working conditions of millions of educators today, but its important to also note the fact that they protect the jobs of many ineffective teachers.

My name is Ashley Welch and I am in Dr. Strange's EDM 310 class. I have been assigned to read your blog as an assignment to post on our blog. This post on Unions was very informative, it really gave a clear understanding of what unions are...especially if you didn't even realize you were in one. That's really awesome that your mom was involved in the movement, American Federation of Teachers. Thanks to her and many other people, teachers can get professional rights.

Thanks for this, Ira. We need to tell more stories about how the teachers often use our union as a means for reform and innovation. The "reforms" teachers, and our unions, tend to resist are often bad ones.

Wonderfully said! Yes, let us all go back to the... was it thirties or twenties?... before unions, when it was perfectly legal and smiled-upon to work children and adults to the bone, pay them practically nothing, and then fire them when their bodies and minds gave out. What lovely days those were! I could spit.