Learning Video Games and The Cost of Failure

I often hear some variation of these two quotes coming from teachers and school administrators, and even parents:

"He can spend hours learning a video game, how come he can't do the same in school or with homework."

"He pays much more attention when he is interested in something."

Yes, these are "duh" quotes And these are part of a ridiculous, if typical, search for a way to demean children by pointing out that they are disappointing "you." But they are also symptomatic of why schools fail.

Why do kids learn video games so easily? Why do they persist in the task of learning the game far beyond anything they do in school? 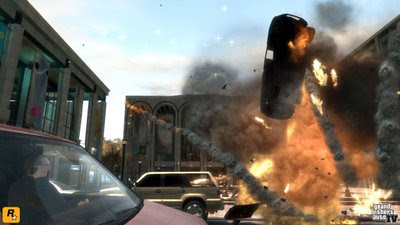 I'm not here (right now) to talk about video games in education, that's a different idea. Instead I am, like James Gee

, talking about what schools can learn from video game learning.

What do video games do?

The learning is self-directed. When a kid sits down in front of a video game he or she is in charge. They make the decisions in the game. They accept the consequences. They take breaks when they need to. They don't have to stop when a bell rings. They make themselves comfortable. They collaborate if they want and compete if they want.

There are no age-based grades in video games. It is fully accepted that a ten-year-old might be ahead of a 16-year-old on this game or that, and that the 16-year-old (or 30-year-old) can learn from the ten-year-old. In the world of video games all are teachers and all are learners.

There are multiple paths. Every good video game allows you choices, empowering the learner. The fastest route might not be the best route, or, at least, might be no better than others. You can choose different weapons, different strategies. How different than textbooks or the dreaded "middle school planner."

The learning begins with interest. Video games are (well, good ones) interesting. They are also varied. And learners choose what to play. They (for the most part) might be teaching the same things, but you enter through your interests - cars, spies, World War II, wild fantasy worlds. "He pays much more attention when he is interested in something." Duh. Don't we all? (Funny, I can do sports statistics and had no problems with architectural engineering courses, but totally struggle with academic maths and statistics - there are paths of interest, and there's the route to boredom.)

Video game learners collaborate and scaffold each other. "Let me show you." "Here's how you do this." There is an amazing amount of peer-tutoring in person and online. In school, of course, we usually call this "cheating."

Failure can be private. The video game does not call on you to publicly humiliate you. You can be public or private as you choose. Thus practice "costs" much less in social terms.

Failure has almost no cost. What's the worst thing that can happen? You die, either dramatically or in a cool explosion. The game doesn't send a note home or call your parents. The game doesn't yell at you or separate you from your friends. When the cost of failure is low, humans are willing to try again. Raise the cost, and people stop trying. Example, you try to climb a fence and fall, getting a scratch: You'll try again. You try to climb the fence and get a massive electrical shock: You won't try again. Simple psychology. If Edison had tried to develop the light bulb in school, he would have been labelled a failure after the first 50 filament failures, and we might still be lighting gaslights.

In other words, learning in video games is opposite - in almost every way - learning in the traditional school. So, if students are learning, and persistently working on learning, with their games but not in your school, you might want to spend some time considering why this is.

RIght on target is all I can say besides excellent. Thanks!

We should all spend some time wondering about why games are not being extensively utilized, esp. given post the Federation of American Scientists Summit report and other such research.

I LOVE this! What a great concrete example of what education should look like!

Good post Ira. You point out the key here is that its about what games allow learners to do, fail with little penalty(but some cost usually, which is also important I think so that there is an element of challenge).

This is why we need to be careful of those who just simply say we need to use games in schools. It's the philosophy and pedagogy of good games which is important. Take them into schools and hold students accountable for achieving certain learning outcomes through tests and you defeat the games.

This is also why so many serious games designed for education fail. They suck the fun out of play, usually becoming overtly linear,forcing students to do unnatural "checks for understanding" etc.

Its about letting people play with tools, environments and ideas, take risks, and have appropriate levels of challenge. This is what good teachers, and a few good schools create. A culture of meaningful play in my opinion.

Nice one. I'm currently doing research on MMORPGs Massive Multiplayer Online Role Playing Games and I'm seeing that used correctly, they can reach students. One game in particular, Quest Atlantis, was developed by educators for 9 to 12 year olds. It has the proper pedagogy and literacy embedded. It also is full of social commitments. Students move up in levels as they master certain content and there is no competition against each other and no guns. One study done with a 6th grade teacher had 2 classes use Quest Atlantis and 2 other classes using textbooks to teach and learn the same content. At the end of the year, the QA students showed greater understanding and achievement. More and more scholars at the university levels are engaging in the development of educational games and more and more teachers are using them. Changes in education with technology seem to be happening faster than some can keep up with, but there is no doubt in my mind that there is a place for it our classrooms.

Post is great! More and more Download Games are being created to practically help the students mentality. Letting them choose what they should make on time of decision making. There are lots to choose from. We can make learning in schools more exciting by introducing educational games. A good strategy is needed to combine both traditional ways and educational games.

This is the challenge that institutions like school is facing, how to make the student learning interesting so it would be easier for them to catch up and pick up what is being taught. There are educational Games, but I don't think its enough for children to learn, it should be incorporated with books.

Video Games have different impact on players. Each vary from the other. What they have in common? I think they are all interesting to play. They are made and structured to be like that. Interactions among students and educators should be improved, I believe, for a better connections between them. If students are indeed interested on one topic, learning is easy.

The common element I often see from playing a lot of video games is exactly what you said. The low penalty of "failure" in a game allows the player to become very adaptive and open to alternative measures. Us gamers learn early that there is always a reason for our failures and part of the fun comes from figuring out different ways, techniques, and strategies to ensure success or survival. These new feats in logic are then learned either intrapersonally (through personal learning and experimentation) or interpersonally (through 1 on 1 guidance or looking up a walkthrough online).

The cost of failure is far too high for students at school - right on, Ira. We rush to label students by arbitrary measures of success that are, at best, "minimum competencies" or, at worst, fallacious barriers to learning. We need students thinking like gamers (scientists) across disciplines and we need to train teachers to depersonalize students' struggles so all teachers look for effective, proactive interventions beyond "discipline." Imagine if we ditched grades and completelty removed from teachers any "responsibility" for deciding who's a failure. Imagine if we structured schools and systems to capture the fun challenge of finding solutions instead of blame.