Through Twitter I found this article from a student in Allendale, Pennsylvania. A high school student journalist with some fine writing skills.

Alex Groves, in The Morning Call, thinks, "As a social network, Twitter is a pointless dud."

Social networking in general is a wonderful thing when not abused or used in excess. Most social networking sites have the potential to connect people around the world and are almost always valuable tools in communication. That being said, there are always things in this world that are kind of pointless, and social networking has its own pointless duds, Twitter being one of them.

Twitter is just another fad based on popularity, similar to MySpace and Facebook. The only difference is it doesn't relay information quite as well as other social networking sites. But it still detaches us from reality and lets us become absorbed in what we are doing rather than what we should be doing or what we want to do. It's pointless and ultimately brings those of us who already have Facebook and MySpace to the point of excessiveness.

For those who haven't heard a lot about it, Twitter allows members to post blurbs or ''tweets'' about what they are doing in no more than 140 characters. These tweets are subscribed to by followers, often friends or fans of the person tweeting. The followers receive the tweets online or via external services such as cellphones.

Twitter has attracted the attention of celebrities like John Mayer, Soulja Boy Tell 'Em and Britney Spears. Politicians such as President Barack Obama and Sen. John McCain tweet as well.

The only problem with all this twittering by celebrities and politicians is that they are on Facebook much more often. Their Facebook walls are loaded with more information than their tweets. Anything they tweet about is usually also on their Facebook walls. So why spend time on both Twitter and Facebook?

By spending more time on social networks and the Internet than we need to, we enable ourselves to become reclusive, sheltered from family and friends.

How does one know if his friends are OK? We also miss the world around us. We don't get to enjoy a crisp, clean-smelling spring morning. We miss being involved in fun and recreational things. We miss the important things our family and friends do. We don't get to open an actual newspaper and enjoy it if we're constantly online. So, why have people become so fascinated with finding out what celebrities and politicians are doing rather than what they, themselves, could be doing? With all the good we can do online, including disseminating information and spreading knowledge, why do we become obsessed with Britney Spears tweeting about playing with the boys on tour?

When do we utilize technology for positive change? When do we use the Internet to our advantage, rather than as time-killing entertainment? Call me old fashioned, but I think that Twitter is unnecessary in a world already too obsessed with social networking.

Alex Groves is a sophomore at Emmaus High School, where he is a writer for the school newspaper, The Stinger. 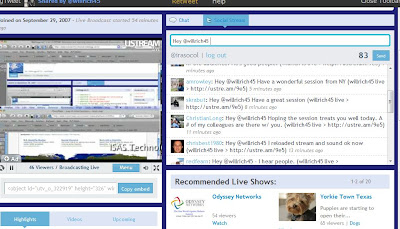 I read this, then I looked at my Twitter feed.

willrich45 Please say hello to IT Directors from across the SW. Why should we use social tools in schools?

shareski @willrich45 Because learning is social. If the only thing we use the internet for is to look up stuff, we're missing the best part.

haretek @irasocol Agreed, what makes twitter an effective learning tool is I get to use and practice skills in real time and real life w/real people

willrich45 Join us live in 15 mins here: http://bit.ly/163yCz Model the network for some IT directors across the SW.

And then I wrote Alex this reply:

As a PhD student and educational researcher, I can tell you that for me, Twitter is a continuous stream of incredibly valuable information. The people I choose to follow are not celebrities, but other researchers, professors, teachers, web developers, software developers, and global thinkers. All day long we exchange articles, resources, and ideas. We ask questions and cast doubts. We debate and challenge. And, through Twitter, we do this instantly, across continents and time zones, via a tiny window in the corner of our computer screens.

Is it all work? Of course not. Just as much conversation in my College of Education building is personal, so is much of Twitter, but that's because we are humans.

In the end, every communication system is only as valuable as the user makes it. Most of the books on the shelves at your local Barnes & Noble are "trash." Most phone conversations are nonsense. While there are great newspapers, most are worthless intellectually. Honestly, the majority of classroom time is useless. But all of these "tools" can be incredibly valuable if the producer and the user make them so.

With Twitter, you are producer and user, so the value lies almost entirely in your own capabilities. You make it what you want it to be.

I am not suggesting that anyone must use Twitter. It is always a choice. But I am suggesting that this kind of stripped-down instant social networking is, through the collaboration of a vast group of remarkable people, serving as a transformational tool in many ways. In my field it is changing classrooms, changing teachers, changing teacher preparation programs, and changing research paradigms.

In other words, we are indeed "utiliz[ing] technology for positive change." And we are using, "the Internet to our advantage." Our tool is Twitter, yours might be something else, but attacking the tool makes no sense.

book recommendation for Alex: Here Comes Everybody: The Power of Organizing Without Organizations

I agree with you, Ira. Twitter is the place I turn for my professional development. It is available to me anytime I am interested in teaching or learning. (Well, unless there's a fail whale waiting for me!)@ppalmer21