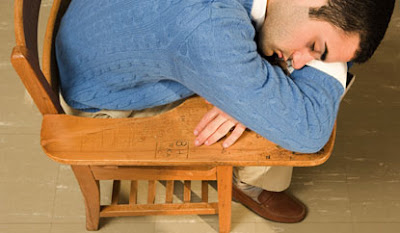 Arne Duncan thinks your kids should spend more time in school. Well, President Obama said it, but we all know this idea flows from his Secretary of Education and ex-Chicago Schools boss, Duncan.

Meanwhile, in Britain, teachers are asking to scrap the whole idea of homework in primary grades.

These two ideas really do need to be discussed together.

More time in American schools, longer days or more days, is probably a terrible idea. At least it is a terrible idea without completely changing American education, and American schools first. And I'm not saying this for the same reason the paranoid wackos at FoxNews are saying it. I'm saying it because, if we ever stop and think, we know that doing more of something which is not working is rarely a good way to accomplish something.

The school as we know it has to be re-designed. "School" as it usually is today, is a factory. It is a series of small lecture halls, with the day divided into discrete segments discussing unrelated information. It divides things in every way. By age, by random measurement of "intelligence," by wealth of family. It is a design that was doubtful at the start (around 1840 as we have 'learned' previously) and a design which is now as far out of touch with our contemporary world as an 1840s iron mill would be.

And if we re-design schools, then we can consider the school day.

Because, I do agree, our notion of the school day is ridiculous as well. We start in the early morning when surely every adolescent body clock desperately wants to be asleep. We take long summers off but miss the essential breaks people need throughout the year (most other nations do this better than the US, with holiday every six weeks or so and far more four day weeks). And we shutter our schools, which contain crucial community and family supports (libraries, gyms, health facilities, meeting rooms, theatres) most evenings.

So, if schools were redesigned to be open, non-age-graded, non-subject-divided, places, then the school day should lengthen as well. Schools should be open most of the hours of the day. They should feed kids when kids are hungry. They should offer library and gym access. They should give access to kids (and adults) to things like music, art, and sports in the evenings and nights. All of what we now call "homework" should happen in school so that homework is no longer a simple reflection of a student's socio-economic class (is a parent home to help with homework? does a child have time for homework? - or are real world concerns intruding? what's the parent's education? is there a safe, quiet environment to do academic work?). Students could do more things, catch up on things, move ahead on things, if the school day was longer.

But: does that mean the teacher's day should be longer? Hell No. We'd need more teachers, with more diverse interests. And we'd need teachers who might choose to work different hours as well.

Does it mean the student's day should actually be longer? Probably not. Instead, just as in universities, students would have more choices. They'd be able to schedule their day so it fit their needs (what a crazy idea!), take breaks as they needed, or, if school really were "that safe place," they could effectively hide there.

Of course my vision of a longer school day is very different from Arne Duncan's. That's because I want systemic change and he is a 'tinkerer.' He rose to fame in Chicago not because he did anything particularly dramatic or well (he did not), but simply because he is a better collaborator and communicator than Paul Vallas (so is Dick Cheney, but, ya know...). Essentially, nothing actually changed in Chicago schools while Duncan was in charge, they simply did things "less badly."

I am tired of "less badly," and I think President Obama should be as well. And it interesting, because the Chicago area (suburbs, not city) led the way earlier this decade in the investigation of "learning center" schools (halfway to what I am suggesting here). So if Duncan was interested in actual school change he had lots of evidence within a 25 minute or so drive from his office. And if Obama had really been "palling around with terrorists," he'd know this argument as well.

Anyway, longer school day? Sure Arne. Just change the schools first, and we'll all be there when we need to be.

Hey Ira
We have an internationa student living with my family. She is our third and all three are from Korea. They spend all day at school, plus Sat mornings. If their families can afford it, they go to 'academy' after school till sometimes as late as 11pm. They learn English at academy and may focus on various curriculum areas. On Saturdays she goes to academy in the morning.

Our student eats breakfast at home every day. She eats lunch and supper at school 5 days a week. She had never climbed a tree (till last week), or rode a bike after school or dug in the garden or played house all day Saturday.

She is academically inclined, with an high academic maturity and low emotional maturity. She does not know how to organise a play date or a sleep over. Everything for her is organised at home.

I have read about the high grad rates in Korea. Education is important and with the GDP based on technology and technological savvy relying on education....I see they why..i wonder if the collatoral damage outweighs the academic advantage?