Humiliation and the Modern Professor

In my fourth try at collecting an undergraduate degree I finally found real help. Struggling once again I signed up to be part of a multi-university national study of ADHD American college students. One of the first things they did was to have a "beeper-person" follow me to classes for a week, recording whether I was paying attention or not in 20 second intervals.

This was quite an amazing thing to live through. In one class the guy sitting next to me whispered, "Hey, that chick over there is staring at you." I told him what she was doing. "Wait," he said, "I've got it. Grab your crotch every 20 seconds. See what kind of report that gets you."

The next week they talked to me, showed me all these graphs, talked about when I took medication, and then said, "You really ought to take notes in class. It might help you stay engaged." "Notes," I said, "sure, why not." I had, literally, never taken a classroom note in my life, or at least not any which contained words. I had great notebooks from art classes and architecture classes, but that's a little different.

Still, I had seen plenty of people taking notes. I could do that. I went to the bookstore and bought a notebook and a pen. 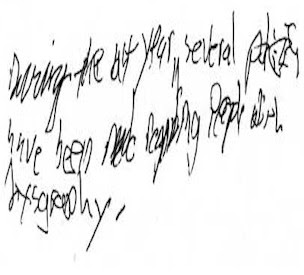 Another week goes by and they ask, "Did you take notes?" "I did," I told them. "What did you do with your notes?" they asked. "Do?" I said. "You said to take notes, so I took them." I passed the notebook over to the profs running this study. What they saw was what my writing looks like when I'm hurried, or stressed, or, ok, what it looks like anytime that I'm not copying text from something else. Letters randomly strewn on the page, often backwards or upside down, sometimes on top of one another, sometimes going left to right, and sometimes going right to left. "Can you read this?" they asked. "Hell no," I said.

There's a sequence that is developing here, and it is a side story but an important one. Most university support staff tell students with attention, reading, and writing issues that they'll, "Get them what they need." But most students with these issues have no idea of what they need. They either know nothing, or sometimes worse - they know only what secondary school specialists have told them, which, unfortunately, is often useless.

"Hold on," one of the profs said, and went out, coming back a few minutes later with another member of the Psychology department faculty. And now I met the woman I call "the best special education teacher I have ever had." And we spent much of the rest of the semester together. Later on she would say, "You know computers, and there are computer programs that read to blind people, I'll bet there's one that will read to you." Which led me to Arkenstone and WYNN and into a whole career. But first she said, "You work in Academic Computing, right?" I said that I did. I was a self-described "tech monkey" stringing network cable. "See if you can find an old laptop that you can use to take notes. Notes are useless unless you can read them."

Then she paused and said, "Find yourself a notetaking buddy in every class, and compare every week, because you have no idea of what notetaking means, do you?" I admitted that I didn't. It is not something often taught. One more way schools expect you to know something that they've never explained. 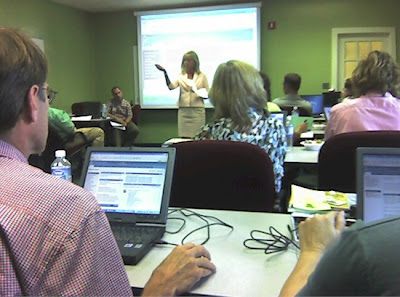 And thus I became the "first kid in the class" with a laptop computer. And this was a crazy thing. "Could you please sit in the back?" one professor asked, "I think that will distract the other students." Another was deeply bothered by the sound of my typing. Still another by the computer's fan. Others were threatened by the idea that I'd hand in written work via a floppy disk. This seemed to them to enable cheating. In every class I had to explain myself to the professor, to other students, to everyone. Two semesters into the experiment I stopped going to some of the classes because I hated the attitudes - not the best academic policy, but one does grow tired of walking around all day with a giant "DISABLED" sign stapled on. Still, I stuck it out. It took years but I got the damn degree.

When I went back to graduate school something wonderful had happened. I remember walking into my first class and realizing that everyone had a laptop. Every single student. Now, suddenly, I was just one member of the class. Yes, I was more likely to have ear buds close by, though I was surely not the only one. But if someone noticed that I had one bud in at various times (listening to text) I could now easily claim insolence ("I'm listening to iTunes") instead of disability - which is really a nice choice to have. 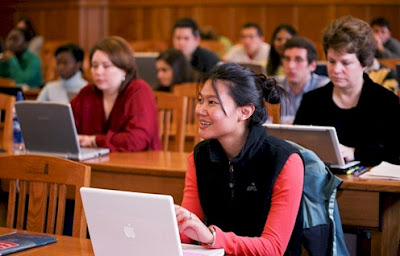 So, here's why I'm telling this story. There are lots of professors out there determined to go back to the old days. Lots of professors determined that those with disabilities or other differences will always be clearly labelled and separated. Oh, of course they will never say that. And they are really not evil people. I think that they are just clueless, and inflexible, and uninterested in the needs of diverse students. I think that they have other priorities more important to them than expanding opportunities. They will say otherwise, and they will usually "mean otherwise," though the impact does not change. They will say that they want to block out distractions. They will say students need better manners. They will say that "technology has no place" in their classrooms (defining "technology" as anything created since they were born). They will say, "You can do without this for this hour, it won't kill you."

I need not point out too many examples of this. You'll see these arguments every week on Inside Higher Ed and in the Chronicle of Higher Education, and in newspapers and magazines, and on faculty blogs. This morning I read one more at Dr. Margaret Soltan's University Diaries, and I decided that I had to say something clear in reply.

The issue here is that laptops in the classroom represent the first real chance at Universal Design for Learning - the first real chance to allow every student to choose the media format most appropriate for their own needs - the first real chance for students who are different to be accommodated without labels, and I'll be damned if I'm willing to give that up for the vanity of a few faculty who cannot figure out how to teach with the greatest information and communication tool humans have ever developed.

There are too many in education who long for those "old days." And perhaps we should have a few universities just for them - they can cut their own quills, make their own ink and paper, set their own type by hand. I don't care. I'll let them chop their own firewood if it makes them feel a bit more like medieval scholars. But it is vital to remember that those "old days" sucked for most students. American schools - by their own measures - fail two thirds of their students (that is, those students fail to become "proficient" where that is expected). The college drop out rate is extraordinarily high among even those who try it. And even those who succeed usually report disinterest and disengagement.

In other words, the world these educators want to return to is a world that was really only good for them, and people just like them. And I'm sorry, that doesn't sound like a good thing to want to preserve.

Hello Ira. It was nice reading this post. I can't help but admire you for your perseverance. True, there are still professors who are stuck in yesterday's world..they should know that being in that profession, they should be flexible to adjust to today's world. And not just because they are the educators, doesn't mean they don't have to learn something for themselves anymore.

Great post. As a teacher, I never minded laptops, just personal communication devices like cell phones and blackberries. And, if a student would just ~communicate to me~ their position, then the argument is over: I'm with them 100 percent.

On popular e-media examples of anti-technology professors, well, I think Solton at UD only really objects to the use of MS PowerPoint by lazy professors. Perhaps she did come down on students for laptop use, but it'd surprise me if she did it in an unqualified way.

Again, great post. Too many institutions and people forget that, sometimes, you also have to teach a student how to study, read, and write well.

I really did not want this read as a criticism of Dr. Soltan, who, of course, was just quoting a news story. But she does bring this issue up enough to imply an "impatience" with some of the technology.

An impatience is OK, but bans are not. Of course this gets tricky. Banning mobiles and smartphones seems an unfortunate way of targeting both early adopters (will any of us really be lugging full-size laptops four years from now?) and the poor, who, if limited to a single tech device, will obviously pick the $150 Blackberry over the $800 laptop.

So the trick to me, as I've said in many posts and in many places, is engaging these devices in class. I can really think of no class, no subject, where students could not be asked to use laptops or mobiles effectively and educationally, given just a bit of instructor thought. Because even paper becomes airplanes, spitballs, and passed notes if students have nothing else to do with it.
- Ira

I'm 15 years and I was diagnosed with dysgraphia when I was 6 years old. I'm an excellent writer and sometimes fustrated with my inability to show the teacher how well I write, as we have to write the "old fashoned way,using a pencil and paper. I often wish that I could use the computer in class, but like Ira said that would just lead me into a sea of humilation. I would be labeled the "weird" or the "specail" kid, and like every other 15 year old thats the last thing I want.
I'm writting this comment because I feel strongly that people with dysgraphia need a computer to truly live up to their potential. I hope that people will see this, and possibly become more educated on what kids have to live through on a day to day bascis, and hopefully not judge them for it.
-Vanessa

I'm into my 50s and never heard about dysgraphia until very recently. My handwriting is really horrible, and always has been. I don't think it's changed much since I was a kid. I have no issues with spelling or grammar, and actually write instructional content for a living. If it wasn't for word processing (and typewriters before that) I never would have been able to pursue my career.