That New York State now has a legally blind Governor offers an opportunity for a level of public education about accommodations that should not be missed.

Because when even people completely uninterested in disability are faced with a newspaper story such as "A Blind Governor Adjusts, and So Does Albany" from Monday's New York Times, we all need to jump in and share this with our students, with our colleagues, with our administrators. And we probably have to share it with explicit explanations of what's important - in order to ensure that it is not simply read as a "charity case." 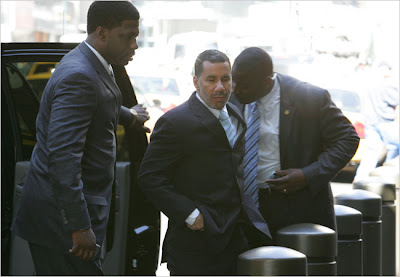 "Usually at night, in the Executive Mansion or at his family’s home in Harlem, the governor listens to the recordings on the designated phone line. They run up to five minutes each and can pile up quickly, taking hours to absorb.

“Last night I had 43 messages, all of them five minutes in length,” Mr. Paterson said in an interview. “That would be 215 minutes worth of material — over three hours.”

He stayed up that night from 11 p.m. to 1 a.m. listening to the recordings, which covered everything from his prepared remarks for a press conference on energy to articles on economic growth in The Economist. But that was only enough time to get through half of them."

First message - please stop wondering if you are offering people with a difference (in this case blindness or a print disability) some kind of "unfair advantage." The Governor of New York nightly exceeds the 'extra-time on tests' situation and still only gets half of it done.

Accommodations do not give an advantage, they don't even make things equal, they only make things possible.

Yesterday, I pointed out to some faculty members that I had learned to be much more efficient in reading then when I had begun graduate school. "There is no way to skim using text-readers," I explained, "and before you know what research articles are like you really end up 'reading' every word." That, the way I use text-readers, probably meant I was spending 4 to 6 times as many hours reading as many of my classmates. "But now, I know what to read, what to skip, what to go back to based on what I need." Now, I perhaps spend only 2 to 3 times as many hours reading as other students in the same place in the program.

They had never thought of that. So, it was important that I told them.

"Given the volume of material he must take in, he tries to find ways to do things faster. He listens to very long articles or books on a special tape recorder for the blind that plays at speeds so fast, it is difficult for others to comprehend. “You get used to listening to that Alvin and the Chipmunks voice,” he said."

Second Message - Technology enables independence but technology must be learned. AT Specialist (and blogger) Karen Janowski wrote to me recently, "I realized back in the 90's that so many of my students were engaged by technology and it supported and built upon their strengths. How come I was the only one who noticed this? The typical response (even today) is to assign a paraprofessional to students which encourages dependence and learned helplessness. Other students are so beaten down by their challenges and the obvious solutions include providing text-to-speech so that their reading struggles do not hold them back from accessing the curriculum. It seems that we want students to do poorly, we want to deny them opportunities to succeed, we want to withhold technologies that will promote success and independence. We want to continue to use methods that focus on remediation at the expense of accommodation for the deficit today. It is maddening. The solutions are there - we need to empower students."

Much has been made of the fact that David Patterson was lucky to have informed, wealthy, committed parents, who managed to get him out of the schools in the City of New York (which would not support him this way) to another school which would. And in that parental ability to force change may lie a big component of his success. Now, just as President George W. Bush was forgiven for all sorts of adolescent/young adult 'indiscretions' (and apparent student laziness) and was still able to attend an Ivy League university, and I believe that those 'redemptive' options should be open to all students. I believe that all students, even those without wealthy and politically powerful parents, have the right an education which supports them in their quest for independence.

"Since he cannot read from a prompter, the governor tries to commit his speeches to memory, by listening several times to an aide’s recording of the speech. Delivering an address just from memory can be nerve-racking. “It’s like a high wire,” he said. “You trip, there’s no net."'

Third Message - It will never be easy. The things 'you' take for granted will always be much harder for 'me,' and success will be much rarer among similar students. Consider this, could the current US President have been elected if he had no choice but to fully memorize all of his speeches? If he could not have quickly checked his notes during debates? Or this, could your school's principal or superintendent or your college's dean have gotten where they are if "two hours of homework reading" every night really meant six or eight hours every night?

"He also uses humor to poke fun at his disability, offering anecdotes about how he once showed up at a press conference wearing two different-colored shoes, or how as a young man he would occasionally miscount the number of subway stops on his way home and get off at 145th Street instead of 135th Street. “Back in the ’80s, you didn’t want to go there at night,” he said, laughing."

Fourth Message - Stop treating us as victims and start supplying services. We're people just like everyone else, stuck with certain issues which make some things difficult. We don't want your sympathy. We want you to be fair, to understand just a tiny bit, and to allow us to find and use the solutions we need. The Governor of New York does not suggest that he needed a person guiding him through the subway back in the 1980's, but he may be pointing out that today's trains, with understandable announcements of stops, would have made his life just a touch easier. Of course those clear announcements (along with visual maps that light up the upcoming stop) make subway travel easier for everyone (especially tourists). And, you know, no one needs to bring a note from their doctor to make use of those assistive technologies. Isn't that an amazing idea?

You wrote: "Accommodations do not give an advantage, they don't even make things equal, they only make things possible." ...Well said!

Your point about the desire for independence is well taken. And that can only be enabled by healthy support networks.

Assistance upkeep and maintenance for those with disabilities needs to be calculated like infrastructure costs by city, state, and federal government accountants. This kind of integration is the only solution.