"Mr. Hampton said his daughter Katie recently asked for a BlackBerry so she could better send e-mail to her friends and have unfettered access to the Internet. "'I said no," he recalled. "It's not necessary."

"But then again, Mr. Hampton said, he may change his mind. "No one is teaching kids how to use these things," he said. "But in fairness, adults don't know how to use them, either.'"

The Times's article: Text Generation Gap: U R 2 Old touches on all the repetitious arguments about mobile phone use and texting, from what I'll call the "stop speaking in pig latin" argument ("'But, Dad, we're texting each other," she replied with a harrumph. "I don't want you to hear what I’m saying."), to the "don't let them have a phone in their room" argument ("'I don't text that much in front of my parents because they read them," she said. And when her parents ask who is on the phone? "I just say, 'People.' They don't ask anymore.'"), to the "kid's ain't got no respect anymore" argument ("'I see kids text under the table at the restaurant," he said. "They don't teach them etiquette anymore." Some children, he said, watch videos in restaurants."), to that old basic, the "adults can see, but they can't seem to learn" argument ("Once, one of her sons didn't answer his cellphone when she called, so she sent him a text saying, "NICE OF YOU TO TURN ON YOUR PHONE." "They thought I was mad," she said. Ms. Gallick did not understand that using capital letters was the same as yelling. (She said she had the same problem when she began using e-mail, which, perhaps, makes her problem as much about adapting to digital shifts as it is about communicating with children.)").

Funny stuff, of course. Because if I watch A Christmas Story, for example, or Leave it to Beaver, I will see adults reading newspapers at the dinner or breakfast table. If I watch movies from the 60s or 70s I will see adults leaving the room to have private phone conversations. If I watch films from the 40s and 50s I'll see phones brought to the table in some very fancy restaurants (though The Oak Room at The Plaza has outlawed this practice in Hitchcock's North by Northwest). I can watch a thousand movies about the lack of respect by teenagers (funny to think that the cranky old folks making all the rules these days from school boards to Washington, DC are of either the generation represented in Rebel Without a Cause or that of Easy Rider). 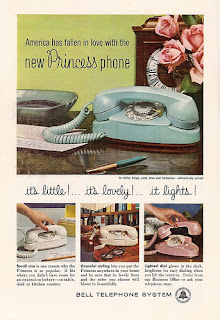 But it is really all about education, right? "No one is teaching kids how to use these things," parents are not, schools surely are not.

(the Princess Phone - introduced early 1960s) - from AT&T's Western Electric was the first model specifically marketed as a phone for a teenager's bedroom. It changed the way telephone conversations were conducted in US households. Previously the phone was most often in the entry hall, or in the kitchen, a communal place with little possible privacy. The bedroom extension altered teen phone use in dramatic ways)

And if you are not teaching it, you've abdicated your right to complain. So, put up, or shut up.