Ideas join together. On the same morning that I had an email conversation with a distinguished George Washington University professor regarding "cognitive authority" and the role of teachers, I read a New York Times article on the way younger people are interacting with political news. That article began:

"But on the medium it was made for, the Internet, the video caught fire. Quickly after it was posted on YouTube, it appeared on the video-sharing site’s most popular list and Google’s most blogged list. It has been viewed more than 1.3 million times, been linked by more than 500 blogs and distributed widely on social networking sites like Facebook." 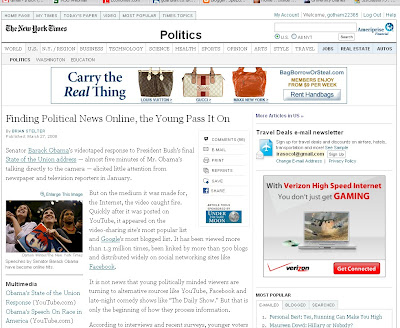 The article continued, significantly in my opinion, with this interesting revelation:

"In the days after Mr. Obama’s speech on race last week, for example, links to the transcript and the video were the most popular items posted on Facebook. On The New York Times’s Web site, the transcript of the speech ranked consistently higher on the most e-mailed list than the articles written about the speech." [italics added]

Hooray! I thought. But also, it is no wonder why the traditional purveyors of information, be they newspapers or university professors, are terrified.

Dr. Margaret Soltan 1, the professor I'd been communicating with, had challenged my notion that faculty existed to serve student learning by meeting students 'where they are.' "Universities don't exist to sit around figuring out where students are at and then tailoring what they do to the students," she told me. "Universities are autonomous institutions whose glory and distinctiveness - especially in the context of a pandering capitalist marketplace - is that they've evolved their own sense of what's valuable to know, and how it's most valuable to learn what's valuable to know."

Just as The New York Times knows (and controls) what "All The News That's Fit to Print" is.

But those who have grown up with the new technologies of information and communication have very different ideas. Despite all of the education establishment actively refusing to assist them, these students of today (and tomorrow) are learning how to analyze and spread information through community cognition. They are learning how to discern, how to separate, how to rank, and how to consider the context. Yes, I will admit, they are doing it badly, clumsily, unevenly, but they are doing it all the same.

"the transcript of the speech ranked consistently higher on the most e-mailed list than the articles written about the speech" Remember this. People have learned that they would rather work from the source material than to accept the analyzed condensation of even "the best" journalists on the planet. Academics should be jumping for joy! Really. So should journalists. Because, imagine, now they have an educated audience that they might be able to communicate with as 'informed equals.' How much more sophisticated a column might one write about Obama's speech if the assumption was that all had listened to, or read the transcript of, the entire presentation? How much better - to compare to education - is a conversation with students on Shakespeare if they have actually seen Twelfth Night rather than only knowing about it through the ending of Shakespeare in Love?2

But neither educators nor journalists are jumping for joy. They are threatened. They believe that their jobs, their status in society, their entire personas are in jeopardy. I think that isn't even close to true, but I do think that the way both journalists and educators perform their jobs will change - must change - in important ways. And I do understand that change can feel very threatening.

I thought of a course I took a couple of summers back - a seminar in international civic education for both masters and doctoral students. In one class we veered wildly (and fascinatingly) off-topic into a debate on governmental systems. I, and some other students with experience in proportional representation systems and coalition governments, made the case that those systems were both more representative and more efficient than those governments built on a limited number of political parties and first-past-the-post elections. The professor, someone with vast international experience (and one of my favorites) argued back. He brought up the French Fourth Republic and post-WWII Italy as classic examples of coalition governments which could not make tough decisions. "Look at Vietnam and Algeria," he said, pointing to France, in what I would call a classic case of editing for a point.

Within moments emails began flying among "our side" of this debate. Links followed links followed links, and within 20 minutes we had timelines, and I could say not only that the US seemed no more competent with Vietnam than the French Fourth Republic (an obvious fact) but I could list the vast accomplishments of that much maligned government - from rebuilding a health insurance and delivery system, to rebuilding an education system, to creating a vast (and free) higher education structure, to (most importantly) forging the start of European unity. "Interesting," I noted, that "British socialists locked into first-past-the-post campaigns were the nation which could not make the essential compromises involved in creating the beginnings of the European Economic Community (the European Coal and Steel Community)." The French Fourth Republic, I could argue, had accomplished far more in the postwar years, in terms of fundamental changes domestically and internationally, than either the US or the UK, with their "inherently stable" political systems, could manage.

But that's not the reason to tell the story: The reason to tell this is to explain that the professor in question both accepted our learning technique and encouraged it. He did not suggest that students typing on their laptops were not connected to the class. He did not assume that back-channel student communication was a sign of disrespect. Instead, he asked us to send what we'd found to everyone. And in the end he made a remarkable admission, "I'm not sure," he said, "that you've changed my mind, but you have made me re-think my assumptions."

That's great teaching. Even more significant, this occurred in a course half occupied with high school social studies teachers seeking their masters degrees, meaning it offered a counter-model to the kind of pedagogy most often used in schools.

Imagine then, if we all taught our students how to do this. Imagine if - instead of either banning laptops and mobiles from the classroom or ignoring them - we embraced these technologies and the information and communication strategies they enable. Imagine what sophisticated learners we might allow to develop if we actively taught how to gather, analyze, and share information quickly and effectively. Imagine how much more we would all learn if we accepted that everyone in the room has something to contribute to a "sense of what's valuable to know, and how it's most valuable to learn what's valuable to know."

Roger Cohen, an International Herald-Tribune columnist also published in The Times, raised - in the same issue with which I began this conversation - an interesting issue re: Senator Clinton's lies about her Bosnia trip: "Here’s some news for Hillary Clinton: the Bosnian war was over in 1996," he begins, a fact overlooked by almost every news source covering this "controversy," but a fact easily determinable by simply consulting Wikipedia ("The War in Bosnia and Herzegovina, commonly known as the Bosnian War, was an international armed conflict that took place between March 1992 and November 1995."). In other words, the 'reliable' sources have edited out crucial facts to understanding that are freely available through communally cognitive efforts. We need not even discuss how YouTube managed to spread the story by providing the full video of Mrs. Clinton's arrival.

How to transfer knowledge in society is a critical question, as is, who has the power to disseminate that knowledge. I fully realize that embracing learner-directed learning is a messier thing. But I do not think that the 200-year experiment in "industrial education" ruled by a knowledge elite has proved so successful that we need not question it, or try other things.

And even if we did think that, I'll suggest that - as The Times article demonstrates - "the horse is out of the barn." We can either help our students use their new forms of learning and communication and make it as good as it can be, or we can - as educators - keep fighting reality and make ourselves increasingly irrelevant.

Related Posts: Social Networking and Education. Learning vs. School. Too Much Technology. The Medium is NOT the Message. Mobiles in the Classroom. and from Dr. Soltan's Inside Higher Ed blog - Laptop Bans and You Know the Type.

1 Dr. Soltan's blog is also available through Inside Higher Ed, at University Diaries.
2 I say this loving Shakespeare in Love and knowing that watching the film would actually increase the understanding of Twelfth Night, but I'd still like students to have seen the whole play.

Tech article of the week: Researchers Play Tune Recorded Before Edison. "Scott is in many ways an unlikely hero of recorded sound. Born in Paris in 1817, he was a man of letters, not a scientist, who worked in the printing trade and as a librarian. He published a book on the history of shorthand, and evidently viewed sound recording as an extension of stenography. In a self-published memoir in 1878, he railed against Edison for "appropriating" his methods and misconstruing the purpose of recording technology. The goal, Scott argued, was not sound reproduction, but "writing speech, which is what the word phonograph means."' Talk about privileging one medium over another! There may be interesting parallels to explore here...

I hope you can join our community "Support People with Disabilities" on Change.org.

I also think you should act on helping HR 4137 and S 1642 (Higher Education Act reauthorization) get through conference committee with the provisions for people with disabilities intact: