CSUN 2008/Listening to Themselves 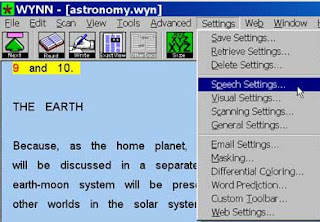 Text-to-Speech computer technology, both purchased software systems and free, ubiquitous systems, can dramatically change the process of editing, and writing itself, for students who struggle with reading.

And this is not just for the dyslexics in your classroom. The ability to accurately read back what you have written is a difficult skill. Even the best readers often "see what they expected to write" rather than what is actually there. And there is no doubt that this is an equity issue as well - students who go home to parents who can support the editing of their writing have a significant advantage over those whose parents are poor readers, speakers of languages other than English, or simply untrained in writing.

But, using software created for other reasons, you can give your students, from the youngest writers through university and beyond, a simple system which accurately reads their writing back to them, and we have seen the dramatic differences this makes.

In 2004 Englert, Manalo, and Zhao described three vital ways in which computer technology may assist student writing: “Technology,” they noted, “can highlight the properties and features of a particular text structure, making it more directly available for inspection.” It can, “support communication by stretching the coordination of challenging writing processes and structures among the participants.” Technology also, “can present prompts and scaffolds that serve as thinking or mediating devices.”

Crucial to success in writing, however, are two other “cognitive supports and scaffolds” that technology can provide. One is strengthening the link between oral language and the code system written language uses – in order to write without extraordinary effort students must either develop a mastery of sight word recognition and an automaticity in spelling, or they must have effective technological solutions to the lack of that mastery. The other is the an ability to read their own writing in a way which allows the student to “hear” his/her own voice, to test how his/her words will be understood, and to edit their own writing in order to construct effective communication.

The use of Text-to-Speech software, including numerous free applications, is likely to improve the oral/written link. Because words are highlighted as they are read aloud by these computer programs sight-word recognition builds, and it becomes easier for students to absorb new vocabulary when they no longer have to struggle to establish a pronunciation that 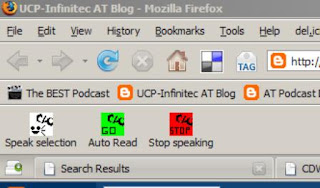 they can remember. Speech Recognition software, can increase those connections by directly demonstrating to the student the connection between their own spoken language and spelling conventions. As their own words appear before them, spelling becomes less of a mystery to those who struggle with the codes.

Most importantly, however, may be the ability of software to allow students with learning disabilities to “hear their own words.” Students who struggle with reading – with the decoding of written language – almost always struggle with writing. Not only do these two skills reinforce each other, but without the ability to easily read one’s own writing, the critical editing process becomes impossible. We could wait for reading to improve before focusing on writing, but we know that leaves students not just mute and frustrated, but far behind in critical functional and thinking skills.

When we experimented with this, with fourth year primary students diagnosed with dyslexia – a “less than first year” reading level – and dysgraphia, and, according to the teacher, had “no success in writing before this.” Specifically, in previous writing attempts the student would type in words, often badly misspelled and unconnected, and could do no further editing.

We looked at two interventions, one using Freedom Scientific's WYNN - the student typing his/her story using both audible word prediction and spell check, and then listened to her own writing through text-to-speech. The second used free solutions - a combination of Google Docs running in Firefox with the CLiCk-Speak add-on and using Google Docs spellcheck.

There were differences. WYNN's word prediction seemed to offer more vocabulary confidence than we saw without it. Students appeared more willing to try less familiar (more complex) words. And the more sophisticated voices in WYNN were preferred by some students. But both interventions showed significant changes.

It is not simply that grammar seemed to improve, but so did readability, clarity, rhythm and description. Missing words were discovered and repairs made. Repetitive word use (and pronoun use) decreased. Phrasing became far more sophisticated. And content changed as well, description being added and clarified. One student re-listened to her first version four times, eventually declaring, “That’s not what stories sound like.” Most importantly - the students did the work independently. It was their writing, crafted on their own!

We considered all the ways to accomplish this. We think that a "one-program" solution (such as WYNN or using the Google Docs - Firefox - CLiCk-Speak combination which becomes seamless to the student) is easiest to train, but even those aren't the only option. Another free way to go would be the new (and free) IBM Lotus Symphony word processor joined to the free version of NaturalReader. These software packages can be run on any computer dating back to the Pentium III and Windows2000 days, though, obviously any text-to-speech package benefits from increased RAM memory and processor speed.

The ability of struggling readers to “hear” their own voice will improve writing. It should assist in training formalized ways of thinking. It might increase engagement and an understanding of the reasons for learning reading and writing. It can be done at virtually no cost. Surely, it is worth a try.

Thanks for your CSUN reports! On the subject of free text-to-speech, I think you need to check out WordTalk, a free add-on for the PC version of MS Word. It works on all versions of Word, starting with Word 97 and including Word 2007. This is distributed by the Call Centre in Scotland, and it's a free download. (http://www.wordtalk.org.uk/) I uploaded a PowerPoint presentation about WordTalk as a slidecast (with audio) to Slideshare (http://www.slideshare.net/paulhami/word-talk)
I need to revise this because the installation doesn't need to be as complicated as I thought. At any rate, this is free text-to-speech that is very effective. Quite a number of schools on Vancouver Island now have WordTalk installed on servers so that it is available to all students. --Paul

Great links Paul. Thanks. The ability to turn text into mp3s is truly valuable, since it adds significantly to portability.

Also check out Co:Writer by Don Johnston's company. Rumor has it that there are new features and a lower pricing structure coming out for this program in 2009.

Many institutions limit access to their online information. Making this information available will be an asset to all.