"Of course, the big question isn't whether teachers like spending their time learning one new gizmo after another, but whether a parade of new technologies will help kids learn. From what I can see, that's not the case. Says one math teacher: "Math grows out of the end of a pencil. You don't want the quick answer; you want students to be able to develop the answer, to discover the why of it. The administration seems to think that computers will make math easy, but it has to be a painful, step-by-step process."

"A social studies teacher agrees. More than ever, he says, "our students want to push a button or click a mouse for a quick A, B or C answer. Fewer and fewer of them want to think anymore because good thinking takes time."'

A Washington Post column by a Virginia high school teacher named Patrick Welsh included the quote above. I found it when a friend sent me a link to an ed blog discussing the story. 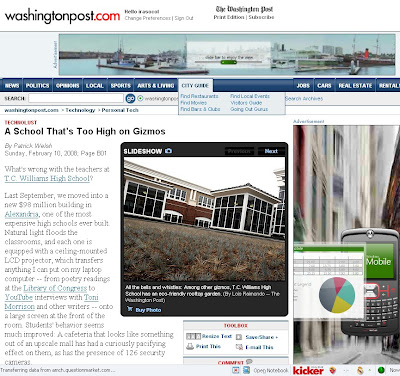 Mr. Welsh complains that his school district built a high school which is focused on technology instead of pedagogy. He says the building suffers from, "Technolust [in] its advanced stages... administrators have made such a fetish of technology that some of my colleagues are referring to us as "Gizmo High." Complaints are listed, with fine anecdotes, about being forced to use Interactive White Boards instead of overhead projectors, about "paperless" classrooms and assignments, and the multiple horrors of distracted students.

Believe me, I can sympathize with these teachers - I really can. They are poorly trained and poorly supported, and they work for a school district which clearly 'bought first and thought later.' As I've said many times, no one on the planet pays more for less effective technologies than the typical American school. But the notions behind Mr. Welsh's column are so completely wrong that I have to say something.

Let's pull apart the quote above - We'll start with the math teacher. "Math," he says, "grows out of the end of a pencil. You don't want the quick answer; you want students to be able to develop the answer, to discover the why of it. The administration seems to think that computers will make math easy, but it has to be a painful, step-by-step process."

Take it one step at a time. "Math," he says, "is dependent on a combination of 19th Century technologies that I have used all of my life." Right, he didn't say those words - but that is what he said. The pencil, machine made wood-pulp paper, the chalkboard - these are all 19th Century technologies. Does the teacher argue that no maths were ever taught before the invention of these tools? Or does he believe that these are natural things - perhaps part of the second seven days of creation? Like most in education he confuses his way of doing things with learning. Could math be done with a finger in the dirt? By counting on one's fingers? Or by writing on an IWB? Or a tablet computer? Or by inputting the right numbers into the calculator on one's mobile phone? It's a legitimate question.

Then he says, "You don't want the quick answer; you want students to be able to develop the answer, to discover the why of it." All of which I wholeheartedly agree with - and I hope this educator never suggests that, say, a shorter proof is better, or gives timed quizzes, and I sure hope that he battles with all his heart against short answer tests and lesson plans which do not allow each student to move forward at his or her own pace.

And finally he notes, "The administration seems to think that computers will make math easy, but it has to be a painful, step-by-step process." This argument is tough to figure out. Does a computer necessarily make 'discovering the why' of math easier? harder? I know that the kind of statistical simulations which I've seen on-line have made certain concepts like curves, coin flips, central tendencies easier for me to grasp. And I know that these have helped especially well when I could sit in a class and play with these simulators on my own laptop until I was satisfied that I understood - and it might have helped the rest of the class that I didn't ask 100 barely relevant questions because I could work on my own. So, my answer is "yes." Computers can help make 'discovering the why' in maths easier. They can also make it easier for myself and others by providing really effective math notation and calculation support through free software like Graph-Calc - software that allows me to put my energy into understanding rather than sweating getting the digits lined up correctly. Thus, my answer is still "yes."

As to whether maths must be "painful," well, I have no idea. I know that I have seen maths explored with great joy and excitement when taught well and taught relevantly. I know that while I failed many maths courses I breezed through the mathematical complexities of architectural engineering courses because I was interested, engaged, and fascinated by the way these otherwise arcane formulas related to things of interest. So maybe maths need not be "painful" after all - that's not a technology question anyway, just a pedagogical one.

And now the social studies teacher, "'Our students want to push a button or click a mouse for a quick A, B or C answer," she says, "Fewer and fewer of them want to think anymore because good thinking takes time."' And I ask - this relates to computers how? I've walked through many book and pencil secondary social studies classrooms, and the people I find most devoted to the short answer are teachers and educational administrators who love multiple choice tests and sneer at what we'd call "authentic assessments." But let's be clear here - no teaching group should be more thrilled to have a computer in every students' hand than one working in social studies. Students can read and compare a world's worth of newspapers or radio stations. They can zoom in on any place on earth through Google Maps or Google Earth. They can dig up any historical document. They can collaborate globally with other students through Google Docs, Skype, Instant Messaging. They can hunt for every statistic, every world fact. It seems to me that there has never been a technology better suited to deeper understandings of the world than the internet.

The problem is - again - that these educators have "naturalized" the technology they were born with and have not been educated in a way that prepares them to adapt to new realities. I commented on the Teacher Magazine blog that referred me to the article, "Weren't the old classrooms filled with technologies? From chalkboards to desks and chairs, from lighting to flooring, from room shape to acoustics, from books to paper and pens - hmmm, does [the article author] feel these are "natural" things?"

Of course he does. And though he has learned to teach with lights and pens, books and papers, walls and desks, he just throws up his hands with computers - stops teaching - and blames the technology. "I see the same thing in my classes, especially when it comes to writing essays," Mr. Welsh says, "Many students send their papers in over the Internet, and while the margins are correct and the fonts attractive, the writing is worse than ever. It's as if the rule is: Write one draft, run spell check, hit "send" and pray."

Gee, what could a teacher possibly do to solve this? Possibly, he could focus less on margins and more on writing, less on spelling and more on finding authentic audiences (via blogs? via shared Google Docs?) that would force the students to write with more care.

Listen, the idea of dumping a super-tech school on untrained teachers is unfair - but refusing to teach with the information and communication technology of the age our students will graduate into is simply professionally irresponsible. I'll take Mr. Welsh's criticisms of his school district's tech purchasing and tech support schemes as legitimate, But I'll also suggest that he (and his fellow teachers) stop complaining, stop blaming technologies, and learn to teach in the 21st Century.

Thank you so much for your comments on this oped piece. I am one of two Technology Integration Specialists at TC Williams High School. I want to correct the assumption that we do not provide quality support for teachers that want to use technology in their classroom. We provide large group, small group, and one-to-one professional development. We offer co-teaching as well as model teaching. We help teachers navigate new tools and reflect on how these tools may impact student learning. We want to ensure that the technology enhances, not replaces, classroom instruction.

There are many teachers at TC (including Mr. Welsh) whom I see using the tools, which we are lucky to have, in ways that deepen student understanding. I would have loved to see at least some of these examples presented in the article.

To dismiss the integration of technology in Alexandria City Public Schools as being for superficial reasons only is unfair and inaccurate. These teachers understand the goal: to prepare students for today's world, in which technology plays a key role, by using all methods at our disposal. If the process and communication by which this goal is pursued have been less than perfect, we should work together to improve the approach, not discard the goal.

I invite anyone to contact me for more information about our program or to schedule a visit and see how technology is being integrated in Alexandria. kyle.dunbar@acps.k12.va.us

I tried to email you but (technology trouble! too much security!) TC Williams email server will not accept mail from a "dot edu" address. But I am sorry if I seemed to be challenging your efforts - I suppose I was accepting Mr. Welsh's criticisms in terms of process - and I should have asked more questions first.

Your comment suggests even more strongly that the myriad complaints made in the original Washington Post column were ridiculous.