Spellcheckers have this inherent limitation. You usually have to be very, very close in order to get corrected spelling.

Now, I say this knowing absolutely that the spellchecker is perhaps the number one bit of "assistive technology" used in the world today - by "disabled" and "non-disabled" alike - unless we count things like automobiles and elevators, eyeglasses and stepstools, you understand, the things which can be used by students and workers without special permissions and special labels. Used the way teachers, for example, are allowed to use spellcheckers but students typically are not.

But those limitations - unfortunately standard spellchecking technology still requires a high degree of ability in what is called "phonics" - that bizarre science of trying to match up completely inconsistent spellings with the completely inconsistent sounds (in languages like English and Irish) they represent ("come home"). If you can't manipulate these code systems well enough to trigger the right guesses from the spellcheck algorithms, all you end up with is frustration.

Now along comes Ghotit.com - the creation of an Israeli dyslexia activist (and now "inventor") named Ofer Chermesh. Ghotit - a play on the classic phonetic spelling of "fish" ("ghoti") [1] - is a web-based, context-centered, definitions included, spellcheck system aimed at dyslexics and English-language-learners. 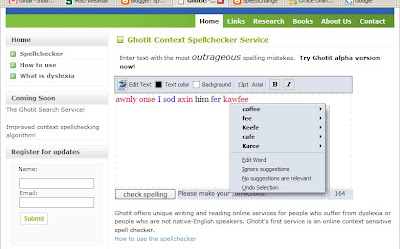 Ghotit's "Alpha" trial - now online - suggests that you enter text with the most outrageous spelling mistakes. I'm not sure I tried the most outrageous. Instead I selected a sentence made up of a few student-mispelled words from this past year. I typed the following "sentence" into Ghotit, three different Google applications, and Microsoft Word.

in Google (G-mail and Blogspot) no correct corrections were offered - though in Google Docs I did get "only" and "once."

In Microsoft Word I only was offered correct choices for "onse" and "fer."

Yes, the difference with Ghotit is dramatic. The correct spellings are there. Even better, they are there and supported by definitions so it is easier to pick between "once" and "nose" when you click on "onse." 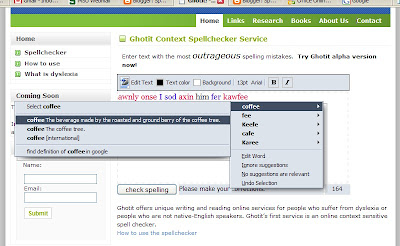 The folks at Ghotit would really like you to test the system out - and to test it out with real students - and to send them feedback. It's a great start, and it will get better the more you help. So bring your students to Ghotit today - and pronounce it "fished" [2] if you want.

English spelling is not easy and is full of many spelling irregularities. The word GHOTI is a constructed example word used to illustrate these irregularities, since the official pronunciation of the word is counter-intuitive and is pronounced like the word “fish”.

Ghotit was founded by people that suffer from dyslexia. Ghotit’s mission is to improve the overall quality of life of a dyslectic. Ghotit is not a treatment for dyslexia. It's a set of services that assists dyslectics to overcome their writing and reading difficulties by helping the dyslectic to convert his poorly spelled written limitations to mainstream English.

Dyslexics are heavy users of spell checkers. However, standard spell and grammar checkers address the needs of the general population, who demonstrates average spelling and whose spelling mistakes are typing errors resulting in a spelling that shows high resemblance to the requested word. These spell checkers produce low results for users who demonstrate poor English spelling such as dyslectics, due to:

Focusing on the problems listed above, the Ghotit team has developed unique spellchecking and spellcorrecting algorithms which are at the core of the services Ghotit is developing for the dyslexic community.

[1] Ghoti is a constructed example used to illustrate irregularities in English spelling. It is a respelling of the word fish, and like it is pronounced /ˈfɪʃ/. It has,

Who knows where to download XRumer 5.0 Palladium?
Help, please. All recommend this program to effectively advertise on the Internet, this is the best program!

Thanks to the Ghotit,they help the dyslexic people. They had to find way to be easier.