Reading (or Schools) vs. Learning

Samara Yudof is part of the problem. OK, not really. Samara Yudof is just a flack for the Bush regime's education department. But her quote in Wednesday's New York Times illustrates the basic disconnect between educational policy makers - including all of those who supported the No Child Left Behind legislation in the US (Senator Clinton, this includes you and Senator McCain) - and the reality of how humans learn.
Here's the quote, Yudof's boilerplate response to a report bemoaning the narrowing of the US curriculum under Bush, “You can be supportive of N.C.L.B. and also support strengthening the teaching of history and literature,” a spokeswoman for the Education Department, Samara Yudof, said. “It’s good to talk about expanding the curriculum, but if you can’t read, you can’t read anything at all.”

The right thing to say is this, "Without expanding the curriculum to bring in things of real value to students (and their society) there is no reason to learn to read or to practise maths. Reading can take many forms - only one of which involves the decoding and phonological strategies which fill the American school day, but the reason to read, and the reason to want to read, can take only one form - proving to students that accessing stories and information will be valuable to them. Likewise there are many ways to perform mathematics, but students will only learn those if they have proof that these skills will improve their lives in some way." 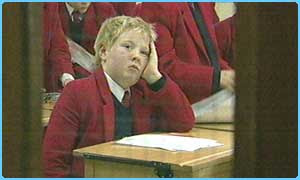 American schools have been degraded since 2001, turned into meaningless skill factories with no pay off for students or societies. They were bad enough at the end of the last century, but now, it is probably absolutely true - the less time your child spends in school, the better he or she will be. School has managed to completely disconnect the 'science' of reading (that decoding phenomenon) from the 'arts' of content acquisition, inquiry, and entertainment. And, in this century, the only essential things are those arts. Any number of free, downloadable, software packages will solve the decoding for you. In other words, it is as if we were teaching 'hammering' while forgetting to point out that the idea is to connect two things with a nail.

But those in Washington, from George W. Bush to Ted Kennedy to Hillary Clinton to the National Endowment for the Arts (with their nonsensical definitions of "reading") to profit-chasing academics like Johns Hopkins' Robert Slavin persist in ignoring why a child, any child, any human, would learn to read.

Yo people! Humans learn to read because they want to get to the content of things written down. If they do not want to do that, if you give them no reason to do that, they - almost invariably - will not learn to read.

But go into an American classroom today - especially in one of the absurd places directed by that "Education Mayor" Michael Bloomberg of New York - and you will find reading taught as if it were of no more interest than learning an industrial skill. No wonder they need to offer kids money in exchange for doing it. You wouldn't have learned to operate an industrial loom in 1850s England without a pay envelope either.

It is time to put things back into context. It is time to make school a place of childhood, of inquiry, of intellectual curiosity, of exposure to the world and it's possibilities. It is time to stop testing and start exploring. It is time to let children come to reading rather than forcing children to read. It is time to expect our schools to allow students to find reasons and motivations to learn rather than the continual pouring of trivia and drivel over their heads.

Our world will be a poorer place in the future because of what we have done to children these past six years. We owe the next group of students something much greater.

Fewer than half of American teenagers who were asked basic history and literature questions in a phone survey knew when the Civil War was fought, and one in four said Columbus sailed to the New World some time after 1750, not in 1492.

The survey results, released on Tuesday, demonstrate that a significant proportion of teenagers live in “stunning ignorance” of history and literature, said the group that commissioned it, Common Core.

The organization describes itself as a new research and advocacy organization that will press for more teaching of the liberal arts in public schools.

The group says President Bush’s education law, No Child Left Behind, has impoverished public school curriculums by holding schools accountable for student scores on annual tests in reading and mathematics, but in no other subjects.

Politically, the group’s leaders are strange bedfellows. Its founding board includes Antonia Cortese, executive vice president of the American Federation of Teachers, a union that is a powerful force in the Democratic Party, and Diane Ravitch, an education professor at New York University who was assistant education secretary under the first President George Bush.

“We’re a truly diverse group,” Mrs. Munson said. “We almost certainly vote differently, and we have varying opinions about different aspects of educational reform. But when it comes to concern that all of America’s children receive a comprehensive liberal arts and science education, we all agree.”

In the survey, 1,200 17-year-olds were called in January and asked to answer 33 multiple-choice questions about history and literature that were read aloud to them. The questions were drawn from a test that the federal government administered in 1986.

About a quarter of the teenagers were unable to correctly identify Hitler as Germany’s chancellor in World War II, instead identifying him as a munitions maker, an Austrian premier and the German kaiser.

On literature, the teenagers fared even worse. Four in 10 could pick the name of Ralph Ellison’s novel about a young man’s growing up in the South and moving to Harlem, “Invisible Man,” from a list of titles. About half knew that in the Bible Job is known for his patience in suffering. About as many said he was known for his skill as a builder, his prowess in battle or his prophetic abilities.

The history question that proved easiest asked the respondents to identify the man who declared, “I have a dream.” Ninety-seven percent correctly picked the Rev. Dr. Martin Luther King Jr.

About 8 in 10, a higher percentage than on any other literature question, knew that Harper Lee’s “To Kill a Mockingbird” is about two children affected by the conflict in their community when their father defends a black man in court.

In a joint introduction to their report, Ms. Cortese and Dr. Ravitch did not directly blame the No Child law for the dismal results but said it had led schools to focus too narrowly on reading and math, crowding time out of the school day for history, literature and other subjects.

“The nation’s education system has become obsessed with testing and basic skills because of the requirements of federal law, and that is not healthy,” Ms. Cortese and Dr. Ravitch said.

“You can be supportive of N.C.L.B. and also support strengthening the teaching of history and literature,” a spokeswoman for the Education Department, Samara Yudof, said. “It’s good to talk about expanding the curriculum, but if you can’t read, you can’t read anything at all.”

A string of studies have documented the curriculum’s narrowing since Mr. Bush signed the law in January 2002.

Last week, the Center on Education Policy, a research group in Washington that has studied the law, estimated that based on its own survey that 62 percent of school systems had added an average of three hours of math or reading instruction a week at the expense of time for social studies, art and other subjects.

The Bush administration and some business and civil rights groups warn against weakening the law, saying students need reading and math skills to succeed in other subjects.