Survival and Persistence and 100 years since that day in Belfast

On this 100th anniversary of the launching of the RMS Titanic at the Harland and Wolff shipyard in Belfast (still the world's largest drydock), I wanted to offer this rerun from my oft-neglected fiction site. I love the story included here, and think it says a lot about what it takes to live and learn...

For an essential read on education today, which I somehow think goes along with this, read Harold Shaw Jr.'s post Did Progressive Education do Too Good a Job? 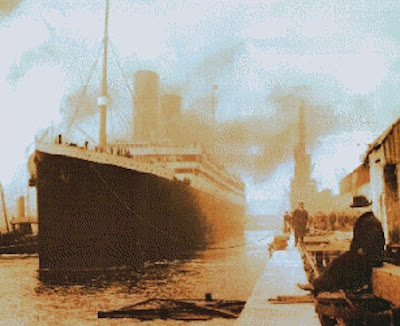 There's the story of this woman. You've probably heard something about her. She survived the sinking of the Titanic in 1912. She survived the sinking of the Britannic in 1916. I thought she had survived the sinking of the Olympic whenever the Olympic had sunk, but she didn't because the Olympic never sank, it was cut into bits in 1935 just a couple of years after being modernized and rebuilt – one more victim of the Great Depression. But this woman, who was a nurse and a stewardess, was on the Olympic in 1911 when it collided with a Royal Navy cruiser that left its shaft twisted and two watertight compartments flooded. I don't think that collision killed anyone, but it was still a pretty big deal. Among other things they had to grab the propeller shaft off the still-in-dry-dock, yet-to-be-completed Titanic to fix the Olympic. This delayed the Titanic's launch and thus maiden voyage from March 1912 to April 1912. Not a long time, but long enough, in that cold year, to create the difference between clear winter sea lanes across the North Atlantic and spring lanes filled with floating ice. Maybe the Titanic still would have struck an April iceberg, but if it had done so on its third or fourth crossing the story might have been, perhaps, a touch less compelling, and maybe, just maybe, that damn movie would've been shorter. I swear that Titanic was filmed in real time and when it first came out I was stuck in that theater for four days, and being on a second date I could barely even complain, but maybe, if I let false memory run away with me, I can remember that the food on-board was quite good.

All things touch all things, more or less.

The Titanic, Britannic, and Olympic were all built at Harland & Wolff in Belfast, in the world's largest dry-dock, on a peninsula called Queens Island, in what is now called Northern Ireland but, of course, back then was just Ireland, part of The United Kingdom of Great Britain and Ireland, a political entity that lasted, quite uncomfortably, from 1801 until 1922. Whether this union was created to insure proper mental health care for the insane British monarch of the time (theory one: the English not trusting the Irish Protestants who made up the Irish Parliament to go along with their plans for a regent) or to punish the Irish for the rebellion of 1798 (theory two), does not really matter. Over the nineteenth century, Scot/Protestant dominated Belfast industrialized, led by the Harland & Wolff Shipyards whose massive cranes ruled the skyline. The rest of Ireland stayed rural and agricultural and the tallest things in the other three big cities, Dublin, Cork, and Derry, remained the towers of the churches.

If you stand today on the edge of the River Lagan, looking across and east, there is still a working waterfront there. Still a dry-dock, still ship repair, or mostly either repainting or fixing offshore oil drilling platforms. It's a long way from the glory of building the world's largest, most luxurious means of transportation, but then, hell, that part of the city is now called, for tourist purposes, "The Titanic Quarter" – which may not be the best advertisement., all things considered. Though I have always wanted to attend a football game featuring the team from Harland & Wolff, The Welders, so that I could lead a chant of "Iceberg Ahead." But I do not go to Irish League games, even first division games where the Welders play, my club having been, hmmm, "dismissed" from the league because it was unsafe for them to play anywhere after Bloody Sunday. So they now play across the border in the League of Ireland, though the "all-Ireland" Setanta Cup had Derry City playing at Belfast's Windsor Park last winter for the first time in over 30 years.

Things can change, if given the chance.

Belfast was once Béal Feirste which means something like "Mouth of the Farset." The River Farset flows into the Lagan someplace north of the Queen Elizabeth Bridge which is way south of those Harland & Wolff shipyards, or where, at least, you'd see them across the river. But you cannot see it. I think it runs underground now through pipes under High Street, and people have told me that Bridge Street is where people once crossed. The kind of victory of man over God's water that the Titanic failed to be.

Violet Constance Jessop died on the Fifth of May in the Year of Our Lord Nineteen Hundred and Seventy-One. She was alive, this amazing survivor of Belfast's repetitive contribution to disaster legends, while I was alive. We were on the planet at the same time. I thought about her as I listened to something on the radio about Americans wanting to go back to the moon. How these "do anything" countrymen seemed to have lost both their nerve and their belief in the cooperative citizenship we call government during the Challenger/Reagan era, but now there was a new generation that could not quite understand the thought that you could go to the moon, but would choose not to. Space exploration - real exploration - is a big waste of money, surely, but it is also absolutely magical, and absolutely human. When humans can try something big, something huge, something that will reach toward heaven, I think that they should, I think that they must.

Were these dominating "massive cranes" another Tower of Babel. Somehow I believe that God needs to remind humanity that we are "sinkable." I completely agree in magically reaching, just also acknowledge the ground at which we stand.

By the way, I wanted to have a personal conversation with Queen E. when she visited Ireland recently. How did she really feel during her visit? Can Britain and Ireland progress cordially?

Ira Socol uses the historic event of the sinking of the Titanic to express his reflections on progressive achievement in education. He relates the inspiring story of a survivor who brushed herself off and kept believing. He ends the article by saying that we must keep reaching for successes even in the face of great failure; and we must acknowledge the progression along the way.

Were these dominating "massive cranes" another Tower of Babel. Somehow I believe that God needs to remind humanity that we are "sinkable." I completely agree in magically reaching, just also acknowledge the ground at which we stand.

By the way, I wanted to have a personal conversation with Queen E. when she visited Ireland recently. How did she really feel during her visit? Can Britain and Ireland progress cordially?