Can our President multitask?

In the 1990s there was a joke going around that President Clinton was "one Ritalin pill a day away from being a great President," and maybe that was true.

And in the 1970s, Jimmy Carter seemed to be keeping track of a million things at once...


And I thought of this while fighting with Justin Hamilton who tweets as @EDPressSec about the Department of Education's plan to strip away alternative testing from Special Education students.

This is a huge issue, one which the Department of Education's Press Secretary refused to discuss.* It is huge because forcing special needs students to take inappropriate tests is abusive. And because the goal would seem to be - based on other actions of US Secretary of Education Arne Duncan - to be to force ever more public schools into being listed as "failures" by the national government. That, in turn, seems a political move designed to enrich certain Obama fundraisers who have invested heavily in privatized education.

But one of my Twitter pals noted something quite important: "likelihood of this issue having risen to Obama's attention? Probably zero, though...."

And yes, President Obama, for all his brilliance, for all his education, is a highly traditional learner and thinker. A straight-line, one issue at a time guy. And this week, for clear reasons, he is focused on Osama bin Laden and Pakistan and Al Qaeda. Just as in his first two years in office he focused first on the economy, then on health care.

Is that the kind of leadership this century needs? Or should "ADHD" and that much-questioned "multitasking" be a required part of 21st Century leadership descriptions?

This question, unlike the two things at the top of this post, is not a joke. It is a vital query into both leadership and education. For President Obama, the child of two very brilliant, but two very traditionally trained learners (one via US system, one via British system), seems the quintessential "industrial age" learner and leader. And we need to consider that, and wonder if that is working for us.

This is not to suggest that leaders should not delegate authority or utilize the incredible power of community cognition and collective intelligence, but in order to harness the power of those things a leader must see as much as possible, all the time - what David Packard called, "management by walking around."


"Why should you bother to get up off your ass and regularly tour the building, the warehouse, the delivery and shipping area? Aren’t you too busy? But that’s the danger: not knowing what is going on in all areas of your business can see you too busy managing the wrong things: you become a “Busy Fool”. You should, as often as you can and without indulging in irritating micro-management-style techniques, step over the filters and barriers that stand between you and the people on the ground. Your direct reports will often not want to tell you certain things at certain times. They will often deliver news in a certain way. Go and find out for yourself: see reality without the sugar-coating." - Colm McCormack


"Hunter-gatherer children were the freest human children ever to have walked the earth. Hunter-gathers believed that children learn through their own, self-directed, self-initiated play and exploration, so they allowed their children unlimited time for such activities. In a survey of hunter-gatherer researchers that I helped to conduct some years ago, all said that the children in the group that they had studied were free to explore on their own, without adult guidance, essentially from dawn to dusk every day. They were allowed such freedom beginning at about age 4 (the age at which, according to hunter-gathers, children "have sense" and do not need to be watched regularly by adults) on into their mid to late teenage years, when they began to take on adult responsibilities. By providing children with food and other subsistence needs, and by not burdening them with many chores, hunter-gatherer adults allowed their children ample time to educate themselves."

This kind of open education form, which when you think of it, might closely parallel what a rebellious Bill Clinton or a farm-raised Jimmy Carter experienced growing up, seems to produce a very different learning and leadership style than the highly formalized educations of young George W. Bush or Barack Obama.


"What kind of mother was she? At least where her son was concerned, she was never without a workbook. She placed a great emphasis on manners; from an early age, Barack Obama was exquisitely polite. Into him Ann [Dunham Obama] Soetoro drilled a sense of duty to the world, the importance of hard work, the need to give back." "Most of all she stressed—by example as much as anything else—the value of education. It determined the geography of Obama’s early years. His mother typed and corrected his homework. From his memoir, we know about the 5 a.m. study sessions."

This is formalized, linear, "education as work," training, and it sunk in, creating in the current US President an extremely formalized, careful, single-focused learning and leading strategy. It is thus not, as I have sometimes charged, that "Obama doesn't care about children or education," rather, as my friend suggested, it is that the needs of children in America and the education system simply do not reach him - he has handed them off to a basketball-buddy-subordinate, and these issues are not in his current curriculum. Even when he goes to a school, he usually sees nothing because his "5 a.m. study sessions" have been about something else, and even when he answers an honest school question honestly, his current curriculum has not trained him to compare his human thoughts with his scientific policies.

This does not mean that President Obama makes bad decisions, clearly, deeply focused choices such as the stimulus plan and the raid on Osama demonstrate a high-quality of decision-making. Rather, it is that President Obama makes too few decisions. His mother never let him learn to choose to study or not, or where, or how. His very traditional private schools never allowed him to choose where to sit, or whether to go to class. He learned that learning came from books or carefully constructed experiences. One suspects that he never really learned to look around in wonder.

David Russell wrote a piece on how American Neo-Liberalism was the cause of America's viciously anti-child "education reform" movement, and I cannot argue with that, but perhaps the bigger issue is why this nonsense is so accepted... and I'm here to suggest that it is suggested because it offers a 'certainty of answers' to our 'rationally trained scientific managers' such as America's President. If you never actually see or hear students or teachers, if you never actually gaze around yourself without preconception, then you turn to a subordinate like Arne Duncan and want one sentence assurances that you are doing the right things.

But I'm not really writing about global educational policy here, or about Barack Obama. I'm writing a question: what kind of learning, what kind of leadership, is your school, is your classroom, training your students for? 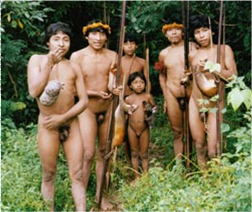 "The most important and general way by which hunter-gatherer adults helped their children learn was by providing an always supportive, always trustful environment. To educate themselves, children need to feel emotionally secure and confident. By trusting children to know what is best for themselves and by making that trust apparent, adult hunter-gatherers provided the conditions that all children need, if they are to feel confident about taking control of their own lives and learning. Because all adult members of the band cared about and provided for the emotional and physical needs of all of the children, and because it was a cultural taboo ever to deliberately hurt a child, the children grew up feeling that others were trustworthy, which is a prerequisite for becoming trustworthy oneself. In such an environment, children's instincts for self-education flourish. That is as true today as it ever was.

"The secure child, raised in a setting where others are loving, trusting, and nonjudgmental, and where the tools and examples needed for education are available but not forced upon anyone, vigorously and joyfully undertakes the natural childhood task of self-education. Unfortunately, in our schools, we replace security with anxiety as the foundation for learning, and we keep children so busy doing what they are told to do that self-education becomes essentially impossible. In schools we "teach" in ways that subvert children's natural instincts to learn and that replace trust and security with distrust and anxiety." - Peter Gray

*Justin Hamilton graduated from Houston's public schools when former Bush, Jr, Secretary of Education Rod Paige was in charge. Paige, it turns out, lied about all of his districts graduation and academic statistics, so what education Mr. Hamilton actually received might be up for debate.
Posted by Unknown at 5/04/2011 10:51:00 AM