Of time and technology...

"It's half seven in the morning and I'm still hoping some big flood of snow is going to come so that I can miss school," I read on a blog one day. "Krish was convinced that he would catch “his girl” the next day around quarter to seven in the evening, as it was around that time he saw, rather gawked at her for the first time," I found on another blog.

So, what time is it? And how are we teaching kids the telling of time?


"I was sitting in the train going home the other day when the man opposite me leant over and said: "Excuse me, but have you got the right time?"

"Interesting?" I said. (I should know better by now than to say things like that to people who are clearly looking for the merest toehold in order to clamber into a conversation.)

"Which is unfair on the young."

"I'm not sorry," I said. "I only said I was sorry as a way of saying that I didn't understand what you were driving at."

"If we all said what we really meant," I said, "we wouldn't have any friends left, and we would be reduced to striking up conversations with total strangers on trains."

There was a strained pause. I relented. "So, why is it unfair on the young?"

"Well," he said, "because young people have become used to telling the time from their mobile phones or computers, and it is always done in terms of digits. 10.47, they say. 3.27. 1.04. A mobile phone never tells you that it is a quarter to seven."

Except this conversation is wrong. Because, as is obvious from the very first paragraph of this piece from the Independent in 2006, "we" no longer say, "it's a quarter to seven," unless we define "we" as a certain subset of the population - certain people born before 1980. 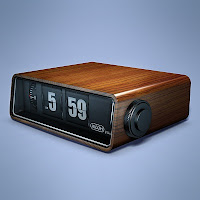 In fact, "old school" for clocks is now represented by the late 1970s flip clock technology. It is on my phone. It is on many computers. That concept of all those little paddles flipping over is "steam punk" in the 21st Century.

So now - in an age when the wrist watch has shifted from tool to jewelry - we look at our phone or our computer and we say, "it's 6.13," or, "it's 7:35," using periods or colons as markers of our preferred side of the Atlantic Ocean.

Does this represent a collapse of either our language skills or our numeracy skills? Shouldn't we still be teaching the "analog" clock face and the older language of time?

I think not. After all, both of those simply represent an earlier conversion of human experience by technology. There's no intellectual, moral, or linguistic superiority in being able to read a circular gauge vs. reading a numeric image, nor in using the language of pictures vs. the language of numerals - as long as everyone fully understands what information is being transmitted.

"It's half seven in the morning and I'm still hoping some big flood of snow is going to come so that I can miss school."

Lots of time telling devices - and the languages fostered by those technologies - have come and gone over human history, from Stonehenge to the sundial. Both of those, of course, can prove difficult to use, especially with daylight savings time and other such contemporary twists. And the same is becoming true of the circular clock face and its "steam punk" phrases - "quarter to," etc (funny, why didn't we say "it's a third past"? - Christian Trinity and all...).

So when I sat in an elementary school last week and saw a lesson on time and quarter hours I wondered why we were still doing that - other than, in this case, mandates from the Commonwealth of Virginia? So I asked teachers sitting near me, and only one in five still tended to use those old terms.

There is a lovely antiquity, I suppose, in the nature of that circular clock. But it encourages imprecion and confusion, and barely is used anymore in a functional way.

So why are we teaching it?

We're teaching the circular clock because that's the machine that teachers think of when you say 'time.'

And really, the circular clock face goes back quite a ways. It's everywhere, so kids might as well learn to read it.

Of course, understanding the circular clock face is not at all the same as understanding time... A good subversive teacher could use this fact to illustrate not only time, but social change, mechanical engineering, the relationship of time measurement to geography... Accurate clocks and GMT were originally navigational aids, after all.

I like the idea of teaching the circular clock still. It is important that children still know how to tell time from a circular clock, because what if they don't have a digital clock and need to know what time it is. However, the teachers need to be sure that their students are understanding how time works and functions.

Funny, as someone with ADHD, I find that old circular clock really helps with my time issues. 15 minutes feels more abstract to me than seeing that quarter of an hour gone--it gives me a graphic to understand time beyond numbers (my old enemy, math.) This could just be a function of age, but I've heard teachers say having a huge analogue clock helps some students pace in a way a digital one doesn't.