At 0500 hours of "French Time" on the 11th of November, 1918 representatives of the new socialist German government and those of the British, French, Italian, and American governments signed an Armistice ending hostilities on the "Western Front" of The Great War. This cessation of battle would begin six hours later, on the "Eleventh Hour of the Eleventh Day of the Eleventh Month."

1. Hostilities will be stopped on the entire front beginning at 11 o'clock, November 11th (French hour).
2. The Allied troops will not go beyond the line reached at that hour on that date until further orders.

In the United States, where even Vietnam is a forgotten bit of ancient history, "Veterans Day" is simply part of the early Christmas sales period. In Britain "Remembrance Day" will involve two minutes of silence and a day of the "coalition" government cutting benefits for those in need. France, where the so many of the battles of 1914-1918 were fought and the scars are still visible across that nation's northern landscapes, the day will be different...


"Here in France, Armistice Day will be observed in silence. The shops are closed, the roads empty. (The boulangerie will open this morning, it even opens on Christmas Day; fresh bread daily for every citizen is embedded in the French psyche since the revolution!) At 11am every village memorial will be surrounded by a solemn and silent group of aged men and women."

How can you bring this day's meaning to life in your classroom? Perhaps with one bit of writing, writing which challenges conceptions of both war and representation as that war challenged society - producing "The Lost Generation" and modern literature. This is the last chapter of John Dos Passo's book 1919

, and it merges the multiple formats which form those books... fictionalized narrative, biography, found poetry ("Newsreel"), personal narrative ("The Camera Eye") into an autobiography of the unknown soldier.

What does this say about war, about witness, about authorship, about narrative? Why would war - total war - challenge even punctuation? And if you are reading The Great Gatsby

this year, what does this say about Jay Gatz?


The Body of an American 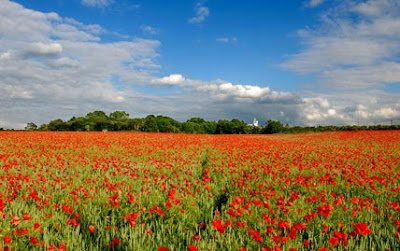 In the tarpaper morgue at Chalons-sur-Marne in the reek of chloride of lime and the dead, they picked out the pine box that held all that was left of

and other person or persons unknown. Only one can go. How did they pick John Doe? . . .

how can you tell a guy’s a hundredpercent when all you’ve got’s a gunnysack full of bones, bronze buttons stamped with the screaming eagle and a pair of roll puttees?

. . . and the gagging chloride and the puky dirtstench of the yearold dead . . .

The day withal was too meaningful and tragic for applause. Silence, tears, songs and prayer, muffled drums and soft music were the instrumentalities today of national approbation.
Unknown Soldier

John Doe was born (thudding din of blood of love into the shuddering soar of a man and a woman alone indeed together lurching into and ninemonths sick drowse waking into scared agony and the pain and blood and mess of birth). John Doe was born

and raised in Brooklyn, in Memphis, near the lakefront in Cleveland, Ohio, in the stench of the stockyards in Chi, on Beacon Hill, in an old brick house in Alexandria Virginia, on Telegraph Hill, in a halftimbered Tudor cottage in Portland the city of roses,

in the Lying-In Hospital old Morgan endowed on Stuyvesant Square,

across the railroad tracks, out near the country club, in a shack cabin tenement apartmenthouse exclusive residential suburb;

scion of one of the best families in the social register, won first prize in the baby parade at Coronado Beach, was marbles champion of the Little Rock grammarschools, crack basketballplayer at the Booneville High, quarterback at the State Reformatory, having saved the sheriff’s kid from drowning in the Little Missouri River was invited to Washington to be photographed shaking hands with the President on the White House steps;—

though this was a time of mourning, such an assemblage necessarily has about it a touch of color. In the boxes are seen the court uniforms of foreign diplomats, the gold braid of our own and foreign fleets and armies, the black of the conventional morning dress of American statesmen, the varicolored furs and outdoor wrapping garments of mothers and sisters come to mourn, the drab and blue of soldiers and sailors, the glitter of musical instruments and the white and black of a vested choir

worked for an exterminating company in Union City, filled pipes in an opium joint in Trenton, N.J.

Y.M.C.A. secretary, express agent, truckdriver, fordmechanic, sold books in Denver Colorado: Madam would you be willing to help a young man work his way through college?

President Harding, with a reverence seemingly more significant because of his high temporal station, concluded his speech:

We are met today to pay the impersonal tribute;

the name of him whose body lies before us took flight with his imperishable soul . . .

as a typical soldier of this representative democracy he fought and died believing in the indisputable justice of his country’s cause . . .

by raising his right hand and asking the thousands with the sound of his voice to join in the prayer:

Our Father which art in heaven hallowed by thy name . . .

alive thudding silence of blood in your ears

down in the clearing in the Oregon forest where the punkins were punkincolor pouring into the blood through the eyes and the fallcolored trees and the bronze hoopers were hopping through the dry grass, where tiny striped snails hung on the underside of the blades and the flies hummed, wasps droned, bumble-bees buzzed, and the woods smelt of wine and mushrooms and apples, homey smell of fall pouring into the blood,

and I dropped the tin hat and the sweaty pack and lay flat with the dogday sun licking my throat and adamsapple and the tight skin over the breastbone.

The shell had his number on it.

The blood ran into the ground.

The service record dropped out of the filing cabinet when the quartermaster sergeant got blotto that time they had to pack up and leave the billets in a hurry.

The identification tag was in the bottom of the Marne.

The blood ran into the ground, the brains oozed out of the cracked skull and were licked up by the trenchrats, the belly swelled and raised a generation of blue-bottle flies.

and the incorruptible skeleton,

and the scraps of dried viscera and skin bundled in khaki

and laid it out neat in a pine coffin

and took it home to God’s Country on a battleship

and draped the Old Glory over it

and the bugler played taps

and Mr. Harding prayed to God and the diplomats and the generals and the admirals and the brasshats and the politicians and the handsomely dressed ladies out of the society column of the Washington Post stood up solemn

and thought how beautiful sad Old Glory God’s Country it was go have the bugler play taps and the three volleys made their ears ring.
Poppies

Where his chest ought to have been they pinned

the Congressional Medal, the D.S.C., the Medaille Militaire, the Belgian Croix de Guerre, the Italian gold medal, the Vitutea Militara sent by Queen Marie of Rumania, the Czechoslovak war cross, the Virtuti Militari of the Poles, a wreath sent by Hamilton Fish, Jr., of New York, . . . . All the Washingtonians brought flowers.

August 1978. I was twenty. I saw the row of crosses across the French countryside and I remembered. From Combray down to Rouen. Sobering.

"How can you bring this day's meaning to life in your classroom?"