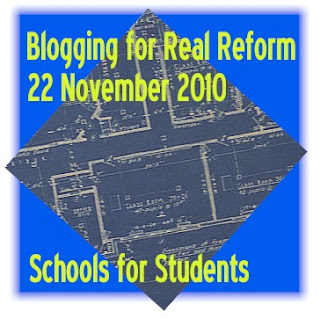 This is not the first time I have said this, but it is the thought which must begin any conversation about truly "re-forming" our education system. The system in use in the United States, in Canada, in the United Kingdom, in Australia, in Ireland, et al, was designed to fail 75% to 80% of students. The idea, whether the builders were Henry Barnard and Ellwood Cubberley or Henry Brougham and William Edward Foster, was to find a very few students who might arise from the lower classes while consigning most students to the mills and mines of 19th Century industrial society.

So, if our schools are only failing 50% to 65% of students - as they are - the system is already performing way above its design capabilities. "We want one class to have a liberal education. We want another class, a very much larger class of necessity, to forego the privilege of a liberal education and fit themselves to perform specific difficult manual tasks." - Woodrow Wilson

The heart of this "designed to fail" system is the "age-based grade." The notion that student "raw material" is brought in at age five, and after 12, 13, 14 "stampings" with "grade-level expectations," that "raw material" will be transformed into a "value-added product," a manufactured worker-citizen designed to fit into the proper slot in the capitalism of the second industrial revolution.

Age-based grades do one more thing - by forcing the industrial process of stampings and standards on education it labels failure the fault of either the production line workers - teachers - or the quality of the raw material - students and their parents. Those in power are never at fault. No wonder Michelle Rhee nor Joel Klein nor Arne Duncan can ever find fault with either themselves or the structure of the system.

Change anything else without doing away with the tyranny of age-based grades and your reform will fail because students will never be allowed to truly develop as humans - at a rate and in a pattern appropriate for their own needs. Only when you toss out this industrial structure - the Prussian Model - can teachers and students really begin to re-imagine school. 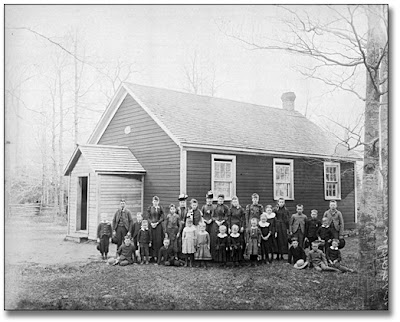 Don't believe the myths. Age-based grades were neither inevitable nor scientifically discovered. Before the mid-19th Century most schools were a mix of all ages gathered in one room. Students began when they began - both at age and at time of day (when chores were completed) - and they moved at their own rate, mentored by more advanced students. I'm not claiming these were perfect places - they were not in any way - but they did not expect every 5-year-old to be doing the same thing, or every 12-year-old. They did not measure via "standards" or "bell curves." They did not judge attendance or presume that everyone was "following the teacher with their eyes."

The Prussian Model was brought to English-speaking nations (and others) not for educational purposes but for industrial capacity. As the German Empire needed compliant worker-soldiers (raised step-by-step and separated into cannon-fodder, non-coms, and officers), so the United States and the British Empire needed compliant worker-citizens (separated into manual laborers, clerks, managers). Real education, in all three environments, was the work of private tutors and elaborate schools for the children of the wealthy.

That "real education," with plenty of room for creativity, individual development, and second chances, contrasts sharply with the increasingly reductionist "back to basics" platform hawked by our elites for all the "other" kids. But then, those children of the rich and powerful are being groomed to be leaders, not the followers Michelle Rhee and Cathie Black hope to create, so they are allowed to develop appropriately, allowed to be children, and allowed to cultivate a variety of skills.

So, what to do: First, all standardized tests based in "grade-level expectations" or age need to be eliminated. Obviously, it is incredibly difficult to break up these age-based cohorts if teachers' jobs and school reputations are based in test results based in age. Second, our curricula need to be re-designed around expected competencies - skills, knowledge-base, etc - that our students can check off as they move through an individualized study program in a multi-age environment. Third, every student needs an individualized education plan - not just "Special Needs" kids. The notion of "mass Instruction"

is inextricably tied to the industrial educational model, but kids are humans, not interchangeable parts on Eli Whitney's or Henry Ford's assembly lines.

Fourth, we must think about those multi-age environments. Whether the U.S. K-8 then High School system, the classic British Reception-Year Six Primary followed by Secondary (or Secondary plus Further), or Infant Schools, Junior Schools, Secondary Schools - we need to experiment with the best ways to create these multi-age mixes, and we need to - probably - develop a choice for kids in every neighborhood public school between large multi-teacher, many child classrooms and smaller group single-teacher classrooms. For in this future, one-size still will not fit all.

And fifth, we must embrace the contemporary technologies which support individualizing education. One-to-one computing, with individually, task-chosen technologies (including handheld), allow children to move and learn as they need. Embracing these technologies means abandon our inordinate concern with "how" kids do things (handwriting, reading only via ink-on-paper, etc) and instead focus on what they are doing, and what they are learning.

When our current systems of education were constructed, they were designed to fail the vast majority of students, and the first step in doing that was to separate students into age-based grade cohorts with rigid curricular standards - ensuring that anyone who fell behind would never catch up. Those systems, with their "retarded labels," their "retention" issues, their "age appropriate"

dumbing down of study, remain the key impediment to truly "re-forming" education.

Start by breaking that failed system. Then we can move ahead.

Thanks to all who are participating in this international day of blogging for real educational reform. You can post your blog's link in the comments here, or - preferably - post it to our Wallwisher page.
Please inform your elected representatives and your local and national media of our efforts today. Get everybody reading, everybody talking. The Twitter hashtag is #blog4reform. Also link your post via comment at http://coopcatalyst.wordpress.com/2010/10/29/ideas/

My post is a piggy-back to Ira's so it's especially appropriate to link to it here http://developingprofessionalstaff-mpls.blogspot.com/2010/11/for-my-nov.html

Ira, did you notice in the info I linked to you re The History of Victorian Education in Australia, that it was based on the Prussian Model identified by James Forbes (page 12).

Many more links at http://coopcatalyst.wordpress.com/2010/10/29/ideas/ even if Wallwisher is frustratingly down

Ira, you may be interested in reading my mother's account of her innovative multiage elementary classroom that has come to an end this year with the retirement of the last of its teachers. Their innovations and experiments were so forward thinking, and many alums of the program (now adults in their 30s and 40s) remember every detail of their experiences during their three years in the program, including the annual production of a Gilbert and Sullivan opera.
Miletta, M. (1996). A multiage classroom: Choice and possibility. Portsmouth, NH: Heinemann.
- Alexandra

This is water in the desert. Please don't stop. Programming is what we do to robots. When we do it to people, it kills their intelligence and creativity through induced 'downshifting' in the brain. The education systems of the English speaking world will, I hope, one day be classed as a crime against humanity.