It's a great moment in the sports calendar for me. A summer with the FIFA World Cup overlapping the Tour de France. I could write about how new technology like Verizon's VCast brings sports events like this to my mobile phone, which is great because, with very few exceptions, I refuse to let "life" stop for a sporting event I'm not participating in ("work" can stop, but you can't skip family events or relationship stuff or friends' needs for things like this), but what is more important is what these sports demonstrate, and how they differ from "traditional American sports," and from the cultures of our schools. 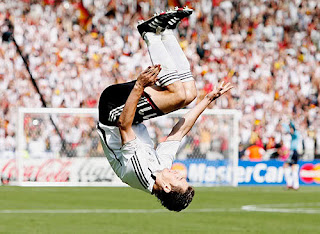 I was sitting with my not-quite-father-in-law, a Midwestern American who had really never seen soccer before meeting me, and as I explained things, I realized - again - how different the world's football game is from the sports which developed in the United States. Different in continuity of action. Different in what is prized in athletes. Different in an understanding of the rules. Different in expectations - and obligations - to spectators. And vastly different in organization.

It isn't just that Americans are troubled the soccer games don't stop so that they can get another beer from the bridge or hit the loo. Or that Americans are horrified that the game doesn't stop so the referee can tell the crowd exactly what just happened. Or that the ambiguity of the game clock is inconceivable to Americans raised on a culture of "3-2-1" countdowns. There are fundamental conceptual things which make both soccer, and cycling, a whole 'nother thing. A thing, which we, as educators, can learn from.

(1) Winning looks like a lot of different things: In football, as it is played in most nations, there are lots of winners. There is usually a season champion in each league or level - the team which amasses the most points over the course of all the games. This is "the big deal" everywhere but North America, where the "regular season championship" means nothing. Then there is a National Cup, a competition open to virtually any team - a vast elimination battle but one in which everyone can participate, and in which "success" is measured against expectations. And then there is a League Cup, a competition for the three or four top level teams, kind of like an "open" playoff.


But there is more. Here is the Southampton Football Club celebrating finishing 17th in the English Premier League in 1999. Yes, 17th. But 17th is "survival" in that league. The teams which finish 1-17 get to stay in the top league, 18-19-20 get sent down to the next lower level of competition (replaced by the top teams from the league below). So 17th can feel mighty good for teams struggling. There are also places in the Champions League and the Europa League to be won. 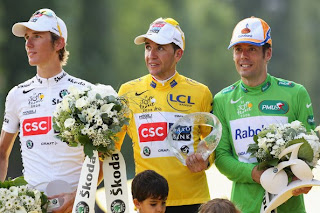 Likewise in the Tour de France, where winners are celebrated at every stage and for every thing - overall, young, sprinters, mountain climbers, et al.  By the time the Tour winds up over 100 riders might have been declared "winners" of one sort or another.

In the US, of course, the Buffalo Bills, an "American Football" NFL team which remains the only team to ever appear in four consecutive Super Bowls, is regarded as the ultimate loser team because they failed to win those championship playoffs. In the US, and in traditional schooling, there are few winners and many losers. See the horror expressed by many Americans when even the idea of "Class Valedictorian" is expanded.

Think about your school - where's your "King of the Mountains" jersey? Where's your party for finishing 17th?

(2) Not everyone does the same thing or is judged in the same way: In the Tour de France some of the greatest bicycle riders on the planet enter without any expectation - any thought - of winning, or really, even trying to win as individuals. They are there to support their teammates. Likewise, in football, many players can go through many seasons without scoring a goal, or perhaps, without taking a shot - their only statistical line being "minutes played." 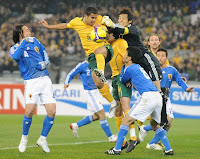 We expect very different things from Philipp Lahm and Miroslav Klose, for example. Not because there are different rules for different positions (as, say, in the NFL or American League Baseball), but because people are different, athletes are different, and differing skills, capabilities, and interests create differing ways to contribute... but... unlike basketball or hockey, you still "play the whole game" in soccer and in road bicycling. You don't only play offense or defense or as a penalty killer. You can't just be put in to "give a foul" or spell a star. Once you are in, you are in, and everything that comes at you is yours to deal with.

The idea that we expect the same thing from every student (United States) or that we assign specific futures to certain students (the classic European model) are both anti-human and anti-potential. Students need to be given the opportunity to discover how they - individually - will succeed. And our measurements cannot be universal "standards" - they must be based in the individual.

(3) Failure is short, the game is long: Nobody likes John Terry much. OK. But John Terry demonstrated something essential a couple of years ago in a Premier League match. Early in that match, defending on the goal line, Terry's attempted header clearance turned into an "own goal" (that is, he scored against his own team). That is a major failure. But later in the game, there was Terry again, on the goal line again, this time heading away a potential go ahead goal from the opposition.

Because neither soccer nor road cycling stop, you may screw up but you have no time to sulk, no time to go into a funk - you have to just keep going.

I always told the soccer teams that I coached that if you get beat while playing defense the only response is to get yourself back into position to try to stop the next opposition move. The only response to a bad cross or shot is to try a better cross or shot. In US sports the action stops and your coach pulls you out of the game or tells you what to do next time. But in soccer, in cycling, you learn to keep yourself in the game - failure after failure.


We need to help students learn to stay "in our games." To allow failure to seem very important - except as a motivator and lesson learned. When "the cost of failure" is lowered, education can occur.

(4) There are many possible paths: In road cycling, in football, there are many strategies. Different teams make different choices, choices which are not "right" or "wrong" but which seem to be the best fit for the athletes involved. Could England play like Brasil? Probably not. Do Tour de France teams vary their efforts according to the strengths of their top riders? Of course. And when coaching fails miserably, it is often the result of a dramatic mismatch between a coach's pre-ordained belief system and the skills and styles of his/her athletes.

So there are no "middle school planners" in these sports. No "scripted instruction." The training sessions will never look the same between teams. Good coaches speak to different players differently. Because humans and humans. And no two humans are alike.