In my eighth grade science class, Mr. Rotandaro used the classroom film the "old way," as a time waster for a group of students he wasn't interested in teaching. Day after day we watched double features of anti-drug and "VD" movies, so many that we were digging deeply into the bottom of the city's health department film vault.

There was no science education going on, but we did laugh a lot. And in eighth grade, well, that ain't bad. 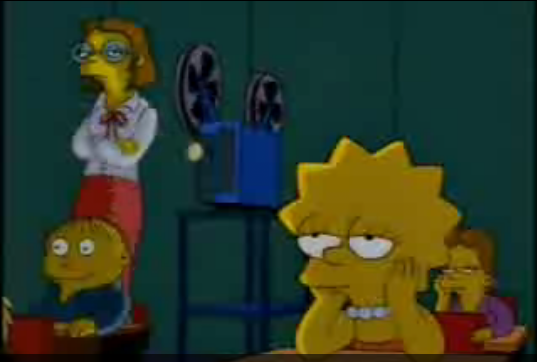 Lisa watching films, filmstrips, and experiencing "magazine time" (in Russian)
In my English class, regarded as "Dumb English" by the school, with kids mostly expected to hit the "Voc" programs in high school, our teacher, Alan Shapiro, had other ideas. We read the great dystopian novels in that class: Animal Farm, Fahrenheit 451, 1984, Brave New World, Lord of the Flies, perhaps a typical middle school syllabus, but... It is important to remember that a number of us in the class really could not read. And many could surely not read well enough to get through any of these books on our own, but it was Mr. Shapiro's belief that we could all still be part of the conversations.

So he, and some students (volunteer only) read parts of the books in class. He used props too, lining the walls with huge posters of Stalin when we read 1984. Sometimes he'd play audiobooks. And for each book, we trooped across the corridor and sat on the floor of the huge old castle-dining-hall looking auditorium, and watch the films made from these books. 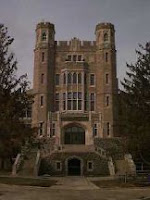 Because of the limitations of class periods, and access to the auditorium, these "film watchings" usually spread across a week, which gave us plenty of time to discuss what was going on, both in terms of literature and in terms of audio and visual manipulation - Shapiro being a huge believer in the need to develop "crap detecting" skills in students.

<--- for more on life in this school, you can read the book

And as we watched the films, silence was neither expected nor even encouraged, and conversations did break out, sometimes requiring that we stop the film to talk about something of interest.

In simple terms, Mr. Shapiro had designed a Universal Design classroom, long before the term would be invented, long before the technologies of today would make this type of media switching easy. And in doing so, he created an English class in which everyone, yes everyone, succeeded.

I decided to write this post after a quick Twitter conversation: We were discussing Little Big Man

which was running on Turner Classic Movies. And I asked if anyone used this film in class. @tkraz said his students read it

, but, "The only film version we watch of something they have read is The Simpsons The Raven (and Whacking Day paired with The Lottery)" and, "Would be cool - I have to struggle against them turning it into nap time. Could watch 3:10 to Yuma and Old Man and the Sea. Maybe..."

So I suggested that he try TodaysMeet as a way to get kids engaged in 'active viewing,' that he break the films up into 'chapters,' that he investigate what the director was doing. A system like TodaysMeet can do amazing things in a classroom, quoting one observer: "The students were engaged in 50 minutes of this video, They were collaborating in real time with one another in a mode that did not overtly bother any other student (or teacher), The "playing field was leveled" because each student was sitting at a single computer (mixture of desktops and laptops - old and new), and finally, The teacher was able to produce a "transcript" (of 20 pages in length!), which accurately shows what each student was thinking during the experience, Oh yeah, and when asked later, the students DO want to do this activity again!"

And from another: "TodaysMeet.com is a service allowing us as teachers to enter the teen psyche and surreptitiously discover what they are talking about “behind our back” during a lecture, a discussion, a guest speaker, a viewing of a film, and so many other school activities requiring them to be a passive audience member.  TodaysMeet.com EMPOWERS you as the teacher because students are held accountable for listening; they are no longer spectators, but participants in an interactive audience requiring them to hold their own by providing comments, questions, speculations, arguments, answers, solutions, evidence, opinions, explanations, reflection, analysis, application…the list of possibilities is endless and dependent on the criteria YOU set for the “backchannel” conversations students undeniably have behind our backs."

So, start the film, enable the backchannel, pose your questions, and let your students learn that literature is not only on paper. Let them, as you advance, discuss why storytelling changes when the medium changes, or why storytelling changes when different people try to tell the same story, or the same story is told in different times and/or places.

This is vital education on so many levels, including the absolute need for our students to be able to work with audio and video literary forms via the same kind of critical thinking process we try to apply to books. Why - an example - did the film (and TV show) of the novel M*A*S*H

than Korea? Or, why do film versions of books change when they are re-made in a different decade? Or, what kinds of books translate best into movies? (Consider Stand By Me

or A River Runs Through It

, films made from novellas - Different Seasons

and A River Runs Through It and Other Stories

Combine this with allowing your students to respond to literature "their way," writing, dictating, creating a podcast or a video, putting on a play, re-making a scene, and you've got a Universally Designed literature experience, and you have rebuilt your English classroom in a way the enables and empowers all of your students.

Seems worth a try, doesn't it?

I went to a school that looked like a castle too!

As usual, there's so much to digest here. I've heard about using twitter for constructing a backchannel discussion in a classroom. Today's Meet looks like a handy way to do it with or without twitter. I set up a room to experiment with for the upcoming Wakonse conference I'll be attending in Michigan next week. It will be interesting to see what develops from that as there are always outstanding college educators who show up for that.

I always struggle to foster discussions in my class, mostly because I don't plan them out well in advance. Maybe your discussion tool will help me in this a little.

I ran across this teacher, Dan Meyer recently and thought of you. He talks about teaching math with some of the methods you are describing. If you think about it, the Math teacher faces some of the same problems that an English teacher faces with kids who can't read. For whatever reason, many kids don't "get" the language of Math (I was one of them). But through thoughtful discussions and encouraging thinking outside of traditional ways, I suspect he's reaching a lot more kids than the average Math educator. What do you think?

Nice blog it is maintained good and also have good post about Web Design and Graphic Web Design.