John Lindsay and the Audacity of Hope 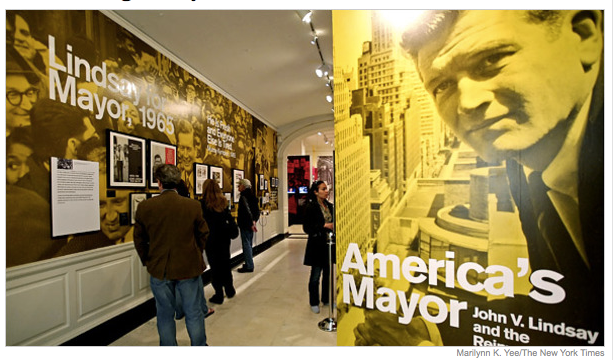 As Lindsay is remembered this season, with a major exhibition at the Museum of the City of New York and with a documentary from New York public television station WNET-13, I would like to offer a counter assessment. I do this not just in a continuing attempt to set the historical record straight against what I consider the "historical fictions" of America's right ("Lindsay proved that big government doesn't work, he bankrupted the city." "Ronald Reagan won the Cold War." "The Great Society was a total failure."), but because the Lindsay Administration in New York City can tell us a lot about how we, as a society, perceive and build change. And that is very important for those of us seeking to re-imagine education.

For in the Lindsay Administration all hopes were welcomed, all changes were considered possible, all things which might promise an improved life were worth experimenting with, aesthetics mattered as much as spreadsheet numbers, feelings and empathy were more important than control and efficiency, and the general public was actually asked to "Give a damn."

This wasn't job lip service. Cars were kicked out of parks and the public was welcomed in. Museums went from stodgy palaces of the elites to welcoming institutions for everyone. College access was promised to all high school graduates - an idea almost 4 decades ahead of its time. Cleaning the air was considered important, long before the Feds began to enforce this idea. Cops were asked to influence crime through presence and community policing rather than through force. Schools were built. Subways were air conditioned so everyone might have quieter more comfortable commutes. Zoning was re-crafted to encourage public spaces. Cheap theater tickets were distributed - a system which remains a boon to tourists, the Broadway industry, and middle-class New Yorkers to this day. Historic buildings were protected. Racial integration was expected.

Did it all work? Hell no. We know that. The parks didn't have enough money to keep up with maintenance once user traffic tripled. The early air conditioners in the subway broke down and the newer-style windows didn't open much. The City University System (CUNY) lacked both the money and the faculty will to make "Open Admissions" work. Everything from clean air requirements to non-discriminatory hiring expectations to historic preservation scared businesses, which often moved away from regulations to New Jersey.

But, let me state the obvious, perhaps because of all these attempts, or - at least "obviously" - in spite of them, New York City survived 1965-1975, something many cities in the US really did not (see Detroit, Cleveland, Buffalo, Newark, Washington DC, Los Angeles, Oakland, et al). Sure New York lost population (almost 10%), lost jobs and industries, and found itself bankrupt financially (primarily though, to be clear, because taxes levied in New York City supported the entire state and a large part of the nation - not because New York City lacked the requisite wealth). Those losses, however, were minimal compared to almost any other American city, and in 1976 that "bankrupt" New York could easily welcome the world to the completely successful American Bicentennial celebration. New York could hardly be said to have "collapsed" under Lindsay's "big government socialism."


The Urban Coalition's Give a damn campaign.
Give a damn

The heart of the Lindsay Administration was in the dual notions of equality and true opportunity. The belief system was that it was better to try and fail than to not try. The ethos was framed in the simple slogan of the Urban Coalition: "Give a damn." And so even if the immediate impact was not obvious, even if the failures mounted up, the results transformed New York City and created the possibility of future success.

For the first time the City University undergraduate population began to reflect the emerging diversity of the city, and today, CUNY's wonderfully diverse system is one of the best in the world.

For the first time since the advent of the automobile the parks system became dedicated to quiet and clean air, and the parks system was celebrated as a jewel. Without that cultural shift the volunteer efforts which have restored the parks could not have begun.

After years of "post war" neglect in favor of highways, the Subway system was again viewed as vital and essential. Giuliani's "restoration" would not have happened if Lindsay hadn't preserved what was there, and focused attention on it. 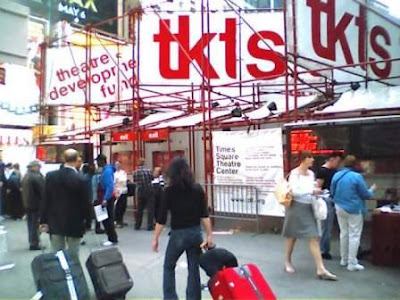 Cultural institutions became central to the life of the middle class in New York City. Museums flourished as the city embraced, first, The Museum Mile, and then other centers of culture. The TKTS booth on Times Square democratized theater audiences. Shakespeare appeared in The Park, the New York Philharmonic quickly followed.

And despite the many disasters (Ocean Hill/Brownsville and Frank Serpico being the top two), New Yorkers, for the first time, felt they had real input into their policing and education systems.

This matters 45 years later because we now live in an age when leaders spend more time telling us what is not possible than in trying to make our dreams into realities. We're told that Americans can't have a health care system as good as those in most similar nations. We're told that the best we can do is having a few good schools in a few states. We're told poverty is unsolvable - almost impossible to even make a dent in. We're told we can't have a real rail transport system. We have US Senators and Congressmembers who even tell us that we can not even put those who've killed Americans on trial.

On Twitter I listen daily as "educational reformers" prattle on about all we cannot do, we can only save a few kids, they say, so we'll segregate those few into Charter Life Boats while we watch the rest drown.

Everywhere in education I see people afraid to try, afraid even to run with great ideas which great teachers are proving in their classrooms. Brits can boycott dumb high stakes tests, but Americans are afraid. Few are willing to risk fighting the anti-child, anti-teacher tide flowing from Washington (and now from Westminster).

The New York Times correctly titled their exhibition review "You Can Fight City Hall." Because that is what the Lindsay Administration meant. It was a time and a mindset that said we need to aim for the best we can be, and if that doesn't work, we'll pick ourselves up and try again. 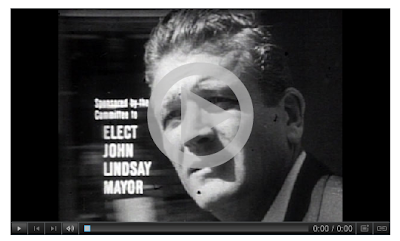 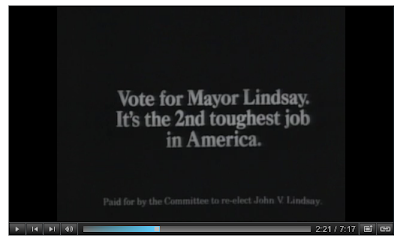 1969 Campaign or watch the full video
Watch these campaign ads, visit the virtual exhibits (or the real ones if in or around New York), and remind yourself of what risk in the name of good looks like for a society.

Maybe we can recapture just a bit of that.

Here's a little modern day example that supports what you are saying here. Thanks for always challenging assumptions.