When rethinking the school itself...

What happens if you really begin to rethink what your school looks like? No, I'm not talking about rethink from a wildly radical viewpoint - like mine or say, Neil Postman's - but just if a dedicated set of educators stops "tinkering" with little changes and wonders what school might be like...

In December Apple invited me to an 1:1 school computing "event" at Holland Christian High School in Holland, Michigan. I was initially a bit reluctant, Apple - in my "educational demonstration experience" - being one of those "hard sell" kind of firms which tolerates little dissent, and tends to make fun of you if you suggest alternatives to their "cool," but I went anyway. Doughnuts and coffee were promised, it wasn't far, and I wanted to meet Twitterpal @mrlosik who would be attending. Plus, Holland Christian interested me. In my work with students on Assistive Technology evals, few schools had been anywhere near as willing to try new things, to give "disabled" students new opportunities, or to be less "rule bound."

Three years ago when I recommended Google Calendar with mobile phone alerts to keep ADHD students on task, Holland Christian was the only area high school to go with the plan - the others - the public high schools - just said, "we don't allow phones." 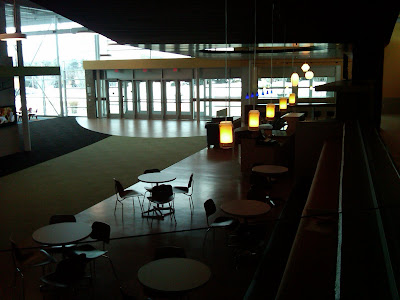 Anyway, I went. @endaguinan warned me from his socialist vacation home in north London that Apple reps would probably use the word "funnest" and I promised that if that happened, I'd leave and head for the pub to work. But I went, dodging a dangerously icy morning on the roads and on the school's outdoor paths. And when I walked in, I immediately began to be happy to be there. The school had physically been rebuilt in the past year, and now I entered a wide carpeted "Main Street" area filled with comfortable chairs, and beginning with a coffee shop at the near end and a glass walled library adjoining that, and ending with an open cafeteria at the far end, with a high tech auditorium in the center. Huge flat panel displays showed students at work throughout. Students moved through talking and chatting, but the noise control of the architecture turned it into a pleasant rumble. There were no big rules posted. "Adults" were there but not obviously "supervising."

Holland Christian decided a few years ago to become a 1:1 school. That alone is a huge step, but they realized that changing student tools was just one part of rethinking. And while they were rethinking, they realized that they needed to rebuild and reorganize - that new tools would only be meaningful if the educational environment altered in ways that let the tools really change things. So, after a brief and meaningless Apple introduction our day began as we listened to Glenn Vos, the school superintendent. Glenn didn't talk about Apple, or even 1:1 so much. He talked about rebuilding classrooms so there was no "front" anymore. He talked about wide hallways where students could gather. He talked about attendance policies which allowed students to sign into classes from elsewhere in the building if that made them more comfortable. He talked about multiple projection screens in every classroom to break "single focus learning." He talked about dropping text books for authentic materials and the acceptance of multiple - and student chosen - ways of demonstrating knowledge. He even talked about having big windows in classrooms both to the outside and the school corridors - "We're not hiding from the world or hiding the world from our students" he told us.

And then we listened to teachers and students, we wandered the building, and we saw. In newly built additions classroom doors were centered on one wall, projectors, aimed from the middle of the ceiling, pointed to two corners. Window walls opened outside, big windows allowed views to/from the halls. In most rooms the two projectors were in use, showing different things. In most rooms, students gathered in clusters, often passing tablet boards around.

Students described open-ended projects they worked on. Teachers described learning to trust student learning. Voss himself told me of needing to change staff thinking. "I wanted the library completely open," he said, "the librarian freaked out, so we put these pure glass walls up. She said, "they'll steal the books." I said, "Students will steal books! If they do that I'll buy you new ones." Then he said, "The books are decoration now, the kids all download digital versions of what they need." 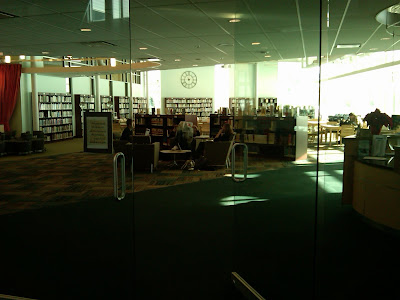 All in all what I saw was a 1:1 initiative that had been shaped by a commitment to rethinking school, and centering the form of school on what students need now - collaboration, access to and effective use of global information, trust in students, belief in leveraging the world of today rather than avoiding it, and universal design.

"Kids don't need a lot of special services," one staffer told me when I asked about special needs. "If they need stuff added to their computers, they find it and add it or we help them. If they have to do things differently, well, everybody does stuff differently. It doesn't matter."

The Apple stuff in the building was fine. The computers were cool. But there was nothing a school couldn't do with much cheaper Windows or even Linux laptops. They used free Open Office and many free webware programs. "There are ads there," a visitor commented about a class blog. "Yes," the teacher said, "we realize that our kids do see advertising in their lives, it's no big deal." This was no cost-be-damned private school experience. It was reasonable, it was logical, and it was technology chosen for education, not technology chosen for technology.

Maybe most importantly, they had tested and considered, and are continuing to do that. "Why no IWB's?" they were asked. "We tested them in a few classrooms," we were told. "They were expensive, they didn't seem to get used very interactively. We saw better stuff with two projectors and the wireless tablet controls." "What if mobile phones become dominant," I asked, "and laptops get outdated?" "The equipment really isn't important," was the answer, "we've learned to embrace the student control and interaction, and we'll keep doing that."

The day ended with a bizarre Apple rep presentation in which they suggested military school-like quizzing of students on the "ten reasons we have gone one to one." (No, I'm not kidding - Apple corporate culture has flipped since 1984) "We stop them in the halls in this one school and they can recite them all!" But that was just a strange addendum.

What I had seen that day in December was a school where rethinking was embraced, and it was wonderful to see.

Thank you for sharing this heartening report, Ira. For me, it's a perfect gift that offers a beacon of light and hope at the dawn of a new decade. Significant change is possible after all. --Paul

Ira, I am so glad to read this about Holland Christian. (Looked through the staff directory and recognized several individuals from my days at Calvin.)

What can we do to make it so public schools can have the freedom to "rethink school itself?" We know so many people who want to do so but are tied to boards who are afraid to look past budgets and assessments. Teachers work very hard to connect with students and offer them the tools they need to succeed, but the public defines success so narrowly, schools have little chance of success by those standards.

Thanks for sharing this experience. My school is heading in a similar direction with our new buildings. It is very exciting but change makes many teachers nervous.

Thanks for this great post. We're working piece by piece on changing our school culture to help re-image learning. We've worked with Apple for a few years now and your comments ring true on many levels. We're very happy with the hardware but in some of the PD the relentless focus on the value of using pages and numbers is a little much. Our staff much preferes the free software route.

Wow, great post - really gives me hope! Especially great to see this happening in Michigan. I wish more schools would try to build that trust and empower students to take control of their own learning, instead of pitting students and teachers against each other.

It's also nice to see a focus on providing students with great opportunities and influences instead of futilely attempting to protect students from the world.

Latest painfully unsurprising example: There's a school in California that briefly pulled all their dictionaries off the library shelves and now require all students to get parental permission before being granted access to one. Why? Because they contain a definition of oral sex. (As if students were even using those dictionaries when they can look up oral sex in 2 seconds online.)

I am the Media Specialist at Holland Christian High School and was unhappy when I read the paragraph about the use of books and the Media Center. I met with our Mr. Vos and he assured me that he was misquoted. The students at HC are reading the books in the MC. We have begun a book blog which has had over 200 student reviews added since November. Students are receiving instruction in using databases and reputable websites for researching as well as finding information in print resources in the M.C. I appreciated reading your comments about how our students are using their laptops but I also wanted to state that they also use resources from the Media Center and the MC website.

While I don't believe I misquoted anyone, I want to assure you and any readers that there were students in the library every time I passed by. It was clearly an active place. I did not see any students using physical books, or browsing for physical books while I was watching. They were all reading via their laptops, but that, of course, does not suggest that the use of physical books has vanished. Nor does it at all suggest that students are not utilizing and learning from your services.

Quite the contrary, the student research I saw that day was really well done work that showed tremendous information literacy.

I would imagine that Mr. Vos's quote included a bit of hyperbole. He was expressing, as I heard him, the shift he might be seeing away from ink-on-paper as the basic system of print communication. But that did not imply to me that Holland Christian students are reading less, but rather, the opposite.

Thanks for your additional comments and clarification.
LS