A few summers ago I sat in a class - for both masters level and doctoral students - on teaching international education. Many of the students were Michigan social studies teachers. It was a fascinating course taught by a brilliant professor, but it was also horribly revealing. The teachers really did not know that people in other nations might define "democracy" as something other than "majority rules." Most did not know how Canada selected its government. None knew much about America's imperial history - wars in the Philippines, occupations of Cuba, Haiti, the Dominican Republic, the seizure of Hawaii.

So I asked a question: How many teachers taught in schools where student council elections were held in a way other than "the American voting system"?

The response was, "How else would anyone vote?"

So I pulled out something which looked like this - vote counting in Ireland's Dail (parliamentary) election: 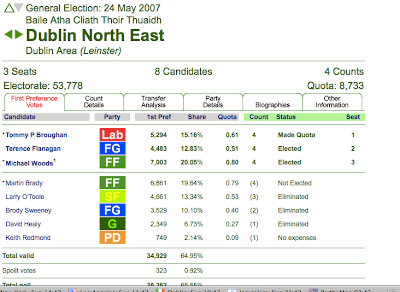 Americans, only knowing, only learning about, "first past the post" elections, are, logically baffled to learn that this isn't the only way. So this district in the north of Dublin elected three people to their parliament from three different parties. Drilling down in the analysis, it also suggests that about 96% of voters got one of their top choices elected. In other words, quite the opposite of America's gerrymandered, 49% angry, elections, this is "democracy" based in the idea of consensus. Then there is the role of smaller parties. In the US a protest vote usually is a vote for the candidate you like least. Ralph Nader voters in 2000 were voting for George W. Bush no matter what they say. But in Ireland you get to vote, say, Green, and select Labour as your second choice. If the Green candidate is eliminated because of too few votes, your second choice vote is counted instead, you haven't voted for Fianna Fail.

But if Ireland was too much, I asked if they understood how New York State votes. Of course, they did not know that either. 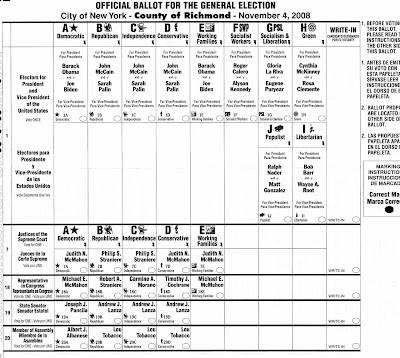 New York is a "first past the post" electoral system with single-member constituencies like most of America (we would call Ireland a "Single Transferable Vote" system with "multi-member constituencies"), but it is a multi-party system with "Fusion" voting: Candidates can run on multiple parties and their totals are added together. This theoretically allows voters to support a candidate but not a party. This has given great power to "smaller" New York parties throughout history. the Liberal Party, the Conservative Party, the Working Families Party.

Again, better or worse isn't the question, it is a different system. Just as a parliamentary system is fundamentally different than a "presidential" system, especially a Presidential system with a super powerful executive such as in the US, France, Russia, or Venezuela - all of which might be called "plebesceterial" (in the mind of Bush-era folks like Dick Cheney and John Yoo), in which the executive is, essentially, unchallengeable during his/her term.

I think our US students need to know these differences. Not just because they should know that they live in a society which has made certain choices, but because they will have to engage with the world in their lives. And they can not do that if they have no idea of how the rest of the world makes decisions.

We might even raise a generation which thinks about how they are governed, rather than which passively accepts their inheritance.