The course was fabulous on many levels. We had great history students in there, and a great professor. We could debate every event from "the big four perspectives" - British, French, Russian, German (my role being - until we got to 1933 - to present the German/Central European view) - and we didn't fall for the standard "causation" theories of simplistic history. But the best thing was the final assignment.

"I want you to do something," the professor said, "which demonstrates a real knowledge of some part of this period. Do whatever you want, and tell me your sources. Those are the only rules."

I wrote a short story. Well, really I wrote an unfinished novella, calling it off and handing it in at about 75 pages - which was deemed sufficient. My story was of a German Storm Trooper (think US Special Forces, not the later Nazi version) coming home from the front in the winter of 1918-1919. I made him a Czech, an Austrian citizen who had chosen to join the German Army. I placed his fiance in Munich, living with a relative during the war. This allowed my protagonist to travel by train from France to Hamburg, and then Hamburg to Munich. It allowed me to describe Germany at that moment of defeat. And in Munich it allowed me to bring him into the bizarre story of the short lived Bavarian Free Republic and its mercurial Marxist/Artist/Philosopher leader Kurt Eisner, which was the historical tale I wanted to tell. 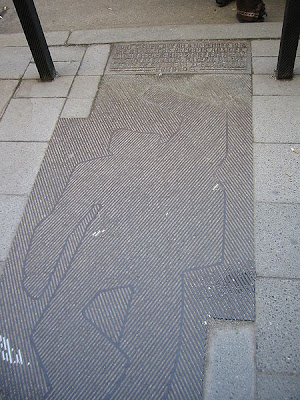 Eisner monument in Munich on the site of his assassination (Wikipedia)
Eisner was fascinating, since his primary pre-occupation seems to have been ensuring that new authors, playwrights, film-makers, and painters were supported - this being about democracy in art, not just government. He's historically important first because it was his government which released the "German War Guilt" telegrams between Berlin and Vienna from 1914, and more importantly, because the right-wing backlash against this leftist state turned Munich and Nuremberg into hotbeds of fascism and antisemitism. You've heard of Adolf Hitler, I presume.

The story may not have been perfect writing, but as a history lesson it was the very best. By creating a protagonist that had elements of myself in him - I too have some Czech ancestry - and it was written in the first person, I allowed myself to walk through this history. With each historic discovery I made in my research, be it the state of the German National Railroads at the end of the war, or a job offer in the Foreign Ministry of this bizarre little government seeking recognition as a separate nation by the victors, I had to push myself back in time and navigate the experience. Each step forced more research: Would I have been pro-Czech independence? Which city, Prague or Munich, would have been more appealing? Would German Army service have been accepted in Prague? Was Eisner really just following Bavaria's artistic history under the Wittelsbach dynasty? Why were Munich Marxists so different than many in Berlin?

This simple assignment turned me into an expert on this little known historic moment.

Others in the class wrote plays, made videos, one did a painting, there was a dance performance, and there were other stories, and even some "academic papers." Yes, it was all good. But let me focus on the historic fiction for the moment, because recently @bryanjack asked me - via Twitter - to help mentor one of his high school students regarding a historical fiction project.

I think that, for at least a large group of students, asking them - or allowing them - to merge their creativity with their emerging writing (or video) and historical research skills is one of the most powerful ways to teach history. As is the sharing of those projects - which bring these individual, or small group - zones of historic expertise together.

Think about this. Kids are already really good at projecting themselves into different worlds. They were great at it when they pretended to be knights in the Victorian era. They were great at recreating the "old west" or World War II in the 1950s and 1960s. Since the arrival of video games, these skills have actually accelerated, as everything from The Sims and Civilization to the "first person shooter" games is based in this projection skill.

They're not only good at it, they enjoy it.

But what we, as "educators," can add is reality. We can help them research and find the realities which will change the play into play plus real knowledge acquisition. Munich was still beautiful Munich in the winter of 1919 I discovered in my dive into this kind of fantasy, but it was often easier to find beer than many kinds of meats or the manufactured products that middle class Europeans were used to (the result of a British blockade that went on long after the fighting stopped). This didn't hurt the story I was telling, of course, it created whole parts of the story. Bringing home good soap was a wonderful romantic gift. Sausage was an extravagance, and the addition of meat meal to an evening out was important.

Your students, turned loose with their stories and their online search tools, will discover similar wonders around every corner. If you want to give them hints, and they are in Middle School or above, you might try a Thomas Mallon novel such as Aurora 7

or a Jack Finney novel like Time and Again

, both stunningly researched historical fiction pieces. There are fine Finney short stories which might work for students as well, such as some of those in his collection About Time: 12 Short Stories

. "What," you will be asking them, "did this author need to look for in order to tell this story?"

Just a suggestion, of course, but I see so much history made so boring in school, when, it seems to me, history is the greatest collection of stories - and kids love stories. So maybe it's worth a try.

Ira
Excellent post. The historical narrative is always so powerful.

Our 15year olds "adopt" a family and research their shared narratives via sources from 1896 to 1948.

We know we have empowered learners when they ask to "readopt" their families the following year to continue their narratives until 2001. Now to integrate the unit further and encourage more diverse presentations using #DERNSW.

Thanks for flying the history flag, not that THE best subject needs it!

Brilliant! Yes, yes! Kelly Gallagher talks about the power of fiction to help kids engage in imaginative rehearsal. You're right about the power of creating the characters and their world. I remember an assignment in my developmental psychology class to take a child character from a novel and write the rest of their life story with attention to what we had learned in class.

I think these kinds of assignments have another power you haven't mentioned--they help make students better people too.

I found this very interesting because we did something like this as coursework at school and to be honest, I had always thought it a little weak – I enjoyed it a great deal myself, but I went with the consensus at the time that it was a bit of a "soft assignment". However, in our case, it wasn't nearly so sophisticated; we had to give an account of the Treaty of Versailles from the point of a British Tommy, a French Politician and a German General. There were only really two ways to do it within a thousand words or so, one of which was cliché, the other of which might be seen as owing too much to hindsight.

But I was fourteen or fifteen at this point, and I knew that my great grandfather, to whom I had sometimes been compared, had joined up at my age to fight in the First World War, lying about his date of birth and had not been found out until he was at the front. Once discovered, he was sent to act as a dogsbody a drunken front-line doctor – you imagine the kid walking into hell! But I couldn't understand why anyone, anything like me, would want to join up to fight, kill people and risk death and suffering over an Archduke and some myths about murdered nuns in Belgian.

I think fiction has a vital role in understanding events like that, how people understood their own world and why they behaved as they did. Because although I always loved history, it was fairly late in the day that I realised that we're not actually better than people in the past – that we're not magically more intelligent, sensible or compassionate than people who made terrific mistakes or colluded in great evil. To me, that's the most important lesson of history and it's completely absent until you begin to see human beings behind the flat historical facts.

I think maybe when all the actual witnesses are gone, we need to create our own?

Great post. This merging of genres and content areas is what is true trans-disciplinary creativity. Note I didn't say inter-disciplinary which means existing at the intersections of different disciplines. Trans-disciplinary on the other hand is going beyond the disciplines to something more fundamental. In your example it has to do with developing empathy - critical for both history and writing, but deeper than each.

I have been engaged with something similar - writing poetry about science and math. It is a long story but you can see some examples and track how this ideas has flourished (thanks to the read/write web) here and here.