Today was a busy day on the Michigan State University campus. The "biggest" event was a football game (the American padded variety of football, where the ball is in play 13 minutes total) between Michigan State - whose most famous moment on "the gridiron" remains a 10-10 draw in 1966 - and the University of Michigan - a team best known for its rule and contract-breaking head coach.

We can laugh, but it is important to note that in a state so bankrupt it cannot afford to keep state offices open, and in a state with the highest public university tuitions on the planet, these two teams have spent more than a billion dollars in facilities upgrades these past few years. A billion dollars, or, eight times the amount needed to save promised "Promise" scholarships for Michigan university students.

So we know where our priorities are.

The big event for me was something different. I had signed up for a one-day Continental Philosophy Workshop - Technology, Time, and the Political: Modernity and Memory from Heidegger to Stiegler. A workshop important to both my Critical Studies Reading Group and to my dissertation topic. 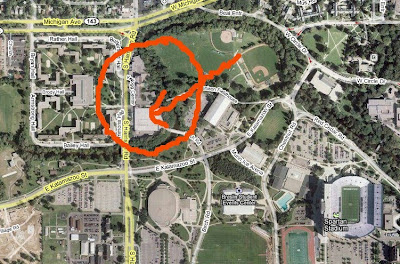 But today I was too disabled to attend the conference, though I drove 90 miles to campus for it (and, of course, 90 miles back).

Now, my physical condition has not changed since I was on campus on Thursday, but the "transaction space" had changed dramatically.

I arrived well in advance of the Conference's start time having been told, "Please use the Kellogg Center parking structure on Harrison and mention to the attendant that you attend the MSU philosophy workshop." But at the parking structure a hotel manager named Geoff Parkerson stopped me, telling me there was no space left for those attending the conference. He was letting cars in, but apparently a disabled grad student has no pull equal to guys wearing MSU football jerseys and driving Cadillac Escalades. Parking was in very short supply because MSU had turned over a large number of spaces to "tailgating" - drunk folks shouted down from their party tents as I sat there in my car, phoning both the Kellogg Center staff and the campus police, seeking a place that I could park and walk from.

Here's where this becomes a disability issue, and perhaps, an actual "federal case" (we'll see):

If I could walk "normally" I could have easily parked a bit more than a half mile away and walked. But because I cannot do that, MSU's arrangements for parking on this day prevented me from attending an important academic event. In other words, their parking arrangements and plans altered the "transaction space" in a way which crippled me - which prevented me from attending this conference in ways that other more "able-bodied" students could have.

Are there dozens of ways MSU could have easily solved this? Of course, from reserving spaces there to having remote spaces and shuttles - this is easy if the university cared at all. Could Mr. Parkerson have been polite and helpful instead of rude and clueless? No doubt. Might the university - one of the world's largest research institutions - have wanted to demonstrate that two events could happen on its campus on the same day? I would have thought so. But that's all besides the point.

Schools do this all the time. Today was just very personal.

I drove the 90 miles back home. I'll write my letter to the university president, and perhaps my complaint to the US Department of Education's Office of Civil Rights before the weekend is out.

I have to complain, or next week they may do the same thing to someone else.

The following is an extract from the uni president's statement on diversity and inclusion.

"At MSU we take great pride in our diversity. Valuing inclusion means providing all who live, learn and work at the university the opportunity to actively participate in a vibrant, intellectual community that offers a broad range of ideas and perspectives. To benefit from our campus’ diversity, we must embrace the opportunity to learn from each other."

You may wish to include it in your complaint!

Not having grown up in the US, I've always been baffled by academic institutions that place sports above all else. MSU just built a new "Football Center" a couple years ago. The building is certainly beautiful, though I've never seen anyone step into or out of it. Meanwhile, MSU's College of Education doesn't have it in the budget to print out handbooks for their student teachers anymore.

I hope you're able to force the attention of MSU's administration to something actually important.