SpaceFish and the Primary Crowdsource 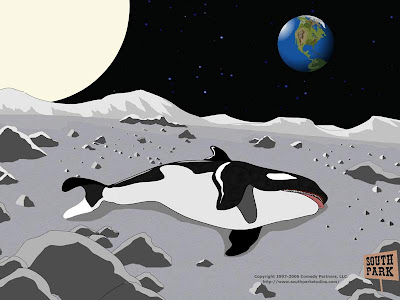 What place does social media have in the classroom?

What place does a teacher saying, "I don't know" have in the classroom?

What place does a teacher suggesting that we "ask the mob" to answer that unanswered question have in the classroom?

Welcome to "The SpaceFish Project"

Let's start here - with this Tweet from a class Twitter account at Colinton Primary School in Edinburgh, Scotland: "What would happen if you took a fish into space, would it float out of the water? Please help us with the answer because we don't know! (JG)6:53 AM Oct 8th from web" The teacher had allowed the children to crowdsource the issue. Put it "out there." See what they could discover.

It was quickly re-tweeted by someone in my network: "@tombarrett What would happen if you took a fish into space, would it float out of the water? Do you know of anyone that can help? (FB)7:12 AM Oct 8th from web in reply to tombarrett" and I and others attempted answers (mostly incorrect). But then I, intrigued, used a combination of my social networks to help find an answer.

View Larger Map
here's Colinton Primary School
I have an old friend who is a director at the New York Hall of Science. And we've worked on a few things together, and I've gotten to sort of know some of his staff - some of whom maintain the museum's public place on Twitter. So I re-sent this Tweet, linking it specifically to @nysci.

Very quickly we had answers, and links to the behavior of water (if not specifically fish) in zero gravity and in vacuums.

View Larger Map
here's The New York Hall of Science
And soon we had the possibility of American scientists dropping - via web-video technology - into a tiny Scottish primary school to talk to the students about science and space.

Well, they probably wouldn't be incredibly excited about science, space, or coming to school next week.

People ask me all the time if I'm "kidding" about wanting social networking tools in primary grades, and 1:1 computing, and mobile technologies. They simply can not imagine the value. In their primary classrooms the teachers talked, the kids listened, and this is what they know of education.

But at Colinton Primary School they have a better idea. And their kids are better off for it. What's going on in your kids' school?

'Primary Crowdsource' is a great coinage.

Here, Here, bravo, Ira. My primary students love asking questions and putting it out there. I'll be using Twitter as soon as our district unblocks access from my classroom.

A huge thanks to Ira, i've never seen my class so excited! Teachers shouldn't be afraid of using social networking in class but rather see it as a teaching point! From doing our SpaceFish tweet we had a great discussion on internet safety and the reliability of sources of information. Social media is not going away so rather than try to hide it from the children why not provide them with the skills to use it in a safe and informative way!

I have shared this post with my child's teacher. I'd like to see more of this kind of learning in our schools.

This was such a great story! I can't wait to share it with others. I am always asked how social networking can help educators and this is a perfect example!

This is such a great way of using Twitter. Essentially, no question is dumb, and I expecially like questions like this which have hidden depths. They can be answered at lots of different levels, and are often best answered by kids in primary school, who are less inhibited. The art of the 'thought experiment' is an underrated way of practising science, and should be encouraged. It might also be interesting to try sending this question to New Scientist for their Last Word column http://www.last-word.com/
Good luck
Paul (Twitter: @paulbrichardson)