Are You Dumber Than A First Grader?

Are you dumber than a first grader? This woman is

or, at least, she and her school board claim to be.

No, I'm sorry, after meeting Tuesday night the board and administration of Delaware's Christina School District decided that they were capable of considering the actions, motivations, and needs of five and six-year-old children - it is just anyone age seven-and-up that Dr. Marcia V. Lyles and crew can not figure out how to handle.

The Christina School District is the latest poster child for the need to wipe the entire idea of "Zero Tolerance" from our school vocabulary. They became this when they "zero tolerated" a first grader who had an awful lapse in judgment and brought an eating utensil to school to eat lunch with. Yes, zero tolerance policies make it easy on third-rate administrators like Lyles, and failed policy makers like the Christina board. They don't have to think, they don't have to consider, they don't have to make decisions or defend those decisions. Hell, with policies like this they don't even have to actually talk to children.

A Twitter friend wrote this morning, trying to consider why school board's adopt these kinds of policies, "We don't want to be discriminatory or irrational. Therefore, rules are enforced to promote equality." And while I understand the desire to not be discriminatory, or to be seen as discriminatory ("you only suspend black kids"), I struggle with the notion of promoting equality. 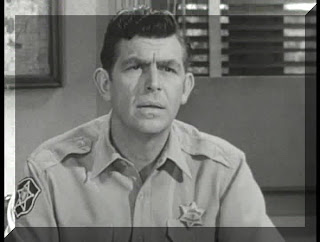 A few years ago, on TV-Land, I watched the pilot episode of The Andy Griffith Show. This was actually an episode of Danny Thomas's sitcom Make Room for Daddy, and in this "spinoff pilot" Danny and New York family are driving south to Florida when they are stopped for speeding in Mayberry (ah, life before interstates). Danny gets all huffy and doesn't want to pay the fine. He gets especially outraged when Andy fines him $100 after fining another motorist $5 for doing the same thing. "That's not fair!" Danny thunders.

And Andy tells him that $5 is a great deal of money to the man he fined $5. But $5 means nothing to Danny. And so it would not be fair if the fines were equal.

Just as today, one speeding ticket, with various state surcharges and the resulting rise in car insurance premiums can literally end up destroying a poor person's life (loss of ability to feed family that week, loss of ability to register car, thus loss of job), while the rich state legislators who determine these fines pay the charge without a care in the world.

I'm sorry, if you can not see that. If you can not judge how best to apply the law - or the rules - you have no business being a police officer, a judge, a teacher, a principal/headmaster/headteacher, a school superintendent, or a school board member.

Consider "zero tolerance" in your world. Everyone who jaywalks is ticketed. You run into the street chasing your toddler - get a ticket. Everyone who ever exceeds the speed limit gets a ticket. You go 36 mph in a 35 mph zone on your way to the Emergency Room and you pay a $100 fine. Everyone who makes a mistake at work gets laid off for 45 days (the Christina Schools' policy re: students). Sorry you forgot to file that report correctly. You can't pay the mortgage this month. Never a mitigating circumstance. Never a consideration for humanity. Never room for an honest mistake. Seems like a very unpleasant world to live in.

But yes, it would make life easier for the likes of Dr. Lyles.

Well, I've been a police officer and I teach, and I have never had "zero tolerance" policies. Everyone you run across represents a different situation and a different set of human conditions. To treat all the same - in every situation - is both gross injustice and the height of inequality.

And we simply can not let people that lazy, or - to express my honest opinion - that stupid, be in charge of laws, school rules, school assignments, etc.

In my classes I will often get an email like this: "I'm sorry I didn't get the assignment in on time, I had a family emergency and had to drive to Ohio over the weekend and..." A "zero tolerance" person would give them an F for the assignment. I say instead, "I hope everything is all right. Please get it to me when you can." And then I add, because these students are now or will be teachers, "Please do the same for your own students."

Because we are humans. And humans are supposed to be tolerant.

Apparently Dr. Lyles learned her style of education administration from the likes of NYC's own non-educator school chancellor Klein for whom she worked not that long ago. How nice to see that NYC idiocy is working its way through the country.

In the book "Traffic" which came out a couple of years ago there is mention of certain European countries that have sliding scale fines for traffic offenses based off of the personal income of the guilty party.

Thank you for your critique of the stupidity of zero tolerance policies.

Everyone who makes a mistake at work gets laid off for 45 days (the Christina Schools' policy re: students)

Is that true? What kind of mistake would qualify?