Wiping Yourself Out of History

Yes, I am old enough to remember the assassination of John Fitzgerald Kennedy. And yes, as with almost anyone who remembers that day I believe that remembering the event matters a great deal.

With that in mind, I joined in the creation of a Kennedy Assassination Resource Site for our schools, as we begin the modeling of how to collect digital resources, and as the 50th Anniversary of that Friday in Dallas approached.

But we had one recurring problem. We kept trying to link two critical YouTube video clips to the site: one of the interruption of the soap opera As the World Turns for the first CBS News bulletin, the other, legendary CBS News anchor Walter Cronkite wiping away tears as he confirmed the news of the President's death. Now, I saw neither of these "live." I was in school when, probably, both happened, and we were an "NBC News family" anyway, pretty firmly committed to getting our news from Chet Huntley and David Brinkley. And yet, in national memory, those CBS clips have prettu much defined getting that awful news that day.

"Three-quarters of the people in this country today are not old enough to remember the tragedy, but Baby Boomers forever will recite where they were and what they were doing when they got the news from Walter Cronkite," said the Boston Globe in an article about the National Football League's bizarre decision to play football games that weekend in 1963. CBS was the top rated television network (there were only three then), and CBS News was the most watched news source in the nation. Cronkite was so powerful that he is largely credited, five years later, with turning the majority of Americans against the Vietnam War.

So, we figured Cronkite and CBS were important parts of the story of that awful weekend. But CBS thought differently. Every time we tried to link to either of these videos the links would vanish, taken down because of "copyright claims by CBS," so eventually we gave up. What our students see is instead, my family's preference, NBC News. NBC (and ABC) aggressively embracing YouTube sharing.

Now eventually, on Sunday morning, November 24, 2013, CBS did post a contemporarily-edited version from CBS Sunday Morning to YouTube. But this is not the kind of source material we want our students to begin with. So CBS News and Cronkite are gone, and Huntley-Brinkley are in. In 20 years, if these policies remain the same, no one will write, "where they were and what they were doing when they got the news from Walter Cronkite," because Cronkite will have vanished from history, hidden from view by the CBS attitude toward copyright.

This is not just about the Kennedy assassination, of course. This is about the massive mistakes so many are making a decade or so after the Gutenberg Era ended.

"It is a sobering fact that some 90% of papers that have been published in academic journals are never cited. Indeed, as many as 50% of papers are never read by anyone other than their authors, referees and journal editors." notes an Indiana University researcher (PDF). To which my response is "duh." Hidden behind paywalls, limited to the research strategies of bored graduate students, it is clear that no one gives a damn about what you have written if you choose to severely limit your audience from the start.

My blog's statistical analysis suggests that more people have read my blog post - in one month - criticizing Dr. Richard Allington of the University of Tennessee at Knoxville than have probably read all the academic papers by all of Allington's grad students. My post being public, and their research being, not.

In fact, if I use Google Scholar to search for Allington's work, I find links to $25 books and $15 journal articles, and I'm not paying for either, and neither are teachers. I don't know, maybe he assigns his books so his students have to buy them. If I use "regular" Google I find a few "light" pieces available, alongside many costly ink-on-paper books. Again, sorry, no thanks.

Do you want to be part of the conversation or not? That is the question. Many, university faculty, grad students, the Authors Guild, the MPAA, the RIAA, would rather not be. In pursuit of pennies, they are actually seeking irrelevance.

These groups all think they are benefitting their "members," but that's obviously not true. They are all choosing to drive their audiences away. It is not even a tough prediction to suggest that university attendance will nose-dive over the next 20 years, better information than many post-secondary courses offer is available free and in much more engaging forms... That "film" and music distribution will look completely different in five years: Straight to YouTube has become the path for many of our most creative new musicians and film makers... That authors will be publishing free but making money via contribution and performance in less than five years: Free stuff to read is all over the internet, and its a much better collection than you'll buy at your local Barnes&Noble. This is neither "good" nor "bad," it is just inevitable. The distribution system of the 20th Century makes no sense to most anymore. It was clumsy and expensive and enriched the wrong people anyway. The copyright system of the 20th Century makes no sense anymore - it really never did make sense to protect a cartoon mouse as "intellectual property" for ten times as long as a life-changing medication. It also enriched the wrong people - corporations and attorneys rather than inventive minds. So both will go away, and soon.

So, you have your choice. Hide behind paywalls and attack lawyers, or share your works with the world. Be part of the global conversation or confine your thoughts to an increasingly irrelevant elite. 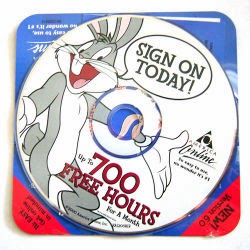 Figure out how to live via a culture of sharing and communication or sit back and imagine royalty checks rolling in.

But realize that the sides are forming now. CBS may eliminate itself from the understood history of global journalism in pursuit of a few cents. Just as the RIAA killed the music CD by charging $14 instead of $3 for that format in 2000. Just as university faculties sit back proudly as their work in "peer reviewed" journals gathers dust and has zero impact on anyone. And if you choose the wrong side you might become the next AOL - remember? They had this brilliant business model...