Humans are born different from one another. Anyone who has ever seen more than one new-born human should know this, though clearly, many do not. It is the magic of genetics, the constant search for new mixes that will push any species forward. You have to cheat nature to make multiple replicas, the "breeding" of animals, the genetic engineering of plants, and we know that when a "monoculture" is created, flexibility and adaptability fall off the scale.

When I was in third grade, so, eight-years-old, I could remember and work with all sorts of information, and I discovered that, when shown blueprints of a building, I could see it clearly in three dimensions in my head. I could read music, and play a decent horn. I could swim much better than most, though I'd never learn to skate like my father, nor grow as tall as him. And I really could not read at all, or make things recognizable as letters. 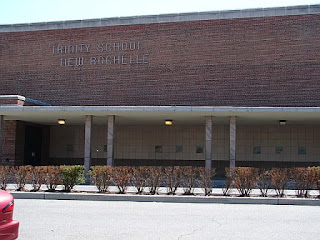 No one I knew, no one in the huge (160+) third grade at Trinity Elementary School, had the same exact skillset that I had. There were kids who were incredible readers, phenomenal baseball hitters, incredible musicians, who were faster than anyone on the playground, or who could turn a lump of clay up in the art room into beautiful things while most of us struggled to make ash trays as Christmas gifts for our parents.

This is important for the human future. There are a million plus different things which need to get done by the human race, and no one human can possibly do all those things well, so we - social animals that we are no matter what American Republicans claim - have vast differentiation as a species because no human ever really thrives, or even survives, alone. (The "survivalist" armed with all sorts of weapons which are the work of hundreds of thousands of others simply proves the point, as does the "bootstrap businessperson" who relies on an economic system and on an infrastructure which are the work of millions and millions of others.)

But there is a place where human diversity is considered something quite negative... that's in the traditional school, in the traditional classroom. In those places we assume that all humans are essentially the same, that they develop at the exact same pace, that they have the same skills - and should have the same skills. This is not just an assumption, it is the law in the United States and many other nations. It drives almost all educational policy coming from Washington, Westminster, Canberra, Ottawa. It is even "built in" in most spaces, where matching desks line up in matching rooms and matching schedules move children through matching days.

And it is time for us, as we head toward the middle of the 21st Century, to stop all this. It is time to dispense with age-based grades and grade-level-"expectations," time to rid ourselves of assignments where everyone works on the same thing much less in the same way, time to rid ourselves of time schedules which limit learning, time to move beyond "Universal Design" to learning studios where differentiated humans learning to live and work together.

We all understand how this works if we've ever been allowed into "natural" human learning and living situations. I've sat at summer barbecues and been the "lifeguard" because I could get to a struggling kid in the water faster than anyone else there. But someone else has the patience to keep the pig roasting. I am better at framing the walls than at hanging - or especially finishing - drywall. I'll help you learn how re-think your classroom, you help me learn to keep track of money. These are the trade offs upon which human society is built, upon which human survival is built, upon which the rise of humans to the top of the food chain are built. Why begin differently, we develop differently, we learn things at different rates, we help each other learn, and we take on differing tasks in life.

Does this suggest that we need no "common time"? Of course not. In the realm of humanness we need caves (for privacy and introspection), campfires (for collaboration), and watering holes (for communion). The gathering to eat and socialize is critical - and should never be rushed into the 15 or 20 minutes we often give schoolchildren for this activity. Funny, we constantly bemoan the loss of the Cleaver-style family dinner at home, but we have turned the act of eating together into school into a terrorizing rush.

Communion - the act of eating together while sharing - is the essential act
of human society
We need to eat together, sing together, play together, share constantly. The "Learning Studio" is a place where all this will happen continuously, and sort-of naturally. Where those ahead in one thing help those they can help, while getting help in things where others are ahead. Where we learn to use the tools we need to manipulate the world to our benefit. Where we learn to work well alone and together. Where we learn to be safe ourselves and how to make safe environments for others. Where we develop skills at our own rates.

This is so different from the standard graded classroom where at the very best, one-third of kids will almost always be bored, and one-third always be left behind. Or the classroom where kids compete for grades, or stickers, or approval, based on the way the teacher wants the kids to learn.

I'm not suggesting anything new. From the start educators knew that age-based grades, "required sameness" was a really bad idea, but then, as now, their understanding was over-ridden by the corporate desire (then Carnegie, now Gates, et al) put all children through an industrial stamping process. Michigan's Superintendent of Public Education wrote the following in 1901, you may want to read it, and then vow to change gears in 2012.

"Another question is that of grading and promoting pupils. Close grading assumes that every pupil can do nearly the same school work in the same time. We think we understand the normal five-year-old, six-year-old, seven-year-old, and know how much reading, numbers, language, science, etc., he ought to compass. Having arranged the course of study accordingly, we attempt to fit every pupil into it. But every teacher finds that pupils do not easily fit into these grades, and then begins a struggle distasteful to pupil and nerve-destroying, sometimes conscience-destroying, to teachers. The questions of aptitude, intellectual development, character-building, are made subservient to "making the grade." Then follows the inevitable cramming process, and the resulting destruction of originality, personality, and self-reliance—a devastation that never ought to be truthfully charged against any institution, much less an educational one.

"On the other hand, there are those pupils who by nature or because of environment have a grasp and comprehension that is far beyond that of the normal child. Such find the work too easy. They make no great efforts, and are thus defrauded of the best results of study. The easygoing work makes them easy-going pupils. They become indolent; they are put to sleep. In this manner many a brilliant intellect has been lost to the world. If it is an injury to the dull child to stretch him to the grade, it seems a crime to the brilliant one to cramp him into it.

"Thus there arises the mooted question as to what class of children should be made the basis of rigid grading. It would be well for us often to address ourselves to the question as to what makes the apparent difference in the mental powers of children, and as to whether there is much difference. If we do this we shall find some puzzling paradoxes; for instance, we shall find that many "dull.. pupils are mentally strong, and in their sports are often leaders; and that in those sports that demand quick thought and originality their minds often work with rapidity, accuracy, and great ingenuity. If we carry the investigation into the activities of life, we shall find many successful business men with minds vigorous and active, who confess with sadness that they "never could learn books." And sad it is; but in my opinion it would not be true, except that some one "blundered.."

"We are led to conclude that the so called difference in the mental power of the mass of pupils is usually apparent only. The average child is an average child. What seems dulness in some is usually ignorance of methods of study, while the so called "bright child" has simply adaptability. He, by intuition or practice, has learned how to attack a subject. His lesson, therefore, is easily mastered. He really makes much less mental effort than the sluggish pupil. What teacher cannot call to mind many "dull students" who later became excellent scholars? The explanation is not that by a miracle a better brain was supplied, but that the pupil accomplished the miracle of learning how to study. Indeed the one necessity in accomplishing the work of a course of study is really to teach pupils how to study."

Ira - can you give me the reference for the quote from the Michigan Superintendent of Public Education. I'd like to quote it in my defense of my new school proposal. Thank you.

Seth This link should get you to the start of the section http://books.google.com/books?id=Il7hAAAAMAAJ&pg=PA49#v=onepage&q&f=false the whole book is on Google Books