Back in 2008 I wrote a post about "Constructing Disability." I was writing from bed after a disastrous accident and week in hospital. That week gave me a lot of time to think, and I thought about my life, my education, and my role as an educator.

I wrote that we disable people, that we make people "less than fully human," by using a number of techniques:
1. Not bothering to know who you are.
2. Not really listening.
3. Assuming that "you" can't hear.
4. Infantilizing.
5. Making it look easy.

If the "scandals" at Pennsylvania State University seem to be an obsession of mine this week, please forgive me, but please understand that I see in the events in State College, Pennsylvania over the past two decades - and in the past week - too much that is too familiar in education. And, reading people's thoughts on this, and discussing them with "Penn Staters," who both tend to agree with me and tend not to, I find the parallels overwhelming.

And so, in need of processing by us all.

"I will start us off, (a Penn State student and survivor/victim of child sexual abuse wrote to the State College newspaper Sunday) because I have something unpopular to say. I see everywhere — in your editorials on your social media pages, in your subversively-written chalk messages printed all over campus — your desperate insistence that “We are still Penn State.”

"And each of these that I come upon creates in me a feeling of isolating sadness and emptiness. It reinforces in me what I have long felt -that the realities of victims and the realities of observers are worlds apart."

The "public piety" of the organized events at Penn State Friday and Saturday which so disturbed columnist Charles P. Pierce, "Watching everyone on the field take a knee before the Penn State-Nebraska game, and listening to the commentary about how devoutly everybody was praying for the victims at Penn State, was enough to get me reaching for a bucket and a Bible all at once."..."These things cannot be prayed away. Let us hear nothing about "closure" or about "moving on." And God help us, let us not hear a single mumbling word about how football can help the university "heal" (Lord, let the Alamo Bowl be an instrument of your peace.)," were so tone deaf, so cruel in many ways, and so obviously geared to demonstrating how quickly the institution could recover and students could get back to ranking themselves as "the number one party school in America," that, of course, a victim - even a non-connected victim like Bodenschatz - felt assaulted all over again.

Which is little different than what John Holt

found, as the 1950s ended, regarding his students who were "different." "I asked them, "Well, what kind of names do you hate to be called?" We were off. Before the end of the period the board was covered with names. About half were what I expected, the usual ten-year-old insults­ - idiot, stupid, nuthead, fat slob, chicken, dope, scaredy-cat, etc. The rest surprised me. They were all terms of endearment. It was quite a scene. There were all these bright-faced, lively children, eyes dancing with excitement and enthusiasm, seeing who could most strongly express their collective disgust for all the names that adults might suppose they like most. Someone would say, “Dearie-ug-g-g-g-gh!” Chorus of agreement. Someone else would say, "Honey-ic-c-c-c-ch!" More agreement. Every imagi­nable term of affection and endearment came in for its share. Not one was legitimate, not one was accepted. No­body said of any term, "Well, that's not too bad.""

In Holt's classroom he discovered that every adult attempt to "help" these students was really more of an attempt by the adults to help themselves - to support the self-image of the caregivers - and each of those attempts wounded the students.

Which is the issue, we need to look beyond ourselves if we are to be capable of empathy, but we are all too rarely willing to do that.

Two friends, Punya Mishra and Michael Faris, brought a short science fiction to my attention last night, The Ones Who Walk Away from Omelas (Variations on a theme by William James) by Ursula K. Le Guin. Now Punya writes: (see Michelle at Sans Serif and John Scalzi at Whatever for other blogs on this) 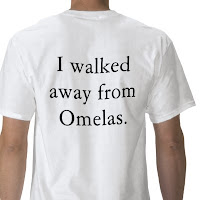 "It is about a beautiful city called Omelas, a city of happy people unburdened by any pain or sorrow. But this happiness is the result of a faustian bargain—a bargain where the happiness of all is dependent on having one child bear all the pain and sorrow of the entire city. This child lives in a dark, basement room, neglected and in constant pain. The story says that many people, though initially shocked, learn to accept this and seek to lead fruitful lives in Omelas. However, the story concludes that, there are always a few, who walk away, from the city, never to return. The story asks the question of whether it is, “right for the happiness of many to be built on pain and sorrow for one.”

I know that my synopsis does not do justice to the story. Do read it for yourself right here. Yes, right now. I can wait.
"OK. Welcome back. Now wasn’t that a great story. I truly think it is one of the greatest stories ever written (at lease one of the greatest I have ever read).

"So now coming back to the sorry state of affairs at Penn State. It seems to me that the Happy Valley in some sense struck a bargain similar to the one in the story. The entire football and university staff who knew or suspected what was going on chose to turn a blind eye to what was going on. The graduate assistant who stumbled upon the scene in the showers chose to let the child suffer to protect the good name of the program. The suffering of one child was worth it in exchange for maintaining the reputation of the football team or the University. The students who rioted after the firing of Joe Paterno were willing to make the same choice as well."

And I will argue that the students praying at Penn State's football game as others hugged the statue of Joe Paterno, were making the same choice as well. And further, I would argue that those working with students who "are different" without fighting to change a system which builds dependence and second-class humanity, are also making that choice. Whenever we choose what is easier for our system, our budget, our classroom, our effort, rather than what is right for kids, we make that choice (see, Not Getting to Universal Design).


"We too often consult our own convenience, rather than the comfort, welfare, or accommodation of our children," William A. Alcott wrote in 1831, so, none of this is particularly new, nor, as I have said, is it rare.

And at the same time, clearly with tacit approval from Barack Obama's Department of Homeland Security, mayors from New York to Oakland to Portland, great "liberal" cities, made the same choice, evicting citizens who were choosing to be uncomfortable as a way of highlighting unfairness from public spaces, because these scenes might have forced the wealthy and powerful to see that child locked away in Omelas. And most of us stood by. And no major figure even resigned, as at least someone in Britain did over the absurdity of this.

"But this isn't about you. It’s not even about me," Matt Bodenschatz wrote Sunday, "Until and unless you find a way to do something genuine, lasting and sincerely sympathetic for someone at the receiving end of these very real, crippling crimes in our headlines — even if you never get to meet them or to know any of their names — then your indignation is unearned and misplaced."

And this is the most true thing of all. We are either walking away from Omelas, or we are not. The only other option is to break down that door, free that child, and destroy Omelas as it exists.

Are we willing to do that?

"In Holt's classroom he discovered that every adult attempt to "help" these students was really more of an attempt by the adults to help themselves - to support the self-image of the caregivers - and each of those attempts wounded the students."

Give the man a gold star.

This is the central thesis of my Unified Theory of Sanctimony, which doesn't actually require a disabled person to function. We do it to each other all the time, but it's easier to see in the context of disability or difference.

Ira,
This is Matt Bodenschatz. I simply cannot thank you enough for your words here. I am struggling so hard. While people express support, they too often lack the understanding of exactly what I'm saying, and you capture it with conciseness and eloquence. I hope that you and I can talk further. I greatly need your help.

Almost all concern for so called victims is self serving. Most egregious the Do Gooder 2nd Mile ruse. The kids Need their biological fathers who if functioning properly would have been the protection to prevent the abuse.
no one talks about the collapse if men and fathering. No. More fun to have a golf fund raiser then to face the truth.