OK class, before we get to the Christmas Holiday it is time to read a literary classic. We're going to pick one absolutely relevant to the world's situation today, Charles Dickens' 1843 novella A Christmas Carol, one of the world's most famous ghost stories.


Today, I am watching as Mayor Bloomberg and his police commissioner Ray "Missile Boy" Kelly launch those they command in attacks on the pro-democracy demonstrators in lower Manhattan. This comes after a week of co-ordinated assaults by American governments on demonstrators seeking a fairer, more equitable, and more democratic societies across the country. Like the Assad government in Syria, the Obama Administration has little tolerance of this kind of upset, and these raids and assaults clearly have the support of the US Department of "Homeland Security."

Why the attacks? Well, CNN's mid-day anchor made it very clear Thursday. "People don't want to be inconvenienced," he said of the financial industry personnel who work around Wall Street. Right, "health?" "safety?" "cost?" No, those are excuses, the reason is, as Dickens made clear so long ago, that the rich simply do not want to look.


Dickens saw it all in 1843. He saw it right where #OccupyLondon sits threatened today, on the narrow streets of "The City" surrounding St. Paul's Cathedral. That's where Scrooge and Marley's offices sat. That's where early capitalists destroyed the fabric of British society in pursuit of personal wealth. And that's where the first Scrooges called on city authorities and the police to ensure that they did not see the problems they were causing. 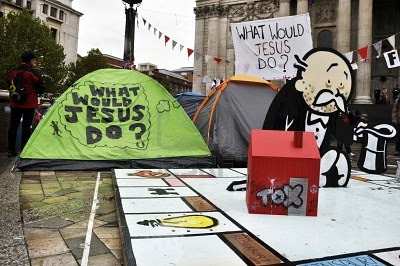 the conflict between capitalism and caring has lived around St. Paul's forever

In New York City this has also long been a familiar pattern. In the late 19th Century NYPD boss Thomas F. Byrnes was famous for his "dead line" along Fulton Street. The poor were prohibited from crossing that line because they might be thieves, or might otherwise trouble those of wealth and power. If you are interested in that, Jack Finney's fabulous book Time and Again

will offer you a remarkable view of that time. So, Ray Kelly, who I knew when he first became a captain in the NYPD,1 is just following in a role long established.

That role, which - I need to say in defense of rank-and-file NYPD officers - is not a favorite of any good cops, is to serve as a private army in defense of the comfort of the wealthy and powerful. Because I worked in Brooklyn and The Bronx, I had little connection to that role, but it has always been around. And this, of course,is hardly limited to New York and London. We've seen police in cities across America used - very clearly - for these purposes this week.


Dickens fully understood these power relationships, and this issue is embedded throughout this short and remarkable book. And, it is a story your students, of any age, can access. They can read it (in many accessible forms), of course, or they can watch it in many forms. My favorites being George C. Scott's version, Mr. Magoo's version (yes! "Razzleberry Dressing"), and Alistair Sim's version.

Now, I am not suggesting that you feed your students my socialist line of thought, but I think it is fully reasonable, "at this festive time of the year," to ask students if they see relevance in this story to the news of the world today?

I think it is long past time for our schools to stop being socially reproductive, to start preparing students who might decide to, and have the capability to, change the world for the better. In order to do that, we have to stop being afraid to ask our students the tough questions. And Occupy Wall Street, Occupy London, all the Occupy Movements, are asking tough questions, just as Dickens was in that Christmas of 1843.

So, let us bring Marley's Ghost to our Christmas season 2011. I truly think he'd have a great deal to say.

"I wear the chain I forged in life," replied the Ghost. "I made it link by link, and yard by yard; I girded it on of my own free will, and of my own free will I wore it. Is its pattern strange to you?...Or would you know," pursued the Ghost, "the weight and length of the strong coil you bear yourself? It was full as heavy and as long as this, seven Christmas Eves ago. You have laboured on it since. It is a ponderous chain!"

And, for your principal, just tell him, "my class is reading Dickens." Chances are, he or she will leave you alone.

1. When I first met Ray Kelly he was my C.O., brilliant, incredibly egotistical, a tad paranoid, but limited enough by his position to work with others. I am disappointed to see power corrupt.
Posted by irasocol at 11/17/2011 01:48:00 PM

I hate to break it to you, but this is one of the ways that literature is not transformative. :-)

Rich people see this story of Scrooge and assume that they can do good by giving to the poor, rather than upending their life and transforming the nature of capitalism. I mean, which task would you prefer? Give away some money or change the society in which you are successful?

I believe Scrooge is still around because it's a story of redemption for the rich. Scrooge is really the only character who changes in the story. The Cratchits benefit only through the change of Scrooge's attitude. The prevailing power structure remains in the end, even as Scrooge loosens up the purse strings a little bit.

What more could a capitalist want in a morality play about class and poverty? :-)

How about instead we splice this ending onto 'It's a Wonderful Life.' :-)

Homer (above) is, of course, correct. Dickens says right at the start this is a story of redemption, and it depends on a fear of hell, which Scrooge and Andrew Carnegie had, but Mike Bloomberg and Bill Gates do not.

So, yes, only Scrooge changes, though, to be fair, virtually all malice in the story - the full evils of capitalism - are placed within Scrooge. Even the thieves are far more moral...

Perhaps this is why I focused here on Marley, who is exceedingly blunt regarding his crimes - which were the pursuit of profit when he had far more important "business" to attend to. Marley does terrify Scrooge, as #OWS terrifies Bloomberg et al, but no, Marley cannot force the change.

This is a tale from the early days of capitalism, almost 170 years of crimes have followed its publication. Are we more moral now? or less? Do we know more now? or less?