SOS March: Why Barack Obama could not find One Hour for America's teachers 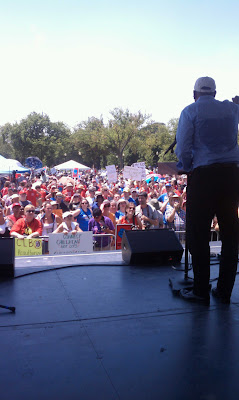 On July 18, 2011 US President Barack Obama found a few hours in his busy schedule to host an "education summit" to which no educators and no students were invited. Twelve days later, with the professor who led his administration's education transition team joining a huge throng of teachers, parents, students, and educational researchers in Lafayette Park across the street from where he lives and works, Barack Obama could not find an hour to sit down with those who live and work in America's schools. He could not find ten minutes to walk outside.

Why does the American President think it is more important to talk to the CEO of America OnLine about schools than America's teachers? 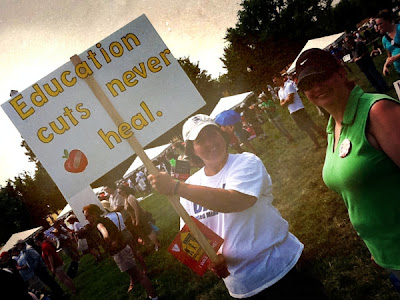 I do not think Barack Obama is an evil guy. Oh sure, we all pretended he was a lot more than the Chicago Machine Democrat he is, because we really wanted to believe. But no one is really surprised that he has not closed Guantanamo Bay or gotten the US out of Afghanistan - at best the US Democratic Party is somewhere to the right of David Cameron and far to the right of Angela Merkle, and the last time it was not, we thought Bobby Kennedy was going to be the next President.

Education though, education is a surprise. No one who watched the 2008 campaign could have really imagined that Obama was interested in education, or in reducing the impact of poverty of America's kids, but no one really thought he would be worse on these issues than George W. Bush either. And yet...

Obama began his administration by appointing his basketball playing buddy, Arne Duncan, to the position of Secretary of Education. Duncan, who has never worked in a school, but only been paid private industry-type salaries to tell public schools what to do, had accomplished essentially nothing as "CEO" of the Chicago Public Schools. In fact, the only student statistic to rise during his tenure was violent student deaths. This rise was a direct result of Duncan's "reform" policies. To "raise scores" Duncan would kick poor kids out of their neighborhood schools and replace those students with "whiter" kids. This forced tens of thousands of Chicago's poorest children to cross dangerous gangland boundaries every morning and afternoon. Too many didn't make it.

Now, Duncan's press secretary, Justin Hamilton, gets very upset if I bring the above up, which is odd, because Justin and Arne love statistics. But, well... I suppose I understand.

What I don't understand is Obama handing education in America over to this guy, no matter how good his jump shot is. Cronyism is all well and good, but it might have been nice if Obama had worried about our kids education as much as he worried about the education of his own. And if he hadn't bothered with that in December 2008, perhaps he might have looked out his window and had a moment of rethink in the three years hence.


"Anybody who does read the Darling-Hammond book--and Diane Ravitch's new book “The Death and Life of the Great American School System”--will get a full picture of how Obama and Duncan are off track with education reform and in danger of wasting billions of dollars on schemes that had already wasted billions in the George Bush era of No Child Left Behind.

"Darling-Hammond’s research, teaching, and policy work focus on issues of school restructuring, teacher quality and educational equity--and she knows as much about them as anyone in the country. These issues are central to any effort to create schools that really work.

"Still, when it came time to pick an education secretary, there appeared to be a campaign against her. She was falsely accused of supporting the status quo and blindly aligning with teachers unions.

"Whatever his reasons, Obama tapped Duncan, the superintendent of Chicago schools, who supported key elements of No Child Left Behind during his tenure there. As education secretary, he has disappointed many people who had hoped Obama would end the era of high-stakes standardized testing and punitive measures for schools that don’t meet artificial goals.

"Darling-Hammond’s book gives us an idea of where we could have been headed if she were in charge of the country's education policy."


Yet therein lies the problem. Barack Obama is not an evil guy, but he is not a guy who really cares either. Watching Obama on poverty, yes, but especially on education, one is forced to realize that all his community organizing, all his time in rough neighborhoods in New York and Chicago, were the kind of resume preparation all too common in the Teach for America cohort, rather than a genuine, Bobby Kennedy style, interest in discovering the "other America."

So, if giving education over to Wall Street turns on the spigots of campaign contributions, that is more important to him than the students who fill our classrooms. He doesn't actually wish these kids harm, not at all, he just doesn't perceive the lives of our children as a very important thing in his life.

Which is why he sat in the White House today, hoping John Boehner would call, rather than picking up his Blackberry, and walking outside.

Brilliant. And I didn't know about the violence in Chicago. Makes perfect sense, but so very sad. I'd be interested to see if there have been similar problems in other cities as a result of "reform," particularly in Los Angeles, where I live. Might be my research project for the day.

Brilliant Ira. I knew very little about Obama when I voted for him, but thought, he's not Bush. Turns out he's pretty close. Very sad.

Well done on an excellent post. You really pointed out some homes truths. Duncan's policies have been nothing but NCLB on speed. Pity..there was such hope.

I wonder what Oprah Winfrey thinks of Obama's educational "reforms"...didn't she endorse him while he was running for president? Hmmm, she is awfully quiet about the terrible situation teachers and students find themselves in now. And what would she say if asked about the violent student death statistics? Could someone do an interview with her and ask her what she thinks about endorsing Obama now?

And now you still wonder why our education system is failing...hum maybe someone should give someone a clue!

If I remember correctly, Oprah touted the movie "Waiting for Superman". Really ticked me off since she is always saying how much she loves teachers. I sent her an email pointing out the inaccuracies in the movie and suggested she host a show to discuss them. Never heard a word.

Our President's education policy was the reason I had considered NOT voting for him. And he's delivering exactly what he promised. Sadly, everyone was so focused on the wars we were involved in during the election that the ed policy was just a blip. Ironicly, when the president speaks on his own daughers' education it is the opposite of the policies he is pushing via Arne Duncan. My hope is that what he's really asking for is formative assessmment. If that's the case, that's what should be said.

Regarding Oprah, I think her heart is in the right place but she is misinformed. She wants to believe those who say poverty doesn't matter because she thinks poverty is an excuse for discriminating against minorities. She has been unusually silent on this lately. Perhaps someone with a little clout can talk to her. In light of all the cheating scandals and Jonah Edelman mess she may be more open to rethinking this. Getting Oprah to lend her voice in support of teachers would be huge.