Fictional Interlude: Who sat next to me in eighth grade

my rarely updatedfiction blog is here... 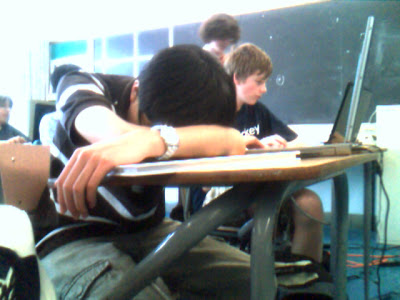 Stevie Sodoni in homeroom, adjoining names, assigned seats. Fell asleep within two minutes every morning and drooled on the desk. I'd say "here" for me and him and then try to get thrown out before the class could go any further.
Robert diNodo probably went through the whole year with a black and blue right arm. We shared this black-topped lab table in Science and Robert was an A student and all the tests were multiple choice which meant all I had to do was copy his answers but he was one of those kids who hunched over the page and wrapped his arms around it so you couldn't see so I would just punch him in the shoulder until he'd give up and move his arm and by that time I'd only have time to copy about half but still, it was one of my best classes.
In dumb English usually Danny Nally who laughed at everything, all the time, and who was always throwing things at me, especially books and I'd take it for awhile then, inevitably, retaliate, then I'd get in trouble but trouble was just getting sent to the Resource Room most of the time which was better than sitting in English.
Nobody in the Resource Room. There was this wide windowsill and I'd sit at the far end and just stare out the window and everybody would leave me alone because I had a reputation for hitting, and I really liked it there if it was raining.
Nobody in Gym or shop either. In shop they let me weld but they wouldn't let me have a torch I could walk around with: that would have been crazy. So they let me arc weld instead which made me feel like the god of hell fire and let them be sure I was tethered to the electrical apparatus.
At lunch me and Bill and Anthony and Jason were the first guys to cross from the boys side of the cafeteria to the girls side. The boys had benches at long tables and the girls had round tables and chairs and we started going over and sitting with Kelly and Jane and Mary Margaret and Wendy and they tried to stop us for a few weeks and other guys made fun of us but then they gave up and the other guys were just jealous.
Bobby Castore and I sat in the back of Mr. Hudson's Social Studies class by the window. Me, right by the window which was an issue but I held the seat the whole year. I skated by listening for almost five minutes every day, giving one answer, and seeming like I was trying. Bobby got by cause he somehow passed the quizzes. If it got boring we'd get thrown out together, skip out of the building if the weather was ok, and go drink beers we had stashed in the morning up on the hill behind the tennis courts. From the right spot we could see the water.
I only went to math once a week or so. If I was drunk from the last period I'd stay outside. If I wasn't I usually just went to the Resource Room, which was expected. If I went to class there was a desk way in the back corner where I sat by myself and drew pictures of stories I didn't know how to write down.
Eventually the bell would ring and I'd go to a team practice, or just down to where the tidal pools let me watch life on earth be renewed. That was better. 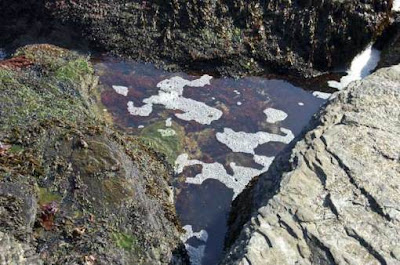 Eighth grade was a hell only surpassed by seventh grade. I've repressed most of those memories.

Loved the read. Didn't by any means read the cafeteria furniture in a Freudian way.

Tried to go to your fiction blog, but it's apparently blocked in Hong Kong or China or something. They must know you're an arch-capitalist-roader. (I'm in Shanghai right now, with a VPN connected to HK.)