Bill Gates is one of the most influential people in American education, by virtue of the way US leaders worship money. It is not by virtue of what he knows about education or his ability to imagine a future - and that is the critical issue.

Bill Gates has gotten incredibly rich, but it is essential to remember that neither he nor his company has ever invented or created anything. There were many people who imagined the Personal Computer, from IBM researchers to Steve Wozniak, but Bill Gates wasn't one of them. Gates did not even have the kind of vision which would have allowed him to see, in QDOS, something he could sell to his mother's friends at IBM, that was Paul Allen. All Gates brought to Microsoft were the accidents of birth - parental wealth and connections - which are the most important things in both American education and the American economy - but make one about as automatically reputable as Paris Hilton.

And Microsoft did not invent the office suite, that was a copy of the Smart Package and Lotus 1-2-3 of the early 1980s. They didn't invent the browser - they copied Netscape. They didn't invent Windows - they copied Apple. Today they are rushing to copy Google and Mozilla. Honestly, they are pretty damn good at copying, and sometimes even improving. But still, neither Gates nor Microsoft has ever invented or created anything new.

The fact is that Bill Gates' legacy to the American economy is the advice that the best thing you can do to get ahead is to start rich and copy the work of your smarter friends.

There are leaders who can see beyond "what is." But none of them sit at the heart of America's Orwellian "Education Reform" movement. Rather, the people determined to use education to maintain America's socio-economic status quo are like Eli Broad, who got rich by playing America's business game well - by buying other people's ideas, and paying people smarter than them less then they deserved, or people like Arne Duncan, who learned early on how to make big money off of taxpayers (you learn to do this when you grow up among "investment bankers" and others who don't pay taxes).

Now, there's nothing wrong with making money these ways, not legally anyway (at least Andrew Carnegie was afraid of hell), but this is probably not the kind of job we really want to prep most American kids for anyway - because for those who will do most of that kind of exploitive money-making, the Ivy League and its feeder academies do just fine.

What we want is a nation of problem-solvers, of inventors, creators, global citizens who can see a future beyond the next quarterly stock dividend.

And to do that we have to stop looking at the future of our children through the eyes which, say, missed the idea of the computer mouse and the problems of the housing bubble, and start looking to those who can help us 'visit Delphi' and imagine a future.

I'm not a mystic or a prophet, but some things are obvious to me when I look around. For example: the IWB - the "Interactive White Board"-Smartboard-Promethean Board - was history the moment touch screen computers and the Nintendo Wii appeared. You didn't need a crystal ball to understand that these technologies promised both more interaction and better interaction than the big white one-hand-at-a-time device bolted to the Teaching Wall as a reinforcement of the idea that classrooms have fronts. Yet schools continued - even now continue - to spend huge amounts of money to acquire these dinosaurs.

They continue to purchase IWBs not just because their leaders fail to see the future, but because the American education system is led by people who refuse to see the future. These people include Presidents like George W. Bush and Barack Obama, education secretaries like Rod Paige and Arne Duncan (both failed big city school leaders), and the leadership of the American Educational Research Association, which - to create an analogy - would have insisted that manned spaceflight was impossible until it had occurred. No "evidence-based research" you understand.


Augmented Reality Mirror, via Microsoft Kinect
or, if every student's handheld could also present (Samsung Android phone below) 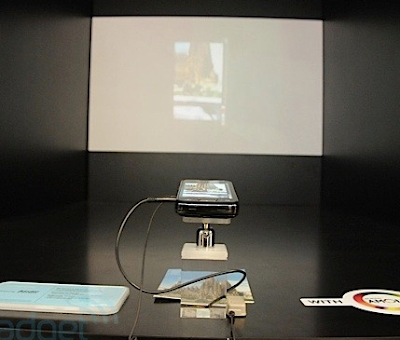 It is a refusal to see the future rooted in the worst habits of rationalism and scientific management. Performance has meaning, but when we insist on measuring performance alone we tie ourselves irretrievably to the past - for the future is not measurable. I cannot prove to the AERA that Kinect apps will change interactivity, or that phones yet to appear will transform learning, but both are obvious if we choose to look up.

Similarly, it seems almost impossible not to notice the dramatic shifts in the global workplace, in global knowledge creation, in global communication - at least the shifts which have occurred everywhere but the typical American school.

Information no longer has - OK, it never did have - anything to do with the "five paragraph essay" or the book report. Writing no longer involves hands holding pens. Reading takes many 'mechanical' forms - from decoding to listening to watching. Attention no longer means staring at a person in the front of the room. And work no longer always has set hours, set locations, or even set hierarchies. The publisher no longer defines cognitive authority, nor do the letters after one's name.

The future belongs to those who see beyond what they saw at last year's vendor fair. The future belongs to those to dream differently. Page and Brinn saw a search engine no longer tied to the 18th century idea of shelving books. The engineers at Xerox PARC saw a way to navigate a computer screen without a keyboard. They saw/dreamed these things because they were not locked into the "I know what I see" paradigm. Henry Ford's true genius lay neither in automotive engineering (he was copying many others), nor in the assembly line (which had long existed), but in two futurist ideas - that the automobile might completely replace the horse and that you must pay your workers enough to not just keep them around - but to make them customers.

If we do not bring this Delphic Vision to our schools, we will continue to prepare students for life in the year their school leader graduated from high school - which is all too often what we do now - or, at best, do what Bill Gates does, copy the best ideas of five years ago. Gates can copy Nintendo's Wii, for example, he can even improve it, but it is up to us to figure out what Kinect can do, because even Microsoft knows that it really cannot do that with the culture Gates created.

When I say I want our students to be creators, not consumers, I mean it. I want to "graduate" students who are capable of creating their own workplaces, their own learning habits, and most importantly, their own solutions to their problems and the problems of our world. But in order to do that we must allow ourselves to see beyond the past (which is what "the present" is endlessly becoming), and we must encourage our students - every day - to do the same. We must look to leaders who have created - not those who have copied others or manipulated wealth - and we must help our students investigate what separates a Sergei Brinn from a Bill Gates. What worldview leads one to imagine that which does not yet exist, and what worldview pushes the other to copy and acquire the existing.

We must create environments which support creation of the new. If our school design remains "the shelf" - rooms lined up according to age and/or pre-determined topic... If our school schedule remains "the shelf" - time lined up by topic and pre-determined function... If our assessment measures what we expect rather than what might be imagined... we are failing to see the future and we are - very literally - blinding our students.

And we need to stop doing that. So open your eyes. Really. Open your eyes, and bring your students to Delphi, where we can imagine a new world.