Experience another way to vote

This week students in the United States, Canada, and Great Britain have a chance to learn something significant about "democracy." That is, they can learn that not all nations think of democracy as "we" do, and that not all elections are won simply by "the person with the most votes." 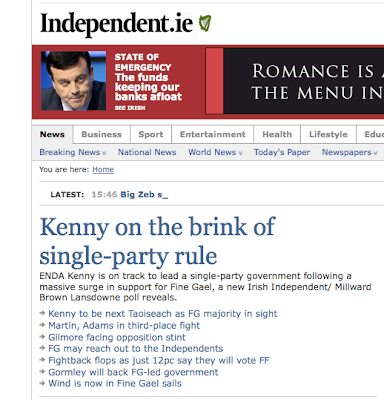 Next week the Republic of Ireland will hold a General Election for the 31st Dail, that nation's primary legislative body. And your classes can follow it all via news sources such as The Irish Times, The Irish Independent, The Irish Examiner, or RTE, as well as via the statistical record for elections - Elections Ireland.

Why watch what how a tiny (less than 4 million people) European nation votes? Because it will show students that the way things work in "their" nation is not inevitable - it is the result of choices, and definitions.

Of course, with a few exceptions, like Louisiana, "majority rule" in the US, Canada, or the UK, is "plurality rule." Candidates need not get a majority of votes to win. Thus, Canada is ruled by a right-wing government chosen by 37.65% of the voters in competition with four leftist parties, and the United Kingdom is led by a Prime Minister backed by 36.1% of the voters. France utilizes a "second round" of voting - the top two candidates in the first round meet unless someone has won a majority.

Now, an Irish student might not define "democracy" as "majority rules." In fact, they might say that democracy is protection of the minority - an important concept in Ireland.

Irish elections operate under a system called "Single Transferable Vote/Multi-Member Constituencies," and are, by design, protective of minority opinion. Each legislative district choices 3 to 5 members of the Dail. Each party may run several candidates within that district. And voters rank the candidates in order of preference on the ballot.

It is almost unheard of for any party to sweep a constituency. The most any party might expect would be to win 3 of 5 seats. Thus, while in American congressional districts many, sometimes 49% or more, feel unrepresented, and in Canada and Great Britain this often approaches two-thirds, in Ireland it is highly likely that someone you voted for was elected. Wicklow, above, elected representatives from three different parties in the last General Election, and over 40,000 out of 64,000 voters had their first choice elected. This might produce a much stronger feeling of having a real voice in government.

Wicklow is a kind of conservative place, and the top vote getters reflect that, both being from Fianna Fail, the dominant 20th Century party. But if you were a left-wing Labour Party voter, you had your woman in office. And if you were a Fine Gael voter, you are also represented.

The result has been many, many coalition governments over the years, with it increasingly difficult for one party to achieve a majority. These coalitions might tilt left or right, but tend to be less extreme in philosophy than a single party might be - like, say - US Congressional Republicans. That might either leave Ireland stable or slow-to-react, depending on your view.

(Coalition and collaboration often have a bad connotation in the United States, but I like to point out that the French Fourth Republic, much maligned for the instability of its left-center coalitions, rebuilt the nation's transport and university systems after World War II, introduced universal health care, and created the European peace we know today.)

This is a chance to compare, contrast, debate, wonder. What might your national government look like if chosen by the Irish system? Perhaps you could combine the five Congressional or Parliamentary districts/constituencies/ridings around your school and see what the total votes in the last election might indicate. Perhaps you could hold an election in your school using this system. Perhaps hold two votes for the same positions, one "the American way" and one "the Irish way" and see how the results differ.

Challenge your students to consider how changing voting systems might change democracy. Might change a nation and a society. After all, just because we have very old voting systems, need not suggest that we don't have choices (the UK will get a choice this year).

And then, follow the math (now we're interdisciplinary), watch the results flow at Elections Ireland, follow the math from Wikipedia. The Irish electoral count is slow and complicated, but that's OK, we don't all need results on Election night as CNN insists.

PR-STV is a complicated but very interesting electoral system. PR-STV is a system designed to enable minorities parties to have chance to get elected. Larger parties do tend to have a slight advantage due to the ability to put forward multiple candidates in elections.

See the links to explain it!

Fianna Fail (FF) have been the party in power for the majority of the history of the Irish State since 1926. They have been in power for 17 of the last twenty year. Due to the current economic mess, FF are expected to lose up to 50% of their seats. This could be a defining election in Irish history

Hi Ira,
I am visiting from Dr. Strange's EDM310 class at the University of South Alabama. I will be posting my thoughts on a couple of your blogs on
my blog later this month.
I really enjoyed this post. I love how you incorporated different subjects. I think it is so important for our students to know about the cultures and governments in other countries and the definition of democracy especially at a time when so many governments around the world are changing so drastically.
-Megan