On Saturday afternoon, as my good friend Paul gathered with his family in Connecticut, I went to the closest thing I could find to a dumpy New York area pizzeria in this frozen West Michigan tundra, and had a couple of slices and a Coke.

There was an essence of physical memory to be touched.

I can remember being fifteen. Fifteen? Yeah. Before a drivers license and the $100 1965 Corvair with the two-speed automatic (shifter on the dash) gave me wheeled mobility. I usually took the "M" bus up to the high school from the corner of North and Main, but I never rode it back. Instead I walked down North Avenue in New Rochelle, which the early French residents had called "The Middle Line." (Lacking a central river, French settlers needed to create an artificial divider from which "ribbon farms" could spread.)

I would walk and process the day, working through my world in a fully alone time. But usually I'd get hungry along the way, and often I'd stop at the G+G Pizza on New Rochelle's "bar strip" south of Iona College.

I'd order a slice of their incredibly oily pizza, blot up the grease with napkins, pour on the parmigiana cheese, and sit at a small table staring at the traffic outside.

Often I thought about things which Alan Shapiro had brought into my world.

Alan gave me a voice. I mean, I talked a lot before, but Alan Shapiro allowed me to find that my voice mattered, that people would hear what I said. He let me know that I could use my life experiences to help others if I figured out how to communicate. At a moment in my life when I knew I was going nowhere, this teacher held up a map of the universe and suddenly, there were possibilities.

But in those moments over pizza - then and now - I'd think about what I was doing through an "Alan" frame. Did it have value of some kind? Could I explain it? Could I take it another step in any - or many - directions? Was it always better to try, even if the result didn't seem likely? Could I bring others with me? How did I know what was said to me was "good information" or crap?

And if it was late, and the day had been hard, I'd work through those questions - about whatever - and I'd decide to keep going.

On this past Saturday, Alan's son emailed that Alan had woken up after a few days of being 'out of touch' and had recited this poem...

Into my heart on air that kills

INTO my heart on air that kills
From yon far country blows:
What are those blue remembered hills,
What spires, what farms are those?

That is the land of lost content,
I see it shining plain,
The happy highways where I went
And cannot come again.

He is dying, and quickly, or no, as he said to his grandson today, when his grandson said, "you don't have to fight it Papa," "I'm not fighting. I'm sailing."

It is an end as courageous and elegant and inspired as the life which preceeded it.

And I'm not sure I'd really get through this week, except that I am deep in the midst of doing Alan's work. 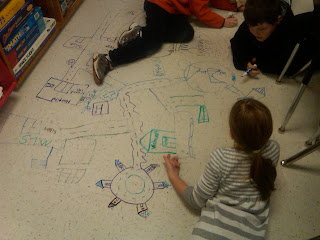 And so this week, as he lies in a Connecticut Hospital I am surrounded by educational magic in the making. I watch the kids in Mike Thornton's classroom free to discover as they study, free to not follow any lesson plan, free to not limit their learning to the state curriculum. I watch kids in Melissa Techman's library move through spaces now safe and flexible and redefinable by the kids to their own needs. I watch physical education teachers breaking down all the fears and barriers which beset so many kids. I watch high school students, liberated by an inspired teacher in a library-centered digital media lab, talk about discovering self-respect and even, yes, success in school, through following their passions.

And I know the value of teachers and the value of what those of us in education are trying - every day - to do. Not the faux value expressed in tonight's State of the Union ("nation builders" LOL), but with a real understanding that there is truly no job which is more important in any society. No job which deserves more real respect, and support, including job and economic security. No job we can invest in continuing education for which will help us as a world more.

Alan taught me many things, and one of them is the power of the teacher liberated to do their best for each individual student. The power to save lives, to give voice, to open opportunities, to allow imagination to soar, and to figure out how to be what you can be.

Many people bash teachers daily these days. Many always have. Fools like the current Governor of New Jersey and other politicians and commentators are nothing new. There are always meaningless people who seek to tear down those who have chosen to make their own lives important.

But listen to me. Barack Obama wants to turn your school into a cross between a Chinese Prison Camp and a badly run factory. He wants to stop you from doing what, if you look up from your test prep, you know your kids need you to do.

You've got nothing to lose. They'll blame you anyway. So let's just ignore "those" voices, and let's find our own.

I will honor him my way, and that is to be the most honest person I know how to be.

And I will continue to honor you, too, for you have insisted on no less from me. Last March when the DCFS investigator knocked loudly on my door, I was plenty scared.And you told me to blog about it. I thought that was plenty risky, but I realized that being open about these things is the best way to defuse them. And it was on account of you that I have not yet shied away from my painful truths and experiences.

Also because of you I will do what i can to encourage teachers to break rules and listen to their own still voices. The work continues.

Many of us owe you a debt of gratitude and also to your mentor, Alan Shapiro, once removed. We didn't know him, but on account of you we feel his influence.

My name is Brandin Brosh and I am a student in EDM310 at the University of South Alabama. I am an education major and I think that education is a gift and something that people should value. I like that part in your blog where you say, "Be the best educator you can be, and damn the rules, the common cores, and the mandates." Too often teachers get so caught up in what they are "required" to teach instead of teaching what should be taught and what is important. If every educator strived to be the best educator possible our education system wouldn't be the way it is today.

I hope Alan Shapiro gets well soon. We need all of the good educators that we can get.

I have been assigned to follow your blog for one month and after the month is up I will be writing a blog on what I have learned.
You can follow my blog at broshbrandinedm310.blogspot.com
Our class blog is
edm310@blogspot.com
Also I am new to Twitter and still trying to understand everything on there but my Twitter address is @brandinmb

Thank you, Ira, for honoring Alan from your own path in which Alan was a guide. Alan is a spiritual father for me and a light on my own path as a journalist and social critic concerned with human rights. I carry him with me in spirit everywhere I go -- most recently, Sudan. Even when I've disagreed with him, allowing myself to place some hope on the Obama campaign at a time when Alan had given up all hope for electoral politics, even then Alan's fierce intellectual independence lit the edge of my path. I am, by the way, his ex-son-in-law. He says "Forget the ex." I love him.
David Morse

Does anyone have an update on Alan's condition? I didn't even know he was ill. I just got an e-mail from 3i classmate Carl David Birman saying that he passed away, and found this blog with a Google search. I was graduated from the 3i program in 1980 and am still in contact with a few old friends from there. Of course, I hope for the best for Alan.

I am very late to this post, Ira. I don't know if you remember me, but I was in the 3i's and did an internship "teaching" art at Trinity with you. Your mom was a great person! I just discovered the FB 3I's page and on it saw of the death of Alan Shapiro. He was a great man. I'll never forget the big meltdown over someone wanting to use "fuck" in the 3I newspaper. He made us all sit down and decide how we would use "fuck" - was it a noun, a verb, an adverb? He said we could use it but only in one context. It was a great learning experience. Hope you are well and thank you again for this wonderful tribute to him. Loretta Benedetto (Marvel)