I raise this because of this quote: "New buildings are nice, but when they're run by the same people who've given us a 50 percent dropout rate, they're a big waste of taxpayer money," said Ben Austin, executive director of Parent Revolution who sits on the California Board of Education. "Parents aren't fooled." about this school... 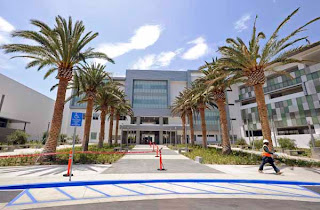 Or, as I might point out, just over than one-third the cost of the new Cowboys Stadium in Texas (used about 20 days per year) or less than one third the cost of the New Meadowlands Stadium in New York/New Jersey (used about 40 days per year). About the same cost as the George W. Bush Presidential Center at Southern Methodist University. Or, to be completely fair, for a bit less per person than the average Los Angeles price for a one bedroom home in the poorest part of that city.

Wow: Imagine wasting that kind of cash on our children.


Just a note about "Parent Revolution" - it is an "astroturf" (fake grass roots) "educational reform" organization primarily financed and coordinated by two charter school operating companies. It solicits contributions but won't even divulge who is on their board of directors.

My argument here will surely not be that the LAUSD does not need to do many things to improve their schools - starting with the State of California admitting that their "Reagan [tax] Revolution" has inevitably moved the state from the forefront of US education to someplace near the bottom. My argument is, instead, that schools - the facilities themselves - really matter. (see this old post, and this one)

Listen, my alternative high school was located within the RFK Community School of its time. An educational "Taj Mahal." New Rochelle High School has a planetarium, multiple auditoriums and performing arts practice rooms, an accredited museum, one of the most extravagant voc ed facilities ever built. A magnificent library, almost every conceivable bell and whistle, and it is beautiful - with extravagant architecture from 1923 to 2008. 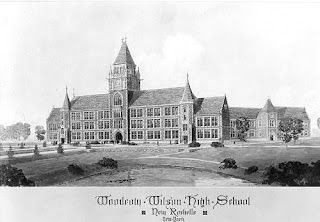 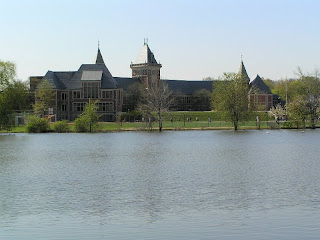 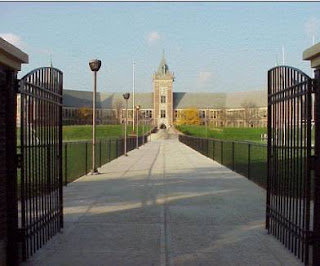 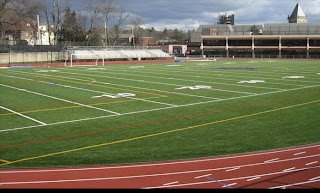 And I am here to tell you that architecture matters. Walk toward that front door, and you knew you were coming to someplace important, someplace the community prized. Even if your inclination was to hate school, as mine was, the act of approaching and entering beneath that main tower was ennobling. Having the space and facilities to offer kids options makes a huge difference too. You may not have loved math class, but you had your orchestra space, art studios, planetarium, nursing school, auto paint shop, pool, wrestling room, theatre lighting booth - whatever - to make your day both your own and "OK." Inspiring matters as well. You could lie on the lawn which topped the front-side library, the towers of the building behind you, the lake and park in front of you, and your brain put things together, even if you were not in class.

It was hard to feel like a prisoner there. It was hard not to have a certain true pride in your school. It was even hard to be completely bored all day. If you made even reasonably intelligent course choices, you had to have good moments.. 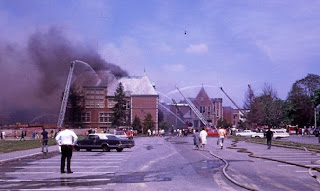 And The City of New Rochelle spent massively on this structure. Massively and repeatedly. Including choosing to reconstruct the original architecture after a devastating 1968 fire, as well as recladding the ugly 1950s additions during this century, in order to beautify the facility.

I'm convinced that this facility has been one prime reason that NRHS, a highly diverse urban school (New Rochelle has only one public high school, about 75,000 people live in the ten square mile city, it has a very large immigrant population), has kept itself among the top of the achievement heap in New York State over the past ninety years. (of course the district also has a very strong, engaged, teachers union - so that could be part of it too)


View Larger Map
it's not all "Rob Petrie" and Ragtime

in New Rochelle
So often we send our kids to school in concrete block bunkers, or collapsing old buildings, or uninspiring copies of 1956 factories. So often we tolerate, in our learning spaces, conditions we would not accept in our homes, in our restaurants, in our stores - much less our offices. So often we apply bizarre, twisted financial mis-information to our educational systems (if "the private sector" says it costs an average of $26,273 (US) to keep a student in class 15 hours per week, 32 weeks per year, what should we be spending to keep K-12 kids in school 35 hours per week, 40 weeks per year, plus transportation and special needs costs?). And it is time to stop all of that.

If education matters to us, as a society, we will make that apparent. We will spend what we need to. We will give our children great places to learn in. We will give them the technologies of our age. We will spend money to support continuous teacher learning. And we'll stop trying to get by on the cheap.

Thank you, your blog post is hit the nail on the head. So many time cities and towns demolish sports stadiums or entertainment centers just to build more modern state of the art structures. The building of these structures barely raises an eye brow. When proposals are made for new school buildings, state of the art equipment, or better instructional materials it is debated and talked about until its death. Some have the mindset what was good enough for me should be good enough for todays students. Thinking like this we would never have sent anyone to the moon, had vaccines developed, or modern technologies to help us. Thank you again for sharing your blog. kmb211

It is not just your side of the pond... over here in the UK our 'leaders' have just scrapped the "Building Schools for The Future Programme". What was our Minister For Education's replacement strategy? Why, anyone can open up their own 'Academy' in a disused church or similar building. As Anonymous said "Spending money on education? SHAAAAAME!" The worry over here is that because our 'leaders' all went to private schools ( mostly Eton) they don't see the point of renovating/renewing the public stock. Indeed up until the BSF project began we still had primary schools with outside toilets- a legacy of our great Victorian program building schools for the 19th Century