Barack Obama's Belief in the Least

On National Public Radio's Talk of the Nation on Thursday the topic was "How have discussions about race changed?"and Leonard Pitts, Pulitzer Prize winning columnist for the Miami Herald, said this:


"I actually want to go back to something that Mr. Gergen said because I think he touched on something very important. He was talking about the fact that so many people take it for granted that African-American and Latino kids are ineducable, and that this feeling persists, even in the light of empirical proof that this is wrong. I think when he says that, what he does is he hits on sort of a very fundamental truth about why we still have trouble with race in this country. We tend to make our decisions and tend to base our perceptions on caricature, which is impervious to fact.

"I've been writing in my column recently, about the drug war and about the fact that the overwhelming majority of drug users and drug dealers in this country, statistically, are white. And it is so difficult to get that past peoples filters, because in our minds and the popular imagination the, quote, unquote, drug user and drug dealer are some black kids on a corner in Baltimore.

"That's not the common - or the most common picture. But we have these caricatures, these, sort of, narratives in our head that we are absolutely stuck on and invested in. And we got to get beyond those before were going to make any kind of progress."

"so many people take it for granted that African-American and Latino kids are ineducable, and that this feeling persists, even in the light of empirical proof that this is wrong"

I listened to this the day after the Obama Administration announced its Educational Innovation ("I3") grants, and after I spent the day working - albeit remotely - with the principals of the Albemarle County Public Schools on expanding access to learning.

The winners of the "innovation" grant program: Teach for America - which provides untrained teachers for America's most vulnerable minority students while pumping up the resumes of rich kids; KIPP Schools - today's recreation of the US "Indian School" program for the "retraining" of minority children; and Success for All - a scripted reading program devoted to teaching reading as a skill, not a life function;  all have a few things in common, from campaign contributions to rich folks behind them, but especially, that they are all emblematic of the Obama Administration's belief "that African-American and Latino kids are ineducable." 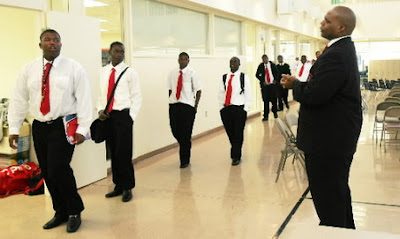 We can't, of course, be surprised. After the British election American friends were stunned that Liberal Democrat leader Nick Clegg would make a deal with the Conservatives, who after all, differed from the Lib Dems on every policy position. I had to point out that "class trumps all," and that Clegg and David Cameron went to the same schools, grew up in the same social class. There's nothing in Clegg's life experience or education to connect him to any other social class than that which he shares with the Tories.


"Obama suffers from a cultural class myopia. He's a patsy for "glittering institutions that signified great achievement for a certain class of ambitious Americans." In his books, he downplayed the more elite parts of his own resume—the prep school Punahou in Hawaii, Columbia, and Harvard—but he is nonetheless a true believer in "the idea that top-drawer professionals had gone through a fair sorting process" as he had. And so, Alter writes, he "surrounded himself with the best credentialed, most brilliant policy mandarins he could find, even if almost none of them knew anything about what it was like to work in small business, manufacturing, real estate, or other parts of the real economy." Especially education." [italics are from Ohanian]

I listened to candidate Barack Obama speak in "The Circle" of Michigan State University's old campus in September 2008 and he told the students there that he had been "lucky" as they had been. "Lucky" to have this opportunity to attend a great institution of learning. And I loved that. Those of us who have had the chance are lucky. We are not "better," for the most part, we've had better chances.

But deep down Obama doesn't know that. He still sees himself working incredibly hard for his chances - which, yes, is true if you compare his life story to his presidential predecessor's - but he forgets that when he was woken up very early to do schoolwork with his mother, he was being tutored by one of the most brilliant and highly educated women in America. That he was surrounded by educated family. That he was off to an elite prep school when the bell rang. Even that he was living in a place where his mixed race status was much less an impediment to success than it might have been in many other places in 1970s America.

He only remembers his own effort. And that is all he sees when he "listens" about education. He assumes that the Ivy League (or Johns Hopkins) elites have "risen to the top" because they are the "best" - when, in fact, they are often simply the "luckiest."

The inevitable - essentially unavoidable - philosophical flip side of this is that non-Ivy Leaguers, non-elites, are less intelligent, that, in America's mythic Horatio Alger belief system - if you are poor it is because you are lazy and less worthy.

So, in Obama's world, those "African-American and Latino kids are ineducable." Thus they won't get fully trained teachers. They won't get the arts and music and creativity that Michelle Rhee thinks they don't deserve. They won't get tech-supported access to literature or reading for fun or reading for the information they're interested in. They'll get the scripted drill and kill teaching methods the United States has always used for kids society has determined have no chance to move ahead. They'll get the abusive colonialism of white role models and training in how to be white - which, I'm sorry President Obama, is NOT the only way.

In Virginia yesterday we were trying something different. In a diverse - racially and economically - school district we were hunting for the best ways to give it "all" to every kid. To find ways to let "everyone into the club." We were working on how to increase the training and skills of an already highly-trained teaching staff. We were looking for ways to add flexibility and student-centered learning to all phases of education. And everyone in the room was committed, equally, to every student. Of course this district's innovation grant applications were not funded.

Listen: I campaigned for Barack Obama. I voted, with delight, for Barack Obama. I appreciate what he's done for America in many ways. And Barack Obama has me in a bind. Can I really vote the other way in America when the only other choice is a political party so right-wing extreme it would be banned in most other "NATO" nations?

But Barack Obama is hurting America's most vulnerable school children because, in his heart, he does not see them as his equal, he does not believe in their potential. And that is a terrible, terrible thing.


Way back in 1969 there was a series of television ads: "In the "Give a Damn" campaign for the New York Urban Coalition, a black narrator suggests to white viewers: "Send your kid to a ghetto for the summer. Want to see the pool? C'mon. The kids clog up the sewer with garbage, open a hydrant . . . You don't want your kids to play here this summer? Then don't expect ours to."

Well, 41 summers later, Barack Obama, if you wouldn't send your children to a KIPP Academy. If you wouldn't accept an untrained teacher for your daughters. If you wouldn't want your kids - if faced with a learning problem - to be read a script which disregards their needs. Then don't send our kids to these schools either.

Email ThisBlogThis!Share to TwitterShare to FacebookShare to Pinterest
Labels: Barack Obama, kipp, success for all, teach for america

Obama is a politician; so is Duncan. They both have their ears glued to the speakers of the money folks, which are not, as you know, teachers or poor students.

Change must come from the teachers. That's currently difficult because the teacher leadership, unions and academics, are mostly echoing what the folks with money are saying.

I think you are conflating two different parts of Obama's life. He was woken up early and tutored by his mother when they both lived in Indonesia. He went to the elite Hawaii school while living with his grandparents in Honolulu.

Also, Susan O has no apostrophe in her name - it is Susan Ohanian.

I'd argue that change must come from a teacher-student revolt against these policies which are destroying public schools and the lives of children.

I'm sorry you got so little out of this piece. But thanks, I corrected the spelling of the name. As for your first claim, in Indonesia Barack Obama went to an exclusive prep school, as he did in Hawaii, so I'm unsure of your issue.

I agree that change will ultimately come from teacher-student revolt.
I'd add one other party: parent revolt

thanks for this post- I learn much from you.

for some reason I too have been under the assumption that obama came from the other side of the tracks. that he conquered what kids have given up on today=hope for a better life and education

You're right, of course, that students (and parents) need to be part of the revolt. It's just that I see students, and to a lesser extent, parents, as not caring too much about the existence of public education as we know it or wish it too be; they'll just learn from some other authority as they're doing now in Afghanistan.

As you know, if we allow the folks that want to destroy public education in the U.S. to succeed, we're going to have a very difficult time re-creating it.

I'll add, students are very clearly already saying with the money they're spending how they want to learn. Not too many of them are banding together to rent space in an old building and agreeing to stay there all day, even when there's more interesting things to do outside.

I had the same initial reaction when I knew so many passionate groups across the country that had so much potential to be catalysts for real change were passed over. Your concise summary of the problem is well executed.

I do wonder, though if it is less about the "uneductable" as much as a well-intentioned but misguided belief that the problem the poor face is lack of "basic skills." Even some rather innovative groups seem to think that their work is a layer on top of the "core" and students who struggle never get the opportunity to develop thinking skills.

As a teacher who has spent three years in some of California's most troubled schools, I firmly believe that although all children are educable, many choose (along with their parents, if any, their peers, and their "community") not to be educated.

In trying to serve students who are in the latter category, we have a choice to make: to use forcing mechanisms like strict discipline policies and scripted curricula, or to allow the students to undermine the institution of public education with their bad behavior and their rejection of culture and knowledge.

I believe that there is a third choice: stopping compulsory schooling at the end of Grade 8. After a few years of minimum wage work -- or, for some, crime -- these hooligans would come willingly to adult school classes to complete high school diplomas.