"Thus, the Carnegie Foundation for the Advancement of Teaching encouraged the adoption of what came to be known as the Carnegie unit, which equates seat-time with learning. Each unit represented about 130 instructional hours. The Carnegie Foundation defined a unit as a course that met for a period each school day for about 50 to 55 minutes. The Carnegie unit continues to influence much that is crucial to teaching and learning in high schools–the length of the class period, the school day and the school year, as well as the time expended to receive a diploma." - StateUniversity.com 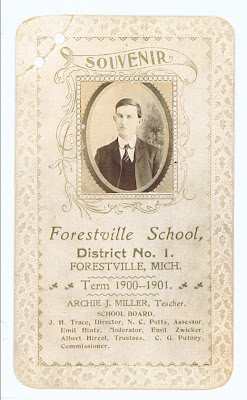 Does "time in seat" equal learning? Few have ever been sure, and I need to say, those who spurred the development of Carnegie Units between 1885 and 1915 were not sure.

Sitting in a chair and staring straight ahead is learning. The more we do do that, the more we learn. If that seems to be the underlying theory in your school, it is neither an accident of history nor a natural development. Rather, it is the result of a deliberate set of decisions made by business and educational leaders beginning about 120 years ago.

Back at the turn of the last century The Carnegie Foundation took standardization seriously. America's education system was already an oddly configured one, funded and operated locally - usually very locally - in often tiny school districts operating according to the cultural norms of wildly disparate population groups: America never quite embracing "nation" status within (a "single people") no matter how much "America" looked like an "idea" from abroad. As vast the differences which might lie between educational aspirations in Cornwall, Newcastle, and London (in England - which remained America's cultural model), or Bonn, Konigsberg, and Berlin (in Prussia - which was perceived as the model of modernity and efficiency), they paled beside the differences separating Salt Lake, Montgomery, and Boston - much less the thousands of miniscule towns hosting one-room schoolhouses across the vast North American continent. 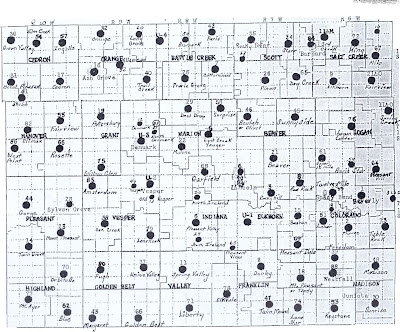 Schoolhouses in Lincoln County, Kansas circa 1900
So for more than half a century, since the 1840s, the US had wrestled with the problem: They wanted the Prussian model - an efficient, universal, education system which would both knit a diverse "empire" together (as in historically separate and religiously diverse "Germany") and properly prepare the lower classes for compliant citizenship and labor - but - they lacked the central control authorities of European nations.

If schools were to develop American citizens and workers and, in Jefferson's theories, discover who was deserving of publicly funded advanced training, could all decisions really be left to local school boards?

"A bill for the more general diffusion of learning... proposed to divide every county into wards of five or six miles square;... to establish in each ward a free school for reading, writing and common arithmetic; to provide for the annual selection of the best subjects from these schools, who might receive at the public expense a higher degree of education at a district school; and from these district schools to select a certain number of the most promising subjects, to be completed at an University where all the useful sciences should be taught. Worth and genius would thus have been sought out from every condition of life, and completely prepared by education for defeating the competition of wealth and birth for public trusts." - Thomas Jefferson to John Adams, 1813. ME 13:399

The first attempts to create standardization were, naturally, through education. Educational journals appeared - almost always containing at least one monthly study of Prussian methods - to disseminate "best practices." "Normal Schools" were established to train teachers in those "common norms" of instruction, behavior management, and content knowledge. Some states went further: by the late 1860s New York State already had standardized exams for secondary knowledge based in European models, though in most places curriculum remained a purely local decision.

Thus, defeating Jefferson, universities were left to find the "genius" through very imperfect methods - or through wealth and birth. Post-secondary institutions devised their own admissions tests or strategies for those available spaces not given to the children of wealth and power. Who deserved the ultimate in education? In an age increasingly dominated by complex technologies, in which nations competed in inventiveness and creativeness (think Marconi, Tesla, Wright, etc.), how would genius be uncovered, trained, encouraged?

At Harvard the issues began to be raised to a new level. Charles W. Eliot, Harvard's President for 40 years (1869-1909), didn't think much of his institution's oral comprehensive admissions examinations. He also thought that education, like manufacturing, would benefit from standardization. Why might Student A, studying with Professor X, read twice as much as Student B, studying with Professor Y? How could either the newly appearing post-graduate schools, or employers, judge that?

So Eliot pioneered both the "contact hour" and the idea of "credit distribution." The former was seen as a way of proving work - work in America (outside of agricultural labor and women's piecework) was now routinely judged in hourly terms rather than accomplishment. The latter meant that students would be exposed to both the "classics" (which had dominated universities) and the contemporary mechanics and sciences (which had risen in importance since the appearance of the Land Grant College).

Michigan Agricultural College's "Laboratory Row" in 1912
And then, as now, industry and big business joined in. For business, consumed with standardization, industrialization, efficiency, and preparation of future workers, creating an effective training structure - replicated across the nation as, say, time zones had been, was essential. So, into the fray came the Carnegie Foundation, funded by the biggest businessman of them all, Andrew Carnegie.

That is not to say that all the goals of the Carnegie Foundation were evil. As in most things, there was a mix of limited world view and good intentions. The people surrounding Carnegie were envisioning a meritocracy based firmly in the Protestant work ethic. They saw themselves as creating a Horatio Alger-esque path to success through doing well in school via "objective" standards. Exactly the same motivations which lie behind No Child Left Behind legislation and much of the American charter schools movement.

The Carnegie Unit lives with us today - truly, nothing structural has changed in US education since 1910. We still measure academics via seat time. We count our credits - both at the secondary and post-secondary level - by hours spent "in instruction" on specified subjects. Does it cripple us? Does it truly block reform? Does it prevent interdisciplinary instruction or open schooling?

"The unit affects the very way that knowledge is organized for instructional purposes, discouraging interdisciplinary teaching because of the difficult question of deciding how many units to attribute to each discipline. Those who would organize and convey knowledge differently inveigh against the "tyranny" of the Carnegie unit, asserting that seat-time is not a proxy for learning and that secondary schools must be flexible to engage students and to heighten learning." StateUniversity.com

The Carnegie Unit is a tyrant, but its tyranny is felt through attitude, not really through force of law. We see the power of the Carnegie divisions of knowledge because that is all most of us know. There are lots of ways around this. 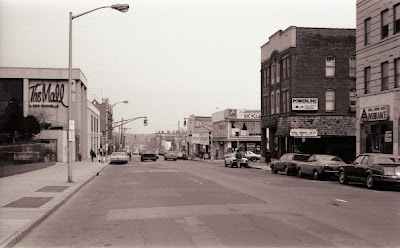 My tenth grade "English class" and my tenth grade "Social Studies class" were one internship with the late night radio guy on WVOX-AM. Two nights a week I'd walk over to the "K" building in New Rochelle, NY and head down to the basement studios. There, I'd spend for 2 or 3 or 4 hours with the crazy overnight news guy. We'd ride around in the station's Vista Cruiser looking for news, or sit at the tape machines editing interviews, or grab stuff off the AP and UPI teletype machines. What did I learn? I learned editing (though not in print). I learned writing (though orally). I learned how news was constructed. I learned how radio actually worked. I learned how politicians spoke, and what news readers did not report from those conversations. I learned the structure of my "home town" in a whole new way. It was powerful stuff.

And in the end I signed off on my hours - more than enough, and claimed the two Carnegie Units. Yes, I had to take Regents Exams to complete the credits, but that simply involved a couple of weeks of nonsense fact cramming. I passed both - barely - but who cared? But if I hadn't, the problem would have been the standardized test, not the Carnegie Unit. Students in my high school picked up biology Carnegie Units working in the hospital or the city greenhouse, math Carnegie Units working with surveyors or architects, English Carnegie Units reading on their own or writing for the school newspaper - often two or even 3 to a year-long project or independent study. Even the courses we had challenged the Carnegie structure while operating within it.

In other words, Carnegie Units are a bad idea in practice, but they are not the real problem. Our problem is our lack of imagination - and our unwillingness to take real risks in changing a broken system.

Kill NCLB, kill the standardized test, kill the Carnegian/Bushian/Obamaesque belief in all children learning at the same rate, and you will break the essential chains holding back education.

But the Carnegie Unit - yes, it is an unfortunate remnant of good intentions run amok - but it is also a very easy roadblock to walk around.

hi! i need a recommendation for a good book and/or your advice. my daughter has tourette's with ADHD and some OCD. If something interests her and doesn't contain too many unknown concepts, she has good reading comprehension. Otherwise, her mind drifts while she is reading and she can't retain material or attempt to even make sense of it. How can I help her? I was thinking I could help focus her attention by finding videos on the net that were related to what she is learning in school and watch and discuss them with her. That way she will have a frame of reference when she pure learning from the book, and so she will be able to have a hook that will help her concentrate. I do not want to give her and drugs. Thx. -v

This is a great topic, Ira; thanks for providing the very useful historical info. I think another aspect of the 'measuring of learning' dilemma that we're facing is that some kind of unit of measuring learning is used to pay teachers at almost every level. I worry that there will not be much movement away from using a seat-time unit of some sort until we create another currency for both teaching and learning. I think it is certainly possible to do it differently, but it might be even harder than getting the U.S. to use the Metric system (my 4th graders really have a hard time understanding why they need to learn both the Metric system and the 'Standard' system. I have a hard time trying to explain it, too.) But being hard to change is not a reason to not change.

@ Ira
I love your posts. So well put together. The history of how we arrived at our current state is fascinating. Thanks for putting this together I plan to share it with my staff.