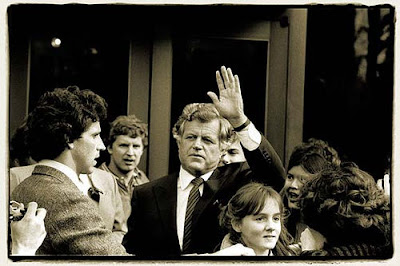 On a June night in 1980 I was a young guy living in Brooklyn and Ted Kennedy was a United States Senator running for President. A friend and I were crashing the primary election party at a Midtown Manhattan hotel.

For reasons lost in memory this involved an elevator ride up to the top. On our way down the elevator stopped and Ted Kennedy and Paul O'Dwyer got on. As we looked in shock, Ted put out his hand and greeted us. He asked our names, where we lived, what we were doing. He asked about my Brooklyn neighborhood - an edge of the Bed-Stuy community his brother Bobby had done so much to help - and how I felt living there. Even after we reached the ballroom level we stood there, Ted asking questions, and listening.

It was no more than ten minutes of my life - less certainly - and surely not my only celebrity meet, but I learned something essential in that encounter. Or, should I say, learned it again.

As a child I would watch my father enter a pub, a pub anywhere, or enter any other social situation, and I would hear him ask questions, and I would watch him listen. If I watched for an hour I would see him learn all about the people who surrounded him. "There is no one you meet," my father told me, "who you can not learn from."

My father touched a small circle of relatives and community in relative anonymity. Ted Kennedy touched hundreds of millions across America, across Ireland, and around the world. But that scale is not really a difference.

I don't have the magic skills of either of these men. I have a harder time 'meeting' a room, approaching strangers, making people comfortable. But I have learned the trick to the magic of a life well lived.

So I try to listen as well as I can. And I try to ask questions that allow the people I meet to be who they are and need to be. And throughout my life I have tried to do work which allows me to contribute to the world I dream can become reality.

My son is fond of quoting the first few words of F. Scott Fitzgerald's The Great Gatsby:

"In my younger and more vulnerable years my father gave me some advice that I've been turning over in my mind ever since.

'"Whenever you feel like criticizing any one," he told me, "just remember that all the people in this world haven't had the advantages that you've had."

"He didn't say any more but we've always been unusually communicative in a reserved way, and I understood that he meant a great deal more than that. In consequence I'm inclined to reserve all judgments, a habit that has opened up many curious natures to me and also made me the victim of not a few veteran bores. The abnormal mind is quick to detect and attach itself to this quality when it appears in a normal person, and so it came about that in college I was unjustly accused of being a politician, because I was privy to the secret griefs of wild, unknown men. Most of the confidences were unsought--frequently I have feigned sleep, preoccupation, or a hostile levity when I realized by some unmistakable sign that an intimate revelation was quivering on the horizon--for the intimate revelations of young men or at least the terms in which they express them are usually plagiaristic and marred by obvious suppressions. Reserving judgments is a matter of infinite hope. I am still a little afraid of missing something if I forget that, as my father snobbishly suggested, and I snobbishly repeat a sense of the fundamental decencies is parcelled out unequally at birth."

"Reserving judgments is a matter of infinite hope." Now neither myself nor my son was born to what most would describe as "advantages." I grew up with six living in barely four rooms. My son has experienced lack of many material things and many losses. But both of us know the advantages we were born to, and like Ted Kennedy and like my father, we know the responsibilities which come with those advantages.

On Monday - or whenever - as I walk through my university building, as you walk through your school - remember that all of those children, those students, are humans with stories, and voices, and things to teach us all.

And let us pause, and listen.

May God welcome home our brother Ted. I hope he and my Da meet and share a heavenly pint.

Your dad would be proud, Ira. Thank you for the wonderful post.

Pausing to listen, and learn. Thank you as always.

There are so many lessons in this, but thank you, most, for the eloquent reasons for why to reserve judgement!

Judging can be viral. Your wisdom about reserving judgment is well timed as teachers are readying themselves for school. You've reminded me to put on my cotton mask. Well done, as usual. ~S