Bringing the "Back Channel" Forward 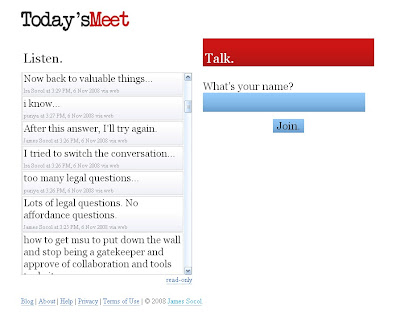 Whenever you "teach," there is a "back channel." It has always existed in every classroom, every lecture hall, every on-line learning environment.

In other words, students are talking, or passing notes, or rolling their eyes at each other as you talk, or asking for answers, or help, or complaining, or wondering, or wishing you'd get to stuff that somehow connected the topic to their interests.

I really began to appreciate the value and potential of this back channel a couple of summers ago taking an International Education course. Every time some claim was made Google searches exploded across the room, followed by emails: "That's not true." "Go this link." "The UN says this..." And after that burst of activity someone would interrupt the class with a new data set or collection of opinions.

So I wondered, could I create a dedicated Twitter-like stream that would make this back channel public? Bring it from the back to the front? No, not just me, many of us have wondered the same thing - including Google, who has built Google Moderator to do something very similar if you are in a school using Google Apps for Education (which will be my next post).

The idea was to allow this stream to run in parallel with the primary classroom experience. Make it quite public. Almost - but-not-quite - central. And in my case, to make it incredibly easy, do-able without registrations or log-ins.

So on Tuesday I tried this in my undergraduate class. I used Today'sMeet which is the creation of my son - so this is very cool. I set up an extra laptop and a second digital projector, aimed at a wall alongside the big screen, and I posted the link.

The first few posts were simple. "Hi" "Hello" "What's This?" But within fifteen minutes it had accelerated wildly. There were "tweets" (if you will) about the stuff in the class, and questions, and doubts, and worries. There were "procedurals" - "where's the sign in sheet?" "Is the due date still...?" There were requests, "I wish he'd talk about..." There were concerns, "This is distracting me" "More than Facebook?" "About the same" By the time the class session had ended, over 200 comments in all.

Every few minutes I looked up at the screen and checked the conversation, and typically I adjusted the discussion, or picked up on a question being asked there, or commented on an answer or a comment. In a big class it gave me real access to far more students than I can possibly get by watching for raised hands. And it let me - and the class - hear from many who never raise their hands. Honestly, I could even judge, much more clearly than usual, what was connecting and what was missing. As an instructor - I loved it.

OK, yes, I know this is a highly controversial idea. On Classroom 2.0 one teacher, not an anti-technology one, says of an experiment like this: "Kids today are fritzy enough without trying to listen and do several other things at the same time. To me this is the consummate use of technology to no real benefit and it plays right into the scatteredness of many kids today. It allows students to talk throughout the entire presentation. I just don't get it. I may not be articulate enough to explain myself but I just keep thinking of Leno's comment to Hugh Grant after Grant's dalliance with a lady of the night...."What were you thinking?"'

But on another blog, another teacher references using another "chat room" technology: "It also demonstrates the power of the backchannel. I personally believe that the backchannel is the greatest unharnessed resource that we as educators have available to us. It does not threaten me nor bother me that you learned as much if not more from the backchannel the other night -- in fact, it makes me feel great that I facilitated the connection." So, as in everything else, there's a range of teacher response.

But what I watched was student response. In the room Today'sMeet began to overwhelm Facebook and Email use in the room. The distraction technology became engagement technology, just as using polleverywhere switches mobile phones from distraction tool to engagement tool. And we all learned more using this than we would have without using it.

And that's not even touching on the ways this kind of technology supports the shy user, the user with speech issues, the user having trouble with the English Language, the user who'd rather be able to think through and even edit a statement or question before asking it.

Today'sMeet is free, requires no registration or log-in. Just create a room and point your students to it. To see an example - our conversation on Google Apps - look here.

I have been using back channeling in my university teacher education classroom for about 6 months now. Students use the back channel to record their thoughs, ask questions, take notes, bring in external resources from the internet into the discussion and to simply make comments about the topic at hand. I project the back channel onto a screen so that it is always visible and can be referenced as the classroom discussion are underway. I admonish the students that I do not mind if they are on the internet doing activities as long as those activities are making a contribution to the activities in class. They can contribute either on the back channel or through traditional oral sharing...or both. The students report that they find themselves more engaged in the class discussions and activities. Student who have traditionally been passive in class because they are not ones to speak in public or feel that their thoughts are always stated by another classmate before they are able to do so. I perceive a lot of underlying learning that is occuring as well as students are researching definitions and/or concepts that are being discussed in class and are pulling and presenting background and supplemental information about those topics to the class via the back channel. These contributions often then translate into a multitude of teachable moments. While not all students in the class participate on the back channel, many state that they benefit from it because it allows them to put together different pieces of the topic and provides a record of the discussion as well. All and all, a great tool. Now if we can only get one to read to the students that need it as well!

can't the students who need it read have earphones on and have a program that allows text to speech? they could do what my daughter does with her ipod and just have one earphone in. anyway, what's interesting to me is that we as teachers expect that students silently listen to us talk, but when teachers get together for a workshop or meeting, especially if it's big, they are always talking to each other quietly about what's going on. it's like what notetaking is to some people, it allows you to focus better, not to mention clarification. the teacher has to be flexible cognitively to deal with adjusting their lesson to address the comments. some teachers will not like it because they can't turn on a dime like that.

I'm in a graduate program and I wish my professors would consider using a back channel like this to keep me focused and involved with the peers in my class. I regularly plurk away during class to get feedback from my virtual peers, but often the students who I am with f2f, don't want to participate in that type of back channel because they don't want their identity online. Did you have 100% participation with the undergrads in your class?

On another note, I think back channeling would be a great tool to use in the fifth grade classroom that I teach in. I think we'd get 100% participation from all the kdis. My co-teacher @LParisi and I have been considering using a Cover-it-Live blog on our website to have a whole class back channel discussion during lessons. We've tested it out with a small group during our recent election debate and the students enjoyed it. I would like to see how it would work with over 20 students.

Brian: What system do you use? Glad to know it is working elsewhere.

Weila: Yes, because it is running online you can simply use Firefox/Click-Speak and hear every comment. And yes, teachers will need to learn a new level of interaction.

Christine: I think the art of bringing this back channel forward can work at almost every level. Traditionally teachers either deny the back channel exists, or attempt to suppress it at every turn, believing that it is (a) always disruptive and (b) usually "cheating." But I see it as (a) typically engaging and (b) usually collaborative.

Anyway, we had about 80% involvement - great for a start. I'd try it - even in 5th grade. Why not? Remember, unlike the old-fashioned back channel, this one is public, you - as the teacher - will know exactly what is being said. That helps students learn communication skills while they learn subject matter.

I've used services as simple as Chatzy and CoverItLive...though I like Chatzy because it allows the whole class the opportunity to get involved and it has the option of saving the chat log. I've also used the chat feature in Blackboard and that has worked...eh...well.

Chatzy is similar to TodaysMeet in non-registration ease of use. We're not a Blackboard campus - stuck with Angel, the worst LMS imaginable.

we are an Anti Bullying Team exploring alternative ways for young people to recieve help and support with issues that effect them. Are you aware of anyone using todaysmeet for any other pupose? Any thoughts on the idea of using it for a issue based work?

One of the ways schools encourage bullying is by separating "real world" communications from classroom/in-school communications. So schools try to ban, rather than engage, the "back channels" by keeping blogs, twitter, mobile phones and texting out of the educational process, these systems - which are heavily used by students, become rogue, unsupervised, places.

One of the wonders of systems like Today's Meet (which are - in "closed" - registered user - forms - available in most digital learning environments) is that it brings what is typically hidden into view, and allows adults to interact with it in ways that help steer things. So if you, as a school faculty member, see students being rude, being exclusive, being cruel in these digital forms you have a chance to intervene, since you can be sure this is just one form being taken for this bullying.

In many ways these technologies allow us to return to the best of "small town values" - you know, when kids played in the street and parents overheard the conversations, or when older siblings supervised social interactions. Before the last 40 years or so, most student social interactions were "mediated" this way. It is not the anonymity of the web that has caused this problem, it is rather the separation of contemporary life - parents at work or in their master suites, kids in single age places or in "family rooms," schools built on ever more separated age models - which has allowed bullying to flourish.

Engaging these ICTs is one critical way to turn this around.

Cool idea! I found blogged about the Chronicle article here, and tracked your comment to your blog.