"and we love him anyway"

I don't want Sarah Palin as an advocate in the White House for "special needs" children.

OK, I don't want a right-wing politician who thinks war is fun, and that Alaska should secede from the US, and who lies every time she speaks, to be anywhere near the White House for all sorts of obvious reasons, but that's not what I'm saying here. 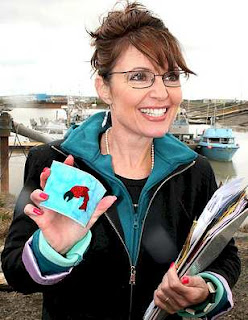 I am saying that I do not want someone with her view of "disability" advocating for anyone who is perceived as "different." Because Sarah Palin pities people who are different. And because Sarah Palin thinks she deserves special thanks for treating people with "disabilities" as if they are human.

Governor Palin has chosen to make this an issue. She not only prominently displayed her "special needs" infant when her candidacy was announced, she dragged the child (along with an adolescent daughter and her "redneck" boyfriend, both of whom might have preferred a bit of privacy as they deal with an "unexpected"1 pregnancy) to her acceptance speech and made a big point of her role as a "special needs mother" in that speech.

She hasn't really spoken of it much since, which is logical, since Governor Palin opposes all the things which might "normalize" life for "special needs" children - universal health insurance, increased K-12 education funding, requiring school voucher accepting schools to accept all applicants on an equal basis, mass transit funding improvements which would improve mobility, and public housing assistance. But she still wants credit for it.

Well, Governor - lots of Americans have chosen to have children who might be different, and lots of us think of them not as "special needs" but simply as "children." You don't get special credit simply because you gave birth to a child, you get credit for what you do for children. And perhaps the very first thing a parent should not do, is to literally hold their child up in front of the world and declare, "there's something wrong with him!"

Sarah Palin claims she will be an "advocate" - so the question is, an advocate for what?

Will she advocate for free or extremely affordable universal health insurance that would guarantee equal access to pre-natal, post-natal, well-baby- and preventative child care?

Will she advocate for free or extremely affordable universal health insurance that would keep parents healthy, and thus able to properly care for their children?

Will she advocate for parental leave for all employees which would allow every parent to care for a child's needs without fear of losing their job, health insurance, and/or home?

Will she advocate for the massive increase in K-12 education funding needed to allow every public school in America to fully embrace universal design?

Will she advocate for dramatically improved teacher salaries so our best and brightest students might tend to choose education as their field rather than Wall Street?

Will she advocate for a requirement that any school receiving any public money whatsoever accept all students on an equal basis and provide transportation?

Will she advocate for massive mass transit funding increases which might allow those not blessed with physical and economic driving capabilities to live and work where they want?

Will she advocate for public universities doing more than the absolute minimum for "disabled" students? (I'm sorry, but the disabilities "guide" from the University of Alaska isn't even an accessible PDF)

Will she advocate for universally enforced accessible housing standards?

Will she advocate for improved housing affordability for those in poverty (who, of course, include many disabled adults)?

These are the things which will change things for children who are different. Really, these are the only things that will truly offer access to success, equality, and independence. Unfortunately, every one of these things is opposed by the platform and policies of the US Republican Party.

But Governor, we don't want your sympathy. We want your action. You claim to be "independent." Good, demonstrate that. Embrace at least Obama's health care plan and his education plan, or, preferably, go further. Say that John McCain was wrong to vote against taxing extremely rich people a bit more to fund education which works for all children. Declare that any school which does not provide full equal educational opportunity for all children will not just lose any public funding, but will lose their tax-free status.

And please Governor Palin, please - stop announcing to the world all that is wrong with your child. It demeans your child, it demeans you, and it merely reminds us of how far America has to go before it truly stands for equality of opportunity.

1 - If Barack Obama had brought a pregnant teenage daughter and her child's father - say a black high school senior who had described himself as a "f---in n-----" on his Facebook page - onto the Democratic Convention stage I imagine Fox News folks might have used other words to describe the situation.
Posted by irasocol at 9/15/2008 11:28:00 AM

Well said. But as you know, America's always been the home of huckster opportunists.

Sarah Palin has been the parent of a child with special needs for a few months. She doesn't know what it means yet, and she isn't likely to ever really know. She hasn't yet, nor is it likley that she'll ever have to walk in to a school or govt. agency to fight and scratch for a small percentage of what her child really needs. She doesn't know what it is like to tell people day in and day out that her child is a human being and should be treated with the same dignity any other child is treated with. I wonder how she will handle the first person to calls her child the "r" word?

I wonder, is her offer of advocacy only good so long as she makes it to the white house?

Palin is the worst. She just gives me the chills. You are a cool person. I stumbled upon your blog after reading your comments on an article about the banning of internet in lawschool courses. You're lucid and transgressive...few people can honestly claim to be both.

As someone for whom conventional education just hasn't worked, I applaud you for your efforts, and for not blaming the kids.

I'll be reading you regularly from now on.