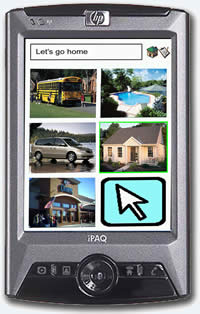 The Cyrano Communicator is one of the new AAC devices based in the Pocket PC. The Pocket PC (Microsoft Windows based PDAs) offers a dramatic change and upgrade for those dependent on assistive speech. They are no longer tied to large, limited function communication boards, nor are they tied to big, heavy laptop computers. The carry anywhere, highly powerful, wireless and bluetooth equipped Pocket PCs weigh just 6 ounces.

The Cyrano has some especially nice features. The built in camera allows you to easily build multi-level photo menus for speech, and for text input there are four options:
"Keyboard Input- This is a conventional keyboard displayed on the screen. The keys are small, and the method is slow, but it is easy to learn and very accurate.
Transcriber- The Transcriber is the most natural of the four input methods. Just write your words anywhere on the screen using any combination of cursive and block letters. The program translates your writing into letters in the text box. This method is fast and easy to use, but not very accurate. If your handwriting is neat, this may be a good option for you. The computer can learn your writing style after a while, so prediction becomes better with use. 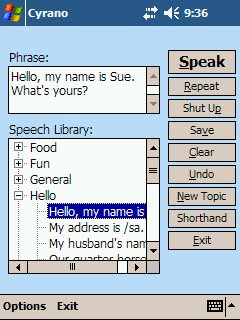 Block Recognizer- Block Recognizer is similar to the interface used on Palm™ machines. Short keystrokes, called “graffiti” style of writing, produce letters."
... or you can connect a bluetooth keyboard. Giving you plenty of ways to get thoughts in, and thus out, and because of Cyrano Shorthand - a great little abbreviation utility, building complex messages out of three and four letter combinations is easy.

Cyrano comes with five voice personalities - 2 American men, and a British man, a British woman, and an American woman, and comes fully loaded with software for about $1200 (US). Options include SD Memory cards - available anywhere, the above-mentioned Bluetooth keyboard, and an incredible waterproof tough-case (built originally for surveyors) that's just a hundred bucks.