Getting to Making, Getting to Education which actually Works

"He was a kid with a lot of issues," our teacher told a crowd at the World Maker Faire at the New York Hall of Science (NYSCI) last weekend, " you know, getting into trouble all the time, real crazy stuff." We were discussing a summer school for Middle School - not often the happiest place on earth - but one of our summer schools converted into a Maker Camp, with all content taught through student generated projects.

"Now he couldn't pass math, he had never coded anything, he really didn't know how to use any tools, but he did love baseball. We told him, we told all the kids to just find a project and start it. This kid built a pitching machine which used an Arduino and lasers to determine pitch location. He did that in three and a half weeks."
OK, what did this child learn? And how might that learning be compared with his learning in a traditional educational setting?

We are trying to go "all in" on Making because we believe it is the right way for kids to learn. "Learn to Make, and Make to Learn" is what we say. In doing so we are trying to undo a century and a half of education designed to filter kids out, to stratify, to limit, and to train compliance.

We think that our children all need to have the opportunity to succeed. We think that in these times our nation and our world need everyone contributing to our society to their highest capability. Our school board has declared that we have just one strategic goal, to "unleash potential" of our students through helping them achieve our "Life Long Learning Competencies." And we aim to unleash that potential by following our "Seven Pathways" to a new form of pedagogy.

The day after the fair, as our teachers sat with the "informal educators" of NYSCI discussing Maker Education and debriefing the fair, a fourth grade teacher told of a building project designed to generate improved writing skills in a class of mostly rural kids who, "can tell you every kind of story, but froze when asked to write it down."

So with thick cardboard tubes and all kinds of junk and lots of hand tools, her kids built creations of their own imaginings. As they built they used Google Forms to answer simple questions, requiring one, two, or three word answers at first, then moving up. From "are you finished?" to "what do you want to do next?"

This "making" filled the reading/writing time in her class, and more, and might have seemed like a 'wasteful diversion' to some less observant observers, but after a couple of weeks, when the kids had created their creations, they began to write stories about what they had made. Now, to quote one of the NYSCI team, they already had "skin in the game." Unlike most school writing assignments - whether in fourth grade or twelfth grade - which are essentially meaningless exercises disconnected from any student's actual existence - kids who had spent a couple of weeks making something fully theirs had stories they were quite anxious to tell, and to tell to a wide audience, so they wanted to write.

So, she said, they wrote and wrote. In pairs or as individuals they grabbed laptops and wrote, and as they wrote and edited, they gained all kinds of skills - from what we refer to as "text entry" - not touch typing but feeling confident that you can get text on a page one way or another - to the basics of grammar - and they did that without anyone sitting at a desk staring at a teacher in front of a board. She ended by noting that one of her 'cognitively challenged' students wrote a full three-page story about her construction.

We came to the World Maker Faire because we believe that it is an extraordinary professional learning opportunity, not just for those who can make the trip, but for the teachers those teachers can influence. We see learning opportunities in this kind of event - or similar trips to places like the Chicago Children's Museum - that simply seem impossible at 'education conferences.' Here we see how informal educators educate - which is essential for us to learn. I know that I often ask: "Why would children come to your school if they didn't have to?" And informal educators work in a world where they must get children to voluntarily come to them and participate. 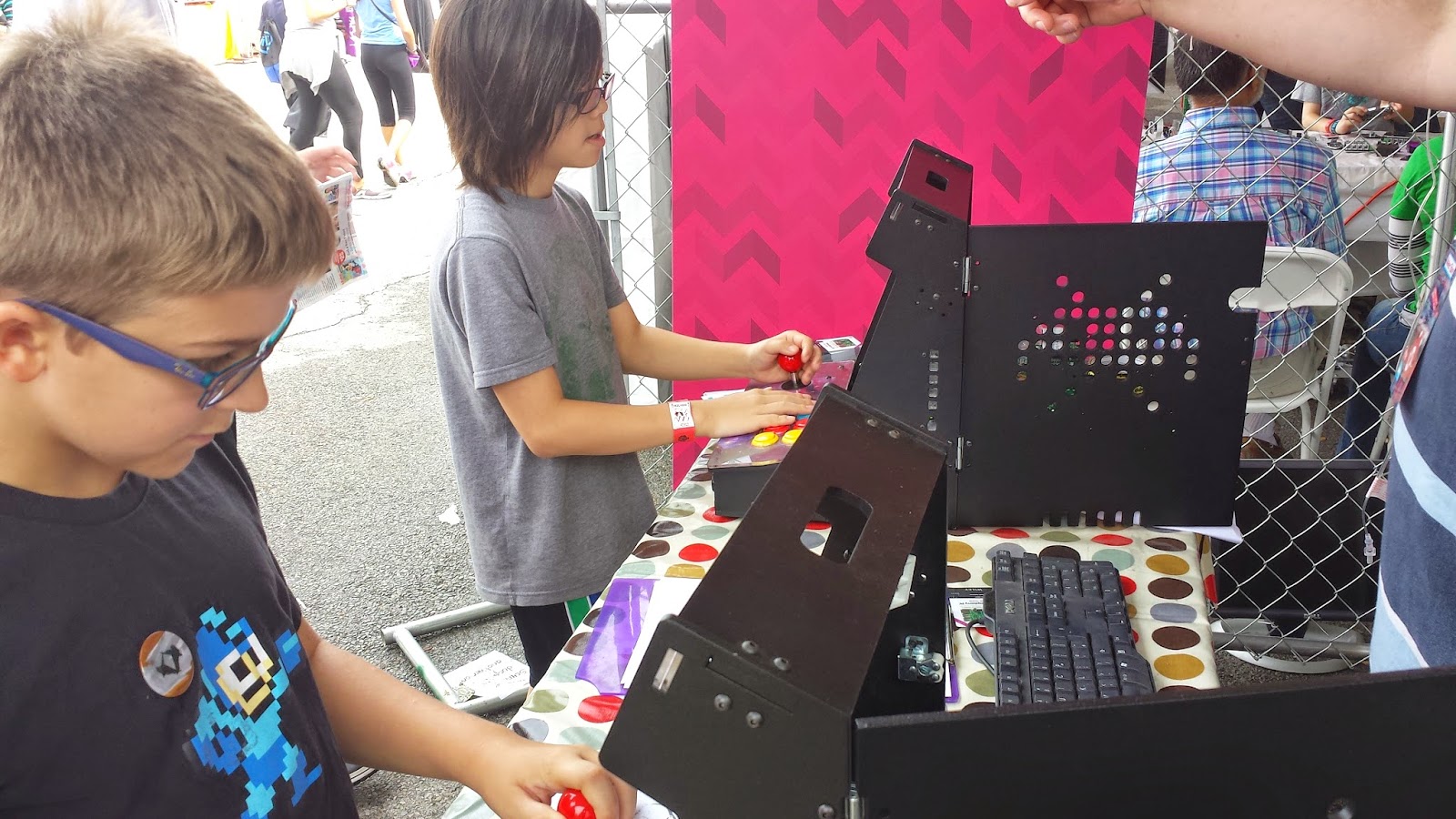 So when we talk about engagement we probably won't find it in canned programs from educational consultants who offer us classroom plans. Instead we need to look at, and adapt, ideas from people who literally have just seconds to grab attention, and who must continuously hold engagement through individualizable experience. It's not that we can throw a massive party every day like Maker Faire, but we are learning that Making to Learn allows the children themselves to create their own engaging context.

One of our high school teachers told the story of our summer "Pop Up MakerSpace" in a borrowed doublewide in, umm, a "socioeconomically challenged mobile home community." Also a community where speaking English can be a rare thing. We honestly didn't do much planning, he told people, we borrowed the space from a church, we hired someone quickly to add electrical capacity for lighting and computers, we borrowed a variety of tables and seating from the closest high school - also a laptop cart. We brought in lots of cardboard, lots of tape, lots of scissors, some wires, some soldering guns, some hand tools, oh, and a MiFi. And we began. "C'mon in and make stuff," we told the community, and the kids came. Kids 4 through 19, including he remembered, two kids who came within 12 hours of their family arriving in the country. And as they "made" they learned vocabulary - "you're making a house? that part is the gable." "you're making a circuit, let's talk about the wiring..." They learned the mathematics of measurement, the science of geometry and the physics of electricity. "And the kids loved it so much, their parents started coming, and learned to use the sewing machines we had borrowed, and in the end they took over one room of the trailer and started their own cooperative business making things."

Later, with the NYSCI group, he described how his computer science class operates. They work on what they want, from video games to Android Apps, and essentially his curriculum is that students create their own internal Stack Overflow database, which grows each year, so each group of students builds on the knowledge base of those before. Making has a simple role in schools, my friend and colleague Chad Ratliff says, "it is putting content into student-created context."

Whatever we do, from learning to edit those words that matter in a seventh grade middle school room... 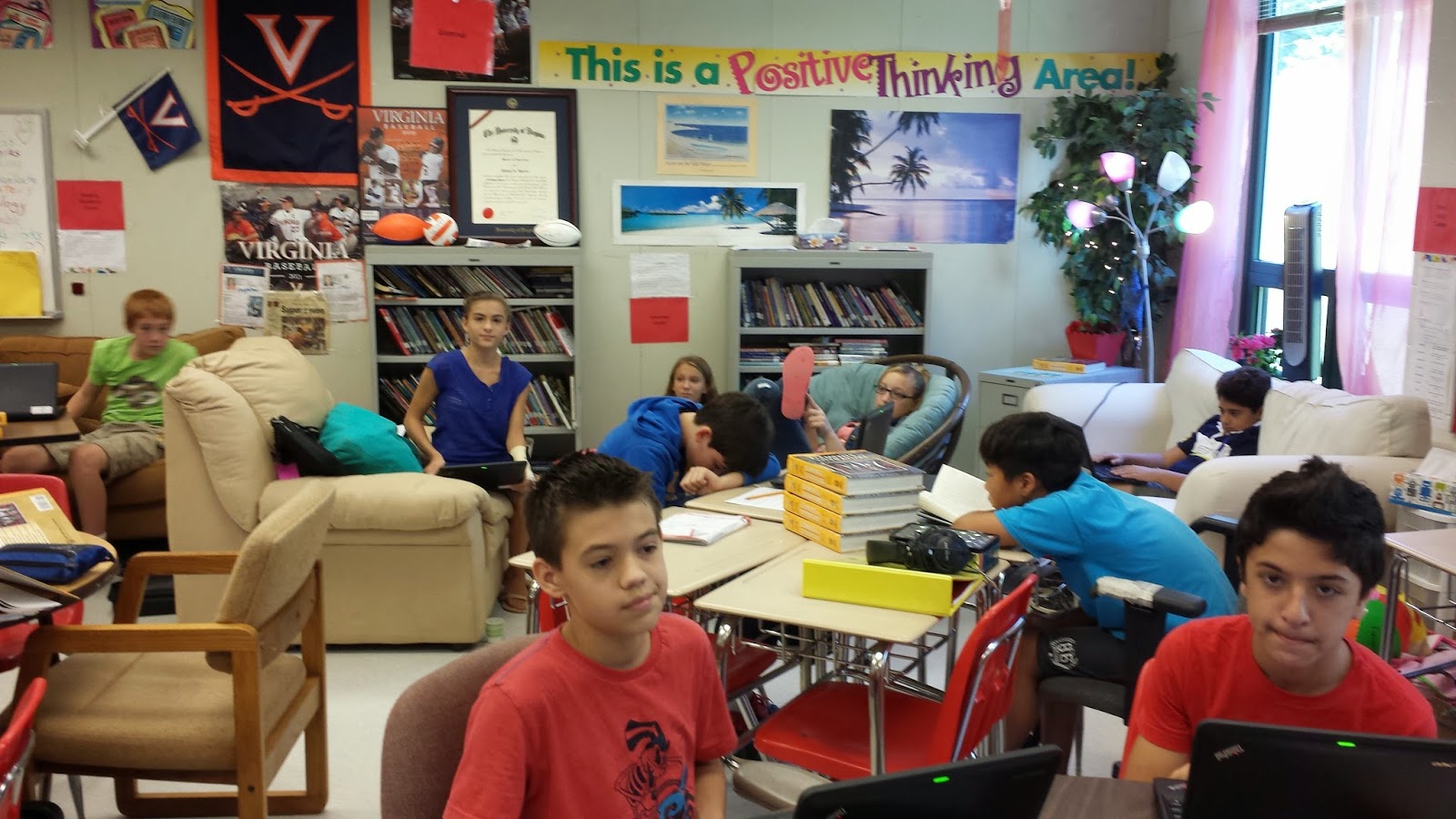 ...to developing language skills, engineering skills, and math concepts in a music studio...

...that's the high school principal on the far right...
the music studio cost us about $5,000 including construction - it filled an old computer lab

...to putting science and engineering and entrepreneurship together, or learning history through reverse engineering historic technologies and printing them on a Makerbot, we see Making as the path to engagement, and engagement as the only way to get kids on the path to learning.

One of our middle school teachers, whose engineering/shop students collaborate across the curriculum, and who have made everything from a reimagined 1837 electric motor to sound amplifying stands for their phones, told the story of a sixth grader coming in and saying, "I want to build a batmobile."

"Why would you want to build a batmobile?" the teacher recalled saying, "isn't Superman better? He flies, he doesn't need a car."

The child considered this for a few moments, then said, "Maybe I'll design and build my own kind of car." "Now we're going someplace," the teacher responded.

And if we can't teach every middle school subject through a student's desire to build his own car, what kind of educators are we anyway?

It is truly amazing and absolutely fantastic what can happen when children are gifted given a choice and when they are inspired. It unleashes an amazing potential and allows them to overcome so much! Thank you for sharing these stories. They share so much about what students can do and what educators can do when when we start thinking outside the box and thinking big!!