There are many words and phrases I'd love to toss out of our educational vocabulary. "Rigor" is, of course, a big one. "Flipped Classroom" is another - unless we're going to really try the old Fred Astaire-Royal Wedding thing. "Special Needs," "Special Education," and "SpEd" are others because it is way beyond time to embrace Universal Design for Learning, full inclusion, IEPs for everyone, and Toolbelt Theory for all. But here I am with one more... the dreaded "Evidence Based Practice."

"Evidence Based Practice" sounds so good, sounds so authoritative, sounds so "medical." It is, after all, medical. The term was "Evidence Based Medicine," and like the "Gold Standard" research promoted by the AERA and the US Department of Education, it sounds great to the uneducated, but remains not just impossible to transfer to the field of education, but undesirable.

I heard a medical researcher on NPR this week describing how a highly effective counter-treatment to the side effects of antibiotics couldn't really spread because it could not be evaluated the FDA "gold standard" way, and it reminded me of how evaluation systems stymie innovation everywhere. 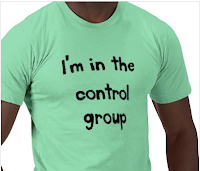 But even if these research and practice paradigms worked fully in medicine... we still could not, and should not, import them. First, it is not possible to do a "double blind" trial in education, the practitioner surely knows what "treatment" is being used, and so do most students (we often might as well give out "Control Group" T-shirts) so the "Gold Standard" promoted by AERA

is simply fraudulent. Then there's the undesirable - we are educators, it is malpractice for us to withhold interventions from students when we believe they will help.

And so if the methods of collecting our "evidence" are both fraudulent and irresponsible... where does that leave "Evidence Based Practice"?

It leaves it as the tool of those who want to preserve - to harden - the industrial-process nature of education, and as the tool of hucksters with products to sell, like researcher-salesmen Slavin and Marzano. As Peter Smagorinsky says, in terms of how the US Department of Education operates:

"Consider the ways universities operate. Universities initially compete for students, but once they’re enrolled, that game is over. After enrollments are secured, universities compete for prestige, and the game is not zero-sum: The more prestigious universities, the better the nation is served. The U.S. university system is not centrally organized, so each campus competes in its own way. Public universities are bound by state regents systems, at times intrusively; but for the most part are entrusted to be the institution they want to be. Innovations are very public and available as models for others to consider. Indeed, the publishing imperative forces good work out into the open and contributes to the status of the institution as others seek to adopt it. This approach works well for universities, but public school teachers are not entrusted with the same opportunity.

"The competition and innovation that local control would promote would enable teachers to exercise judgment, an opportunity that is rarely available under the current testing regime. Just as importantly, it would help to shape the incentive system within which education takes place. Presently, young people looking for a field of endeavor read daily attacks on teachers and schools, and see a punitive, assembly-line approach to teaching that follows from standardized curriculum, instruction, and assessment imposed by Washington bureaucrats with no teaching experience. Replace that image with a workplace where teachers’ ideas matter and their innovations are appreciated as dynamic and worthy of admiration. Which environment would you decide to enter if you were a talented young person looking for a rewarding career? Most teachers I know say that they want to teach because they want to make a difference. It’s hard to make a difference when the system rewards those who make everything the same." - Peter Smagorinsky, Distinguished Research Professor of English Education at The University of Georgia and included in Valerie Strauss' Washington Post blog The Answer Sheet, March 28, 2012

I am not against "evidence," we all collect "evidence" to support our actions or to suggest change in our actions every day, but I am also for innovation and creation and experimentation every day, especially in schools. For example, I have never repeated the same "class" - not even when teaching the same thing three times in a row. I learn from each presentation and then adapt, that's my evidence based practice, you know, "well, that didn't work," but there is something else creating the change - the "audience," the interactions change every time - and I can not let "evidence" from a previous experience interfere with the need to innovate, improvise, based on the needs currently before me.

This is the problem with "Evidence Based Practice," with "Common Core," with any enforced "National Standards," all limit our possibilities by enforcing "what is" as Gary Stager noted on Twitter: "All capitulations to national standards reduce your ability to make decisions as a teacher." All capitulations to the "scientific evidence" requirement prevent innovation.

What we need instead in education is a nation, nations, of experimental researchers working constantly with Grounded Theory based Action Research. All teachers as innovative experimenters, all schools as laboratories of what might be possible. This is essential, because otherwise we are, to use the metaphor for this week, simply re-arranging the deck chairs on the Titanic because we saw them arranged differently on the Central America.

In other words, our current praxis, our commitment to "Evidence Based Research," is utilizing fraudulent research paradigms to investigate micro-changes in a system developed not through science or research at all, but as a Social Darwinistic effort to prevent social change which might threaten power structures. [See the Five Part series - Designed to Fail.] 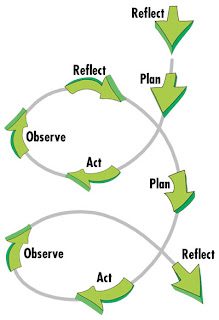 Putting together Grounded Theory [link is to a pdf], the observation-based data collection concept which accepts that the real world is more powerful than the laboratory for social structures,  with Action Research, the continually adaptive method of applying developing knowledge to the solution of problems in addition to the study of them, allows us to form a circle which moves us - and more importantly - our students forward. Forward into a world wholly unrelated to the Henry Barnard - Ellwood Cubberley structure of education which remains intact even when "flipped" or "flattened" or privatized.

You learn to see your classroom anew. You observe all the possible options. That becomes your data floor. You make changes, observing the results, constantly observing, recording, and adapting to the inflow of information. You are educators. You are not going to trap a control group of children into a failed reading system for 5 months in order to prove that system works - you are going to keep searching for solutions for those kids - but you are going to do it like researchers... recording your observations, your changing efforts, and your successes and failures, and then sharing that with the world of education - wholly and freely.

Which has to be our goal. To move rapidly into the future, where our students already reside. And we're not going to get there buying ten-year-old crap, that we collected "evidence" for five-years ago.

Well it seems somebody - such as Marzano or Slavin- I guess gets to do the cool "invention" work. Then, educators get to wait around until we read about it in a journal behind a pay wall or at some high dollar conference or maybe a "free" webinar sponsored by some company who paid for the research. The feds like it so much that it gets put on a list of "approved programs that work." It comes neatly wrapped with PD,
assessments, corporate consultants, and company- sponsored events to ensure program fidelity. The folks in the field who themselves are incapable of thinking for themselves as inventors, designers, action researchers get to see their district's precious federal dollars spent on such evidence- based practice programs as occurred with those in the touted Reading First grants. One of the best decisions I ever saw a staff make was raising their hands in an unanimous vote to stop doing Reading First, abandoning A expensive literacy program along with companion coach who came to enforce fidelity. We sent some 100ks of dollars back to the Feds. The teachers started thinking about And owning their own efficacy and strategic Design think focus on teaching children reading again. The scores went up. The teachers And children became happy because they were no longer hostages to a program in a box, a 3-ring binder, and on a screen.

Has anyone ever tested how effective desks and chalkboards and notebooks and pencils are? Waiting for evidence (on the part of research studies) before adopting what you know from personal experience to be effective, is not an option we should be comfortable with.

Hello. I’m Greek so I don’t know well the educational system in US. From my experience I believe that we’ll have more benefits if we collaborate with researchers like Marzano or Slavin. I’m fan of action research, but alone isn’t enough. There are plenty educational research practices most of them cannot be used from us. This doesn’t mean are useless. It means that we have to test their promises using action research.

Umm, seriously? Have you ever done grounded theory the way Strauss & Corbin describe it? It's not a good fit with action research at all, because it takes a lot of work and a long time to develop theories. I think what you really want is realist evaluation or theory-based evaluation.